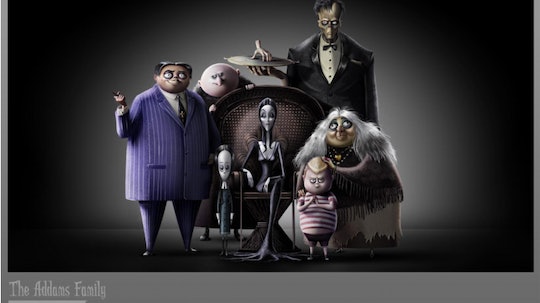 The Addams family. Those three words are all you need to hear for that unbelievably catchy theme song to get stuck in your head for an entire day. Although the story of this iconically spooky family has undergone several facelifts and re-boots through the years, fans couldn't be more excited about the newest film hitting theaters in 2019. This time around, though, Gomez, Morticia, Wednesday, Pugsley, and the gang will be CGI-animated. And it looks as if the new Addams Family movie will be a hit with kids and parents alike.

As Variety reported in December, MGM Studios is working on an animated version of our beloved The Addams Family. Initially, there weren't too many details spilled with this initial bit of news — other than the fact that Oscar Issac would be voicing the character Gomez. (And if that name doesn't ring a bell, Issac played Poe Dameron in Star Wars: The Last Jedi.) On Tuesday, however, more details came to light. That's because MGM released the rest of the voice cast for the film, as well as the first image, PureWow reported. So here's the all-star lineup as we know it: Charlize Theron will be playing Morticia, Allison Janney will be the "Addams family archnemesis" Margaux Needler, Bette Midler will be Grandmama, Chloë Grace Moretz will be Wednesday, Finn Wolfhard will be Pugsley, and Nick Kroll will be Uncle Fester.

The plot of the newest installment of The Addams Family was also revealed, Variety reported. "The story will follow the Addams family, whose lives begin to unravel when they face off against a crafty reality TV host while also preparing for their extended family to arrive for a major celebration." Hmm, definitely sounds modern. I'm intrigued.

The directors also shared a little behind the inspiration this upcoming film. “Greg and I have always been a fan of the Addams Family in past versions, so when we set out to make this movie, we were excited to do something new," said Conrad Vernon, who is co-directing the film alongside Greg Tiernan, The Deadline reported. "With that in mind, I drew from the brilliantly original Charles Addams New Yorker cartoons for the look of the film and decided to tell the story of how Gomez and Morticia meet, find their house and start their family. This unique approach is what drew me in to direct the film." He continued:

The reimagining also extends to the stellar cast we’ve put together who will each bring their own spin to our film that will appeal to longtime fans of the Addams and introduce them to a new generation. Conrad and Greg are masters of animation with the keen ability to create something both kids and their parents will enjoy for different reasons.

Judging by Twitter responses, fans of the Addams family seem pretty pumped about the upcoming movie. "uhhh oh my god, did my entire timeline completely ghost on the fact that THE FIRST IMAGE FROM THE ADDAMS FAMILY ANIMATED FILM JUST DROPPED. OSCAR ISSAC IS GOMEZ. GUYS." one particularly pumped Twitter user wrote.

Another Twitter user was impressed with the animation. "Can we just take the time to appreciate how much the new animated Addams Family film looks almost straight out of the comics?" they tweeted.

However, many are also disappointed that the film won't be a live-action one. "We’re finally getting a new addams family where oscar isaac is gomez but it’s a cartoon that looks nothing like him and if that isn’t the definition of a true monkey’s paw curse then i don’t know what is," on Twitter user lamented.

Another Twitter user expressed his disappointment. "Studio: We're gonna reboot Addams Family with Oscar Isaac and Charlize Theron. Me: AWESOME. Super excited. Studio: Here's your first look: Me:," they wrote, along with a still of Justin Timberlake giving a "come one, really?" face.

Yet another Twitter user chimed in with, "Can’t we just have another live action Addams Family with Charlize Theron and Oscar Isaac as Morticia and Gomez instead?"

Others were particularly bummed that they won't get see Oscar Issac play out the role of Gomez in real life. "We all know Oscar Isaac has the voice of an angel, but his Gomezy face is being wasted by having him in an animated #AddamsFamily movie," they tweeted.

(This person does have a point: Just look at that face!)

In my opinion, combining the Addams family's morbid sense of humor with animation sets this movie up to be ideal for both parents and their children. The only "bad" news? We'll have to wait until Oct. 11, 2019 for the film to be released. Hey, at least it'll be just in time for Halloween!