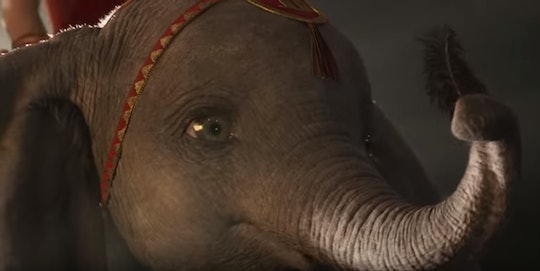 I remember watching Dumbo as a kid and then again when I had my own kids. I didn't really understand the deeper meaning behind the 1941 Disney story about a misfit elephant who could fly as a little girl. But then I grew up a bit. I didn't always fit in, sometimes I was lonely and awkward and nervous. I became a mother who wanted to protect my kids. And then I watched Dumbo again with fresh eyes. That cartoon hit me like a ton of bricks. And I have to tell you, if the new live-action Dumbo teaser trailer shows us anything, it's that director Tim Burton has a real sense of how moving and sentimental so many fans found the first film. So much so that I think he's ratcheting it up a notch.

This latest trailer features short interviews with some of the cast members: Danny DeVito (playing circus owner Max Medici), Eva Green (playing aerial artist Colette Marchant), Colin Farrell (playing elephant handler Holt Farrier), and Michael Keaton, who rounds out the cast as the suspiciously slimy circus entrepreneur V.A. Vandevere. They offer a sneak peek behind the scenes of what promises to be a very special film. About misfits and friendship and, of course, about the power of believing in yourself.

(Disclaimer: get some tissues before you watch this because you know you're going to cry).

In this video, Danny DeVito points out some pretty major plot point changes in the upcoming live-action movie, which is set to be released in theaters on Mar. 29. For starters, the 1941 Disney classic cartoon Dumbo didn't see the young elephant with the big ears fly until the very end of the movie, after his mother Mrs. Jumbo was chained up and forced to leave her son. After he was turned into a circus clown and ridiculed and mocked. The flying element was the climax of the movie; Dumbo's great success.

This time around, Dumbo flies at the outset of the story.

The story for the new Dumbo live-action movie revolves around Holt Farrier and his two children, who love the sweet elephant and want to protect him from the potentially dangerous V.A. Vandervere (who would seek to exploit him). It seems like a perfect film for Tim Burton to direct, as Eva Green noted in the new trailer:

Tim Burton is directing. He understands outsiders, people who don't fit in... vulnerable souls like Dumbo.

And if that doesn't make you cry, do you remember the scene when Mrs. Jumbo is locked up and she rocks her baby elephant in her trunk to the tune of the song "Baby Mine?" Yes, the new film will include that song. A new version by Aurora. That's honestly enough to make me bawl right now.

Dumbo is one of those stories that both parents and kids can connect with in very different ways. For kids, it's all about people being mean to a baby elephant until they see he can fly and then he wins. For parents? It's about being a misfit, feeling along... and finding your way nonetheless.

More Like This
Teachers Reveal The Go-To Movies They Love To Show In School & Why
All The Family Movies We’re Looking Forward To Seeing In 2022
Netflix Has Lots For Families To Look Forward To This August
A New 'Golden Girls' Themed Restaurant Is Happening!