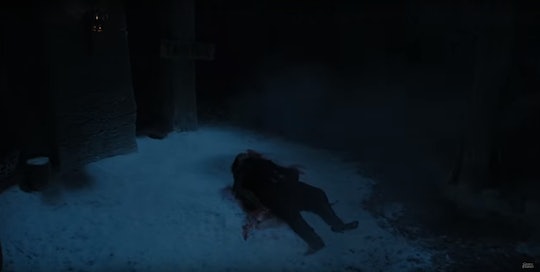 Season 6 of Game of Thrones (also known as the best thing to happen since... ever) premieres on HBO on April 24. (Warning: spoilers for Game of Thrones Season 5 ahead.) I don't know what I've been doing since Season 5 ended and Jon Snow laid dead at the hands of the Nights Watch. Maybe I went into hibernation. Or I think I've been in shock. We all have. Jon Snow dead? Not possible! There were so many theories about him, so much buzz on the Internet about who he could possibly be. And now we have this spoiler showing him dead, on the ground.

Snow's death was a terrible blow, even on a show known for killing off all of the best characters with mercenary glee. (Eddard Stark? Robb Stark? Oberyn Martell? Stannis Baratheon?) But Jon Snow, dead? Come on!

Or is he? Resurrection is not unheard of in the world George R.R. Martin created for us, is it? Remember Beric Donderrion? He was brought back to life by Thoros of Myr, a priest for the Lord of Light. So maybe Melisandre, the Red Priestess who serves the Lord of Light, will finally be good for something and bring him back to us. I'm just guessing — and hoping — of course.

Fans also see Jorah "Friend Zone" Mormont looking for Daenerys Stornborn, the coolest chick in the Seven Kingdoms, in my humble opinion. At the end of Season 5, her dragon took her away from a major revolt and dropped her into a field where she was immediately surrounded by men on horseback. In the trailer, it looks as though she is being held captive by the Khalisar, those bloodthirsty, horse-loving savages (for those of you who don't remember, she was once a Khaleesi herself, ruling beside Khal Drogo, RIP).

The Lannisters still look to be battling the deceptively kind looking High Sparrow, who has managed to take over King's Landing with his Faith Militant. Last season Cersei Lannister was humiliated and forced to walk naked through the streets. I have a feeling the tides may turn presently. In the trailer, there is a brief scene with a massive man cloaked in gold armor standing between the Faith Militant and Cersei. They are lead by Lancel Lannister, Cersei's cousin/ex-lover (ok, nobody said she was perfect.)

Lancel Lannister: "Order your man to step aside or there will be violence."

Hot damn, sister! They do not know who they are messing with. It helps that she looks to have her brother Jamie back by her side, saying: "Everything they have taken from us we're going to take back, and more."

If Twitter is any indication, the trailer is doing a good job of whipping fans into a fever pitch of speculation.

So many blink-and-you-missed-it teasers. Did I see a wildling army fighting the Boltons? Could this mean it's Jon Snow, back from the dead, taking out his vengeance on the Bolton army? Will the Starks finally take back Winterfell? Where is Tyrion Lannister? He looks like he has a beard; is that good news or bad? What about Davos Seaworth, the loyal right hand man to the now deceased Stannis Baratheon? I saw him for a moment, what was he doing, guys? What? Brandon Stark is hanging with the Night King? Is this wise, buddy?

Too many questions, not enough seconds in the trailer. Hurry up April 24.