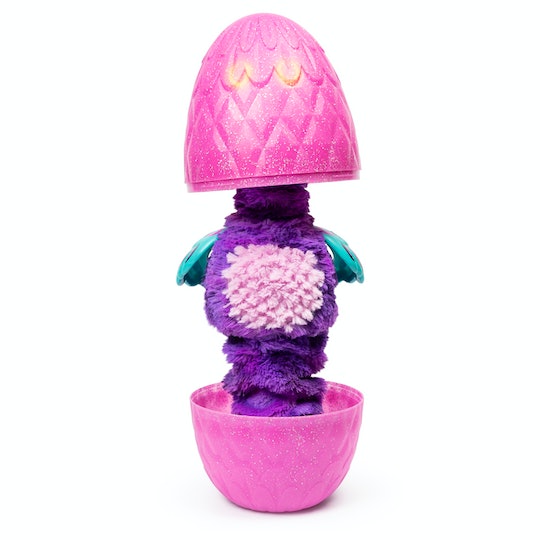 The Giant New Hatchimal Can Be Re-Hatched, & It Hits Target & Walmart Today

The anticipation that accompanies a new Hatchimal is enough to make most adults want to throw all decorum to the wind and crack the darn thing open themselves. After the years of hype, however, parents are no longer strangers to these speckled eggs or their boasts of secret treasures, colorful plushies, and twin stuffed animals. In fact, at this point, it might seem as though you’ve seen everything Hatchimals have to offer. But believe me when I say you’ve never seen a toy like the new Hatchimal Wow from Spin Master.

The very first thing that will wow you is the sheer size of the Hatchimal packaging. I mean, this thing is huge, especially in comparison to its predecessors. It also happens to be covered in bright pink sparkles, making me wonder exactly what kind of kid wouldn’t throw a fit to find out what’s inside. Its packaging alone is temptation enough, but the suspense only continues to grow as you and your child start to imagine what could possibly inhabit such a glamorous egg.

Like all other Hatchimals, the animal inside won’t be revealed until it has been rocked and nurtured appropriately (nurture play is kind of the name of the game here). However, after taking in some feedback from loyal Hatchimal fans, Spin Master has made it so that the Hatchimal Wow will only take five minutes to present itself, as opposed to older versions, which could take up to 25 minutes. As kids play with the egg and try to coax their Hatchimal out of its shell, the animal inside will interact with them by making noise, lighting up, and tapping.

After rocking the egg for a few minutes, the fuschia egg will pop into two halves, releasing a hint of multicolored fur. The smoke will clear, your child will gleefully peel the egg apart, and there it will stand in all its glory: the Llalacorn. In a fantastic, almost ridiculous stroke of genius, Spin Master has put together what may be the most desirable creature to exist within the scope of your child’s imagination. A half llama, half unicorn hybrid, it’s easily the trendiest animal you’ve ever seen, and kids will be surprised to discover whether their specific Llalacorn is pink or purple.

But enough talk — now that you’ve met your Llalacorn, it’s time to see what it can do. In total, it has 250 built-in sounds and interactions for your child to discover. It will grow (up to three feet!) and shrink with your hand movement, sing songs in any pitch you want, repeat your voice back to you, play peek-a-boo, and even act like a chicken. The Llalacorn can also interact with the things around it, such as its glittery strawberry “food” which it will chase after, and its shell, which can be placed on top of its head to turn it into a nightlight of sorts. The Llalacorn’s colorful, light-up eyes are also indicative of its mood, and kids can discover all 10 of its emotions as they play.

The Hatchimal Wow, which retails at $79.99, is available now at Walmart and Target stores, or you can preorder it on Amazon for October shipping.

Perhaps the coolest thing about this Hatchimal though is that it's the first re-hatchable Hatchimal, which makes it more long lasting than any other Hatchimal of the past. This also means you don't have to worry about it ending up forgotten under the bed after a few hours. After all, it’s essentially (and unapologetically) the toy straight out of your childhood dreams. Trust me, it’s been worth the wait.

More Like This
The Bath & Body Works Candle Day Sale Is Here & It's *Good*
These Holiday Squishmallows Are So Elfin Adorable
20 Stocking Stuffers For Kids Under $20
101 Advent Calendar Activities, From Books To Read To Cookies To Bake