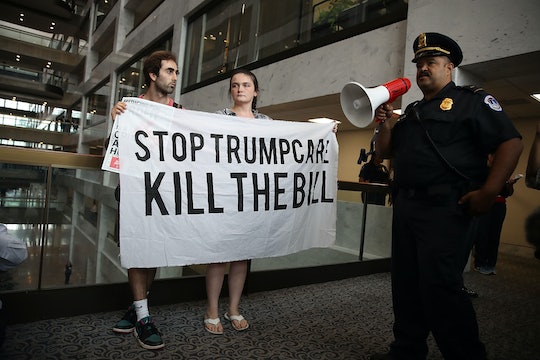 The New CBO Score Is Much Worse Than Expected

On Monday night, when Senate Majority Leader Mitch McConnell announced that he did not have enough votes to pass the Senate health care bill, many people exhaled a sigh of relief. But the fight is far from over, as senators have vowed to repeal and replace the Affordable Care Act, or Obamacare, by next week anyway. The newest version of Trumpcare, which would repeal parts of Obamacare without a replacement, might be the scariest version of the health care bill, and the new CBO score is much worse than everyone thought — proving this plan isn't nearly as beneficial as some might have you think.

The new score, put together by the non-partisan Congressional Budget Office estimates perhaps the worst figures to come out of the repeal yet. The CBO estimates that by next year, the number of people who are uninsured would be approximately 17 million. And in over a decade, more than 32 million people would be without insurance under Senate's current proposed plan.

The current iteration of the Senate health care bill slashes Medicaid, defunds Planned Parenthood for a year, permits insurance companies to sell less-than-comprehensive plans, and will dismantle large parts of Obamacare that are vital for so many people in the nation. In other words, the bill really doesn't benefit anybody (maybe other than the people who want to see it passed).

In addition to millions of people losing their insurance, the cost of insurance will skyrocket for those who still have it. The CBO estimates that average premiums for individual policies purchased through the insurance marketplace or directly from insurers would increase by roughly 25 percent within the year. Those same insurance premiums, under the proposed law, could double by 2020. This seems to go against Trump, who has stated time and time again that insurance premiums are way too high and has promised to slash them.

The CBO also estimates, according to Politico, that insurers would flee the insurance markets in response to the bill's passing, leaving half of the nation's population without individual market coverage options (insurance plans they can't get through their job) by 2020.

As previously stated, in spite of all of the revisions the health care bill has received, the CBO's findings on Wednesday are much more dire than the findings from the CBO's last report. In June, the CBO estimated that Senate's last health care bill revision, the Better Care Reconciliation Act, would have left some 22 million people uninsured by 2026.

Despite not having the support, the legislation to repeal certain parts of Obamacare could be voted on by early next week, according to USA Today, although it is unlikely that the bill will pass. With the lack of support the bill has, combined with these estimates from the CBO, it is unclear why anyone would want to support Senate's health care bill.