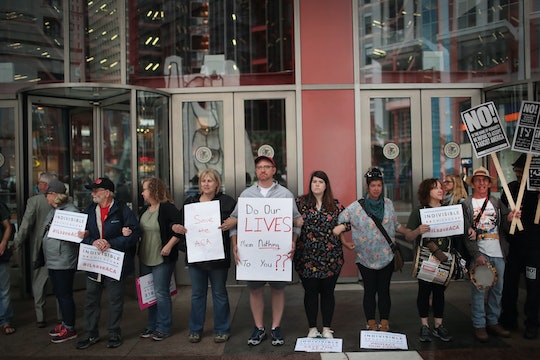 What You Need To Know About The Senate Health Care Bill

Republican leadership's latest proposal to unravel and replace the Affordable Care Act (ACA) is here, and all eyes are on the senators who have the power to either sink it or help vote it into law. While Senate Majority Leader Mitch McConnell feverishly courts votes by attempting to appease both the ultraconservatives and moderates whose support the bill desperately needs, progressives out to preserve the ACA and its programs are parsing the details to highlight how the possible passage of the measure could devastate all kinds of Americans, from the poor to those with pre-existing medical conditions. And there are plenty of facts about the new Senate health care bill that every mom should know as well.

McConnell and his ilk had hoped to at least start the process of moving toward a vote on the bill this week. He postponed the effort, though, after news broke that Arizona Republican Sen. John McCain needed time to recover after a surgery to remove a blood clot. The bill will not pass unless at least 50 senators support it, and Vice President Mike Pence casts a tie-breaking vote in its favor. None of the Senate's 48 Democrats are expected to back it, and two of the 52 Republicans have already announced their opposition. As many as 10 others are reportedly on the fence — including McCain — but at this point the bill absolutely cannot pass without a "yes" from him.

As a result, this delay gives everyone the chance to learn all they can about the bill. Moms, start here.

The Senate tweaked the newer version of the bill after its members could not agree on a compromise on which to vote last month, but one of its most striking and potentially devastating aspects endured: the deep cut to Medicaid funding. The implementation of this plan would result in a nearly $800 billion blow to funding for the health care program for the poor through 2026.

CBS News reported that this would have a huge effect on the nation's children in so many areas of their lives, as about 37 million of them currently benefit from Medicaid programs. The drastic cut would threaten the program that provides them with screenings, immunizations, lab tests, lead level testing, mental health screening, and vision, dental, hearing and substance abuse services; whittle away at aid for disabled children; and result in far fewer being eligible for coverage under the safety net program in general.

It Could Guarantee Higher Premiums For Some

One of the most notable additions to the new version of the Senate health care bill is the so-called Consumer Freedom Amendment, put forth by Sen. Ted Cruz, a Texas Republican. The amendment would permit insurers to sell plans that do not meet the criteria for comprehensive coverage that's currently mandated by the ACA.

On Friday, two influential health insurers, America’s Health Insurance Plans and the Blue Cross Blue Shield Association, sent a letter to the Senate explaining the problem with that type of deregulated setup, according to Vox:

As healthy people move to the less-regulated plans, those with significant medical needs will have no choice but to stay in the comprehensive plans, and premiums will skyrocket for people with preexisting conditions. ... Finally, this provision will lead to far fewer, if any, coverage options for consumers who purchase their plan in the individual market. As a result, millions of more individuals will become uninsured.

In short, segmenting the market puts people who need health care most at a real disadvantage when it comes to accessing it. The resulting higher premiums could pose a huge financial challenge for families who have a kid with a chronic illness or special needs — and for people with a whole host of other problems.

If the above scenario occurs, pregnant women, for example, could end up paying astronomical sums to get the care they need, because maternity services would very likely no longer be standard. This was an issue when similar proposals cropped up under the House versions of the bill as well as the previous Senate one, called the Better Care Reconciliation Act (BCRA). (The new version retains this provision that would dismantle the ACA's protections for people with pre-existing conditions). Weakening the ACA's standards for health insurance plans would have upped the cost for a completed pregnancy by 425 percent to $17,060, according to the Center for American Progress. And that was if there were zero complications, or only minor ones.

It Goes After Planned Parenthood

Republicans don't exactly make a secret of the fact that they want to shut down Planned Parenthood, because the organization has made clear that it will not stop providing abortion services under any circumstances. So it's no surprise that the new bill seeks to forbid Medicaid patients from using that funding to cover their visits to Planned Parenthood for a year, according to USA Today. This ensures that these Medicaid recipients will have a harder time accessing abortions. They also won't be able to take advantage of the other services it provides, such as contraception and testing for and treatment of sexually transmitted diseases.

It's simply an attempt to divert any federal funds from going to Planned Parenthood, but it would have real and detrimental affects for women's health by infringing on their ability to access appropriate and necessary reproductive health care.

Just like so many Americans, politicians are analyzing this bill to decide whether it would improve the health care landscape in this country or make it worse. Americans need to tell their elected officials exactly how they feel about these questions, because how they vote will literally affect all of our lives.