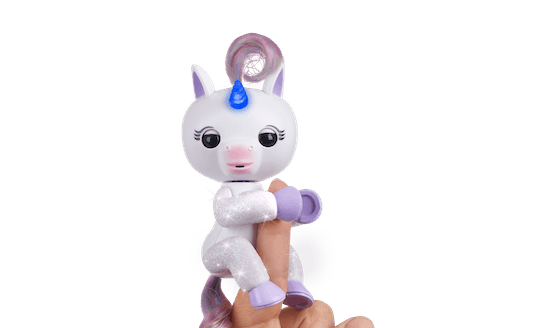 After spending the holiday season desperately seeking sold out Fingerlings, you might have expected the frenzy over these bestselling toys to have died down by now, but nope! With brand new Fingerlings coming out every few months, it your kid's obsession just keeps on growing (right along with your collection of the cute animatronic critters). And now, in honor of Amazon Prime Day, there's another character to covet: Mackenzie is the first Fingerlings Light Up Unicorn, and she's just as irresistible as you would expect.

Mackenzie is making her debut as part of the Prime Day launch, which will give Amazon Prime members the privilege of being the first to purchase new, exclusive, and special-edition products from hundreds of brands for a limited time. But kids won't care about any of that, of course. For kids, Mackenzie's appeal is pretty basic: She's a cute little unicorn (arguably the most popular mythical creature of the moment) who glows "from horn to hoof," with a special horn that lights up and flashes a variety of colors. She loves grabbing onto fingers with her arms and legs, naturally (which get extra points for being glittery) and she responds to motion, touch, and noises with unicorn-specific sounds. Her head turns and her eyes blink, giving different reactions depending on whether you pet her, hold her upside down, or rock her to sleep, and if you blow her a kiss she'll blow one back. How sweet is that?

If Mackenzie looks familiar, that's because she looks quite a bit like Gigi, another unicorn Fingerling:

Like Mackenzie, Gigi ($14, Amazon) has a super cute rainbow mane and tail that kids can brush and style, and she can blink her eyes and turn her head and respond to touch and sound in the same ways. But Gigi is lacking one very special talent that Mackenzie brings to the table: Gigi can't light up. (And she's not sparkly, either.) A unicorn with no sparkle?! Mackenzie is totally gonna give Gigi an inferiority complex when she moves into your playroom.

Mackenzie will be available on Amazon Prime Day, which starts at 3 pm on July 16 and lasts for 36 hours, to Prime members only for $18. If you're not a Prime member, you'll have to wait until after September 1. But if you can't wait one more minute to order an exclusive new toy, there's another new Fingerling set introduced as part of the Prime Day launch that's available right now (for Prime members only): Jess & Eden are part of the Fingerlings Baby Monkey & Mini BFFs line ($15, Amazon), and they're just as darling as the rest of the family. Green and purple, they do all the usual Fingerling things (hold on to your finger, blow kisses, "talk").

Aren't they sweet? If Amazon's goal is to get more people to sign up for Prime (which I think we can safely assume it is), then dangling exclusive Fingerlings as a carrot is bound to be an effective strategy. After all, there's no pressure greater to put on a parent than that of a small child with a passion for collectible toys. Especially knowing that Fingerlings can be counted on to keep on introducing more and more toys that your kid will inevitably want that will likely be Amazon exclusives, too.

What's next? From monkeys to dragons to dinosaurs to baby sloths, there's already a substantial menagerie of choices; there are even Fingerlings Minis available in all the aforementioned varieties (including unicorns). The Minis don't move or blink or light up, but they're only three bucks and they're fun to put on top of a pencil or even hang from a bracelet.

Someday, perhaps, we'll all look back at Fingerlings the same way we remember Beanie Babies and Cabbage Patch Kids (as in, we'll be checking to see how much they're worth on eBay). But for now, this trend is showing no signs of fading... so gear up from Prime Day now!

Editor's note: This piece has been updated from an earlier version to clarify the date of availability for non-prime members.