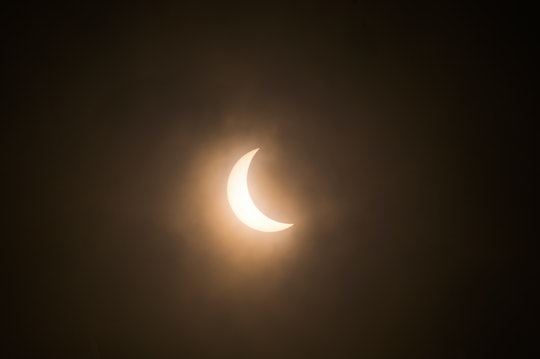 The Next Partial Solar Eclipse Is Coming, But Don't Clear Your Calendar

This summer, it seems like every other week there's some other major celestial event happening: Either yet another planet is going into retrograde or everybody's freaking out over the prospect of another eclipse, making special sunglasses to watch the spectacle or stressing over the potential personal implications from an astrological standpoint. Like right now, you might be trying to figure out how to watch the partial solar eclipse on August 11. But as you've no doubt learned from the other eclipses this year, it's not always as easy as going outside and looking up.

On August 11, 2018 a partial solar eclipse will become the third of three eclipses in one lunar month, as EarthSky explained. (A lunar month is the period of time between successive new moons, which lasts approximately 29.5 days).

When a solar eclipse happens, it always occurs within about two weeks of a lunar eclipse; during an eclipse season, there are usually two eclipses (one solar and one lunar). So it's kind of a big deal that there are three eclipses happening this season — in fact, the last time a total lunar eclipse and two partial solar eclipses occurred in a lunar month was back in 2011, and it won't happen again until 2029.

Considering you won't get another chance to observe the third in a series of eclipses again for over 10 years, you probably want to make sure you're watching from the most perfect vantage point possible. Unfortunately, the bad news is, you probably won't be able to see it at all... or at least not if you live in the U.S., anyway.

"The eclipse will start out over the North Atlantic Ocean and Greenland, moving north and east so that the shadow simultaneously moves toward Iceland, northern Europe and the northern polar regions," according to Space.com.

"Continuing its path over the top of the planet, the shadow will be wide enough to cover most of northern Russia from east to west. It will then dip down into Mongolia, China and surrounding areas."

Quite a trajectory, but sadly not a route that includes this part of North America. If you feel like taking a trip to Alert in the Nunavut region of Canada (the northernmost permanently inhabited place in the world), you can start watching the eclipse at 4:24 a.m., local time. Happen to have a business trip scheduled in Helsinki? Sleep in a little later and look up starting at 11: 51 a.m. (again, local time). Meanwhile, the action won't be visible in Beijing until 6:13 p.m., but at least it will be visible eventually!

Okay, so you probably won't book a vacation for the sole purpose of catching an eclipse. Seriously though, if you're not going to be in the U.S. on the 11th, check out the interactive eclipse map at TimeAndDate, where you can input your exact location and find out if you'll be able to see the eclipse from where you are:

Sigh. No eclipse for me, or millions of others. And that's not even the only thing that won't be visible on the 11th: You won't see the moon at all. As Space.com also reported, solar eclipses can happen only during a new moon, but new moons are always dark because no sunlight reflects off the moon's surface.

So it's a bit of a frustrating eclipse overall, but hopefully, some sky-watching types in Beijing and elsewhere will be uploading amateur footage on to YouTube later on in the weekend. And at least you won't need special protective glasses to watch!