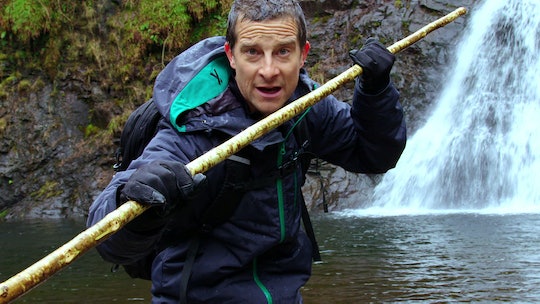 Netflix is diving into the world of interactive content, and I can't say that I'm not impressed. Following the massive success of Black Mirror: Bandersnatch, where viewers chose their own path within a scripted series, the streaming giant released You vs. Wild, an interactive series where the viewer helps Man vs. Wild star, Bear Grylls, survive in harsh environments throughout the world. Also new to Netflix is the offbeat family sitcom No Good Nick starring Sean Astin and Melissa Joan Hart. So when the No Good Nick cast watched You vs. Wild it was, dare I say it, even more charming than good be expected.

Although you might question why Netflix put You vs. Wild and No Good Nick together in a promotional video, you should know that both have a dangerous but kind-of-goofy feel to them. No Good Nick tells the story of a family turned upside down when a girl named Nick arrives at their house claiming she's a distant relative. However, she is actually seeking revenge on them for allegedly — and unknowingly — ruining her life. Meanwhile, You vs. Wild is an interactive reality show — ? — that lets viewers take control of risky situations. But, the series will still leave you with a few laughs.

In the clip, the cast of No Good Nick, including Siena Agudong (Nick), Lauren Lindsey Donzis (Molly), Kalama Epstein (Jeremy), Astin (Ed), and Hart (Liz), play You vs. Wild. Or as Astin describes it, "If you're not tough enough to go on the adventure yourself, sit on your couch and you can do it now on Netflix." Thanks, Sean. I truly feel seen.

The No Good Nick crew sets off on their adventure by playing the first episode, "Operation Jungle Rescue, Part One," in which they must find and rescue a doctor who went missing while delivering a malaria vaccine. Filled with a string of dad jokes, courtesy of Astin, and sometimes questionably dodgy decision making, including the choice to eat a giant grub bug that still makes my stomach churn, the No Good Nick cast managed to come out at the end of the episode unscathed.

"I definitely learned some survival skills," Hart joked in the clip. "Like trying to sneak past a crocodile is probably not the best choice."

While Hart was joking, it's possible that you could learn a thing or two from You vs. Wild. However, you should probably know that the scenarios were largely created by producers. It is a reality show that has multiple routes planned out. And no, you can't actually kill Grylls in You vs. Wild by making the wrong choice.

In an interview with Vulture, producer Rob Buchta, revealed that the interactive format of the show made the crew look at both scripted and improvisation to make You vs. Wild work. Buchta said:

Basically we’d be like, 'All right, Bear, you’ve got to get across this river. What are two ways you could do that?' And he’d be like, 'I could try to swing across on this vine, or I could try to balance on the log and get across.' He’d know in his mind which was the better bet, the safer bet, but we’d let the viewer play with him a little bit, almost like he was their action figure. He’d do both, and then once he would do one, we had a change of clothes if he needed for continuity. We were straddling the unscripted and scripted worlds in a way I’ve never done before.

I'll admit that watching the No Good Nick cast play an episode of You Vs. Wild made me want to do it, too. And with multiple outcomes, what you see in the clip may not be what you get when you run through it on your own. So happy exploring and try not to get yourself — or Grylls —killed.

You Vs. Wild and No Good Nick are now streaming on Netflix.