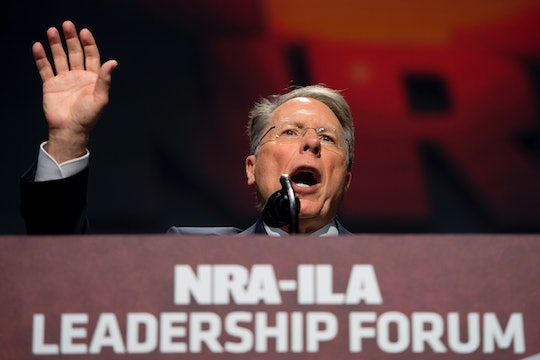 Last Sunday, a frightfully organized lone gunman opened fire on a crowd of 22,000 people at the Route 91 Harvest Festival in Las Vegas. In his room on the 32nd floor of the Mandalay Bay hotel, he had 23 guns, some of which were outfitted with bump stocks (devices which allow semi-automatic weapons the capability to mimic the gunfire of automatic weapons). He killed 58 people and injured 527 before being discovered, killing himself before police could apprehend him. In the wake of the worst mass shooting in modern United States history, the NRA CEO's response to the Las Vegas shooting was defiant, belligerent, and utterly tone deaf.

Romper has reached out to the NRA and is awaiting a reply.

NRA CEO Wayne LaPierre, normally a man who keeps a low profile, offered a rare interview with Fox News on Thursday. While he did call the Las Vegas shooting an "unimaginable tragedy" during his interview, LaPierre insisted that stricter gun laws would not change mass shootings:

If legislation worked, Boston massacre wouldn’t have worked, San Bernardino where California has every gun law on the books, that wouldn’t have happened.

LaPierre went on to quickly accuse the "other side" of the tragedy; notably Democrats and celebrities who have been vehemently calling for gun control legislation. The NRA CEO lashed out and accused them of trying to politicize a tragedy, and attempting “to piggyback their whole agenda to ban guns, restrict law abiding people for the last 20 years, this circus, on the back of this tragedy.”

The CEO became especially agitated when discussing what he believes to be the double standard coming out of Hollywood:

We spend millions of dollars every year, teaching people safety and responsibility, and this Hollywood crowd makes billions teaching gun irresponsibility to the American public. The hypocrisy is beyond belief.

Of course, LaPierre doesn't have actual facts to back up those claims, and it's important to remember that he is talking about fictional depictions in action movies. When LaPierre accused those unnamed "Hollywood elites" of "protecting themselves with guns," while supposedly wanting to get rid of guns, he has clearly forgotten that few people who have weighed in on stricter gun control have not called for an outright ban of firearms, according to Salon. His interview with Fox News' Sean Hannity was terribly off the mark, focused on Hollywood, rather than the "unimaginable tragedy" he referenced at first and then appeared to quickly forget. Movies in Hollywood do depict deaths, but not actual deaths caused by real guns.

Here are a few real-life statistics about gun use in America:

However badly LaPierre would like to shift the focus from the Las Vegas shooting victims to his personal vendetta against Hollywood action films, it can't happen. The reality is, the families of those victims need a real, informed, empathetic response to the mass shooting. Not a distraction.

Because they are real people who lost real loved ones at the hands of a man with real guns.

This isn't a movie. It's real life.