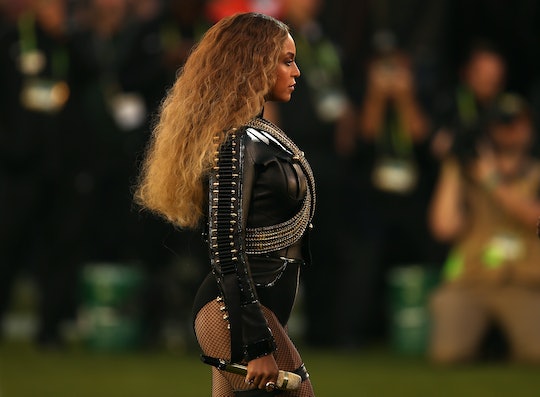 Beyoncé Nation (is that a thing?) is getting very close to losing their collective minds. The singer released a new single, "Formation," back in February, and she's starting a tour in early April, but there's still no word on the new album, which is rumored to be coming out in April. Is there even an album? What's it called? When will it drop? Is she going to force everyone to subscribe to TIDAL if they want to listen to it? One fan has taken matters into his own hands and has used numerology to predict Beyoncé's new album's release date. Seems reasonable.

Twitter user Anthony predicted that the nameless album will drop on April 4, 2016. Why, you ask? Because Beyoncé is basically obsessed with the number four. Not only is April 4 her wedding anniversary (her eighth anniversary – oh, snap, eight is divisible by four!), but she was born on Sept. 4, and her husband, Jay Z, was born on Dec. 4. And Anthony didn't even mention the fact that Beyoncé's 2011 album was actually called 4, and the single off of the new album, "Formation," practically has a four in it! Wait, what if the album is called Formation? What if it's called Fourmation?! What if she takes a page from the latest Fantastic Four movie and called it Form4tion?! Ahhh!

So what's going on here? Is there really some magical, mystical connection between Beyoncé and the number four? Is it all a coincidence? Or is it more like that thing where you get a new car, and then it seems like half the cars that you pass are the same model as yours? That is, does the number four only seem to be popping up so often in Beyoncé's life because Anthony was looking for it? I did a little digging to see if I could replicate his results with other numbers.

Beyoncé was born in 1981, a number which contains two ones. It also contains a nine and and eight, and what's nine minus eight? Exactly. Beyoncé was originally in Destiny's Child, but she's now a solo artist. Solo comes from the Latin word "solus," which means "alone," and "alone" comes from the Middle English "all" plus "one." She also has one child, appeared in one Austin Powers movie, and has released only one single from the new album. Proof that her new album will drop on November 11, which is just chock full of ones.

1997 was the year we all learned Beyoncé's name, when the Destiny's Child song "Killing Time" was released on the Men in Black soundtrack. The name Beyoncé contains seven letters, as does Knowles. Her daughter, Blue Ivy was born on January 7, 2012 (January also has seven letters!). Beyoncé has 14.2 million Twitter followers, and 14 divided by two is seven. In July 2014, Beyoncé's "Single Ladies" leotard was inducted into the Rock and Roll Hall of Fame – July is the seventh month and 14 divided by two plus zero equals... drumroll, please... seven. Beyoncé's new album will be released on July 7.

Anthony from Twitter is definitely better at pattern recognition than I am. And if it turns out that Beyoncé is actually interested in numerology (which everyone knows is a favorite pastime of the Illuminati), then he makes a very good case for why her album may, indeed, drop on April 4. Then again, one could also use numerology to make the argument that, since Beyoncé named a song after my birthday, I'm the actual queen, and not her, so, yeah. Results may vary.

More Like This
Disney Drops Strange World Trailer, A New Sci-Fi Movie About A Family Of Explorers
School Is Back In Session! 'Abbott Elementary' Was Officially Renewed For Season 2
'The Proud Family: Louder & Prouder' Is Returning For Season 2 On Disney+
'Workin’ Moms' Season 7 Is Reportedly In The Works! Here’s Everything We Know