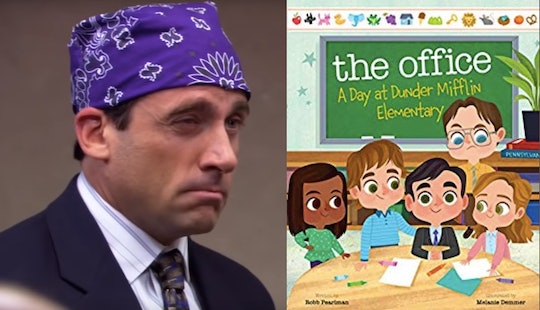 Michael Scott, a man who once coined the username LittleKidLover for his dating profile so everyone would know he was ready to be a dad, would be so thrilled with The Office: A Day at Dunder Mifflin Elementary, an adorable new young reader from Little Brown publishers. Truly, he would be running out ASAP as possible to pick up his own copy.

I know, I see your confusion. An Office chapter book? And indeed, the idea is as oddball and charming as the show. Set in a school, it features wide-eyed illustrations of all of your favorite Dunder Mifflin employees reimagined as children. The story is written for kids in the 4 to 8-year-old range, and centers around an overeager Line Leader named — of course — Michael Scott. Michael is super excited to lead the line that day! The problem, however, is that little Michael has zero idea how to do this.

Fortunately, he has lots of buddies and peers who are there to help and lend advice. Children named Pam, Jim, Dwight, Ryan, Stanley, and Meredith are all there to offer some input. There's even an awkward little kid named Toby.

Described as a sweet little story that offers helpful lessons on knowing how to ask for help, the 40-page book is also apparently loaded with inside references to the show. Which is totally going to make you laugh, and then confuse your child as to why you are laughing. Which shall then lead to a much longer bedtime, as you try to explain why someone would put a stapler inside of Jell-O. Actually, maybe read it on your own first, just to go ahead and get your own giggles out of the way?

I must say, this is a clever move from Little Brown, as Office fans are regularly praying to the TV gods for a reunion of the cast. While a chapter book might not be quite as glorious as seeing John Krasinski pursing his lips for the camera once more, it's still a nice little way to revisit the show, and to introduce your kids to a beloved relic of your past... that they totally aren't going to understand or care about, but that's neither here nor there.

I can imagine The Office: A Day at Dunder Mifflin Elementary being a very popular baby shower present, and it makes me wonder if there are any other plans to turn popular old TV shows into children's books. Think of the possibilities! Carrie Bradshaw's First Day of Kindergarten. Don Draper Goes Potty. Walter White and the No Good Very Bad Day...

The mini-Michael Scott book won't be available until Oct. 6, 2020. Which is indeed a bit of a wait. But you can pre-order a copy today for $18, if it brings you any comfort to know that one day in the distant future, a postal worker will arrive with a small package and jam it into your box. That's what she said!