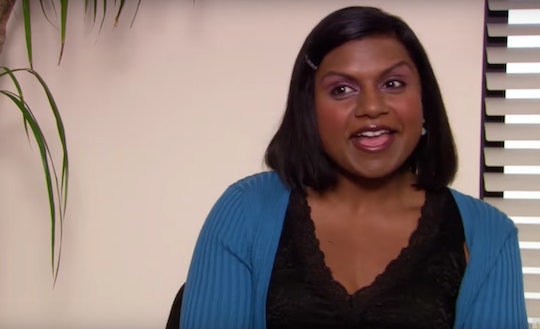 Mindy Kaling just had a baby, and oh man, Kelly Kapoor would be going out of her mind right now if she knew. Kaling, of course, played the babies-and-marriage-obsessed Kapoor on the NBC hit sitcom The Office for seven seasons starting in 2005. Since then, Kaling has accomplished a lot (to put it extremely mildly) but The Office memes about Mindy Kaling's baby circulating in light of the happy news really get to the essence of how pumped fans are for her right now. And, honestly, Kaling's new baby might as well get used to seeing The Office gifs and memes early, because Kaling's role on the show is as much a part of her public identity now as all the other badass career accomplishments she's had (and there have been a lot).

Devoted fans of The Office, which ended after nine seasons in 2013, will remember Kaling's Kelly Kapoor character for her tumultuous relationship with her coworker Ryan Howard. Ryan was played by B.J. Novak, whom Kaling dated for a couple of years starting around the time that The Office first debuted, according to TIME. Now, there are some fans who desperately want Novak to be the father of the baby (Kaling has not publicly revealed the man's identity), but others are content to channel some classic Kelly Kapoor moments to offer their heartfelt congratulations and to make jokes only lovers of The Office would understand.

E! News first reported on Tuesday that Kaling had welcomed her first child, a daughter named Katherine, on Dec. 15. And, oh man, just wait until little Katherine hears about what her mother has been up to lately. In the same week that she welcomed her first child into the world, Kaling appeared on the cover of TIME magazine thanks to her role in the upcoming film A Wrinkle in Time and got her fans all riled up when the first trailer for Ocean's 8, in which she stars alongside the likes of Sandra Bullock and Rihanna, went live.

But for many, Kaling's was a household name long before her latest career accomplishments. And one of her early stepping stones into the stardom she now enjoys was her involvement with The Office, on which she not only acted but also served as a writer, producer, and even, occasionally, director. In fact, she only left The Office before the series' run was over in order to start her own show, The Mindy Project, as Entertainment Weekly reported.

Still, many of the Twitter reactions paid homage to the occasion of her daughter's birth with throwbacks to The Office:

But even though all the current memes and gifs inspired by The Office floating around the Twittersphere absolutely are throwbacks, that may not be the case for much longer. Also in the midst of Kaling's very good week, TVLine reported that NBC is considering reviving the classic sitcom for the 2018-2019 season following the success it saw in bringing back another favorite, Will & Grace. Nothing's for sure, but the report mentions that what would be an epic return to Dunder Mifflin’s Scranton, Pennsylvania, branch would "feature a mix of new and old cast members." So that means there's a chance that Kelly Kapoor could live to see another few episodes, right? Maybe with Katherine in her arms?

That's a bit of a stretch, obviously, but Kaling honestly never ceases to amaze me. And even if she doesn't return to The Office for another season, there's really zero doubt that Kaling will continue to kill it for years to come. Now, she'll get to share all that success with her baby, and that's a beautiful thing.