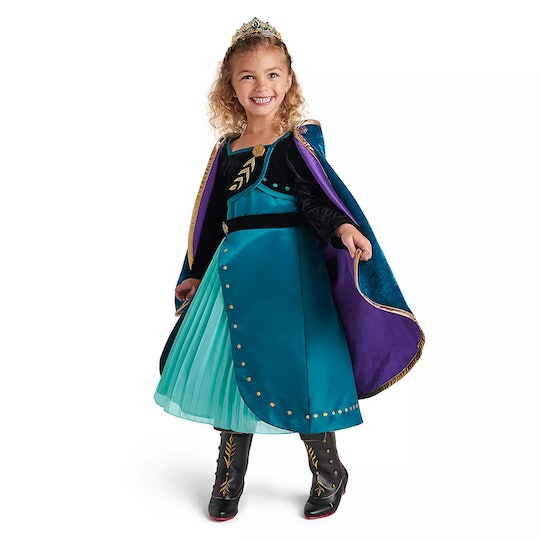 Not sure if you've heard, but a movie called Frozen 2 is out in theaters, and it's kind of a big deal. OK, I know you've heard. Every being on planet earth has heard. Even your dog knows Frozen 2 is in theaters. But... did you know that the Disney Store has unveiled the official new Frozen 2 costumes?

It's funny how much "princess dresses" have changed since I was a kid. When I was little all of these polyester gowns weren't really a thing. My dress-up mainly consisted of wearing my mom's slips, which I realize makes me sound like I'm from the early 1900s. But of course with films like Frozen, the female characters are now actually independent, fully-formed humans. And having fab, detailed costumes available for purchase, too? Well, it's definitely an improvement all around. I mean, I'm pretty sure I would have begged my mother until her ears bled for this Elsa costume.

Look at this thing! It's got slacks! And a cape like gossamer wings! Yes, your kid will kind of look like one of the Golden Girls headed to a wedding, but they totally won't know this. They will simply think they look like a magical queen born with the power of ice and snow!

I would be remiss if I did not point out the awesome Elsa boots one may also purchase, and which your child is totally going to demand to wear to school like a go-go dancer.

But perhaps your little one is more of an Anna? In which case, she is going to lose her mind over this super fancy get-up. The contrasting colors are both gorgeous and — even better — not pink, and the underskirt is made from satin and organza. Plus, it comes with its own full-length velvet cape. Regal!

Of course, no royal member of Arendelle is complete without her crown. The Anna tiara is made from metal, and has little side combs to hold it atop your little one's head. Or your own head, when your child is forcing you to be Anna so she can be Elsa. And which you will likely forget you are wearing when you later go to the door to greet the UPS man.

Yes, there are Anna boots available as well, lest your child be forced to be royalty wearing wellingtons. These are such an upgrade from those old plastic princess high heels with fluff on the toes. Remember those? Or does it sound like I'm talking about slips again?

In short, if you are parenting a Frozen fan and Santa leaves one of these magical outfits under the tree, odds are high you will have an ecstatically happy child on your hands. Of course, you may also be forced to listen to this child bellow that you are sending them "into the great unknooooooown!" when you order them to go upstairs and find their socks. But that is to be expected.