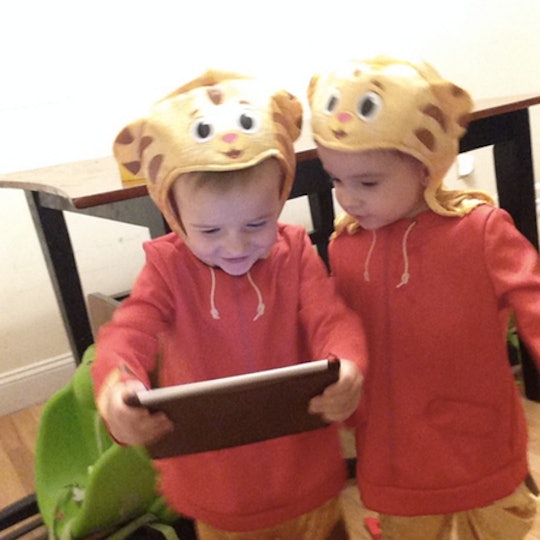 Typically, I'm a huge fan of Daniel Tiger's Neighborhood. My 3-year-old twins have been watching the show since they were old enough to focus on a screen and it quickly became one of their favorites. (Mine, too.) I loved how the cartoon incorporates the classic characters I remembered from Mister Rodger's Neighborhood as a child and also teaches my kids great life lessons and conflict resolution skills through the little songs on the show. Strangers and family often comment on how well my boys are able to express their emotions, and I fully credit Daniel Tiger with making that possible.

But there's one episode of Daniel Tiger that I completely regret letting my kids watch. And if your kids are fans of the show and have seen this episode already, then you probably know exactly which one I'm talking about: Season 6, Episode 2, the one where Daniel can't get what he wants so the grownups tell him to "Stomp three times to help yourself feel better."

I realized my horrible mistake one afternoon when I was fixing a snack for my boys to have after they'd finished their daily episode of Daniel. I was excited because Season 6 had just been released on Amazon Prime, and new episodes meant the boys would be really into their show, which meant time for me to focus on work for a half hour. But as I poured them milk afterwards and handed Remy his cup, he turned his nose up at the green cup I'd handed him. "I want a blue cup," he said. I told him the blue cup was dirty. And usually, when his favorite cup is in the dishwasher, he might tell me that he's frustrated or sad and then he'll take the cup I'm offering. But this time he turned to me and shouted, "That makes me MAD, MAD, MAD!" and stomped his little feet in time to his shouting. I looked around as though there was hidden camera somewhere because surely, this was a joke.

My kid had never, ever had an outburst like that before. Was this the Terrible Threes everyone had warned me about? I chalked it up to him needing a nap, convinced him to take the green cup, and tried not to worry about it. But that night when his brother couldn't reach the puzzle he wanted, again it was the same, "I'm MAD!" and the stomp-y feet routine. This time Lolo let out a "Grrrr" too. Thinking this new behavior might be from an animal book we picked up at the library (and would have to return ASAP), I asked him,"Why are you stomping like that?" When they told me it was from Daniel Tiger, I was shocked. I queued up the episode to see for myself. Sure enough, there was Mom Tiger and Queen Saturday, encouraging their kids (and mine) to throw temper tantrums when things didn't go their way. WTF?

My first thought was: PBS, how could you? Why hast thou forsaken me? For five glorious seasons, this show has done an amazing job of helping kids come up with non-physical ways to handle frustrating emotions and then they resort to telling them to stomp it out. Were the writers hungover the day they wrote this episode? Was the break room out of bagels? What gives?

"But Daniel does it, mom," they told me. I told them Daniel also takes a deep breath when he's frustrated, so could we do that instead? "No," they replied. "This is more fun."

What's ridiculous is that the episode isn't even necessary. They've already had a couple other perfectly good episodes that offered reasonable ways for kids to deal with situations when they're angry or upset. There's "When you're feeling frustrated, take a deep breathe and ask for help," or "When you feel so mad that you want to roar, take a deep breathe and count to four." Both are awesome non-physical alternatives to telling our kids it's OK to throw a temper tantrum when they don't get their way.

Giving kids permission to stomp when they don't get their way is like opening a bag of potato chips: You can't eat just three. No, you're in it for the long haul now, so may as well settle in until the dust settles.

In general, I use the Tiger family to help me solve a lot of parenting problems. "You gotta try new foods 'cause they might taste good!" is how I convinced my kids to let peas stay on their dinner plates, even if they don't actually eat them. And after watching the episode where Daniel and Katerina have to wait for their food to come out at the restaurant, my boys mimic the same game of hiding an object from the table and trying to guess what's missing when we're out to eat and waiting for our food. Lolo even demands that I give him a "fuzzy kiss" every night when I tuck him into bed.

But stomping when you don't get what you want was one Tiger family tradition I don't want my boys picking up on. The next time they started pounding their sneakers on the floor, I tried to explain there were better ways to tell me they were frustrated. "But Daniel does it, mom," they told me. I told them Daniel also takes a deep breath when he's frustrated, so could we do that instead? "No," they replied. "This is more fun." Desperate for help, I called my best friend. Before I could even tell her what episode of Daniel Tiger I was talking about, she knew. "The stomping one?" she said. "The worst. We should protest PBS, except we need them too much."

Relieved that I wasn't the only parent dealing with tantrumming kids but still unsure of how to get my boys to stop throwing a fit whenever they got mad, I was stumped. That is, until I finally came up with a way to make them see that they didn't always have to do everything Daniel Tiger does. "Boys, you like to do everything Daniel Tiger does, right?" I asked them. "Yes!" they shouted. "OK, then if you're going to stomp like Daniel, you have to eat broccoli like Daniel too."

And just like that, we've gone back to telling mommy when we're feeling frustrated instead of stomping.