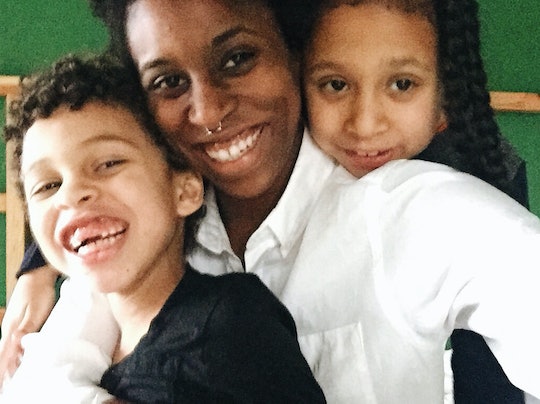 The One Heartbreaking Lesson I Shouldn't Have To Teach My Kids

Every black parent knows that there will come a day when you have to sit across from your child and have a conversation about the world that exists right outside your door. A world your kids perhaps didn't notice before, but after this conversation, they'll see everywhere. You make a choice to consciously remove parts of their innocence in order to place within them the tools they'll need to be wise, to be safe, and to stay alive. Telling black children the truth about being black in America is a survival tactic. Yes, it's a painful thing to experience; to choose words you know will strip your kids of certain privileges they've believed they've had; to have to look them in their eyes — their sweet, youthful eyes — and be blunt about the world before them. You don't have time to beat around the bush, because black children are dying. In order to make it to 13 years old, or 19, or even 21, they have to be alert. They have to be aware. They have to be smart. They have to never, not even for one moment, forget who and where they come from. Because black children do not have that luxury.

We were sitting in a McDonald's when I had my first serious conversation about race with my two children, who are 7 and 6 years old, respectively. It was just after the announcement came that the police officer who murdered Tamir Rice wouldn't be indicted. I couldn't control my tears or the way my heart hurt. When my daughter walked over to sit down, followed by my son, they asked what was wrong. I made a choice right then and there there to do something I knew I couldn't take back. My children would know the realities of being raised black.

I had to tell him that there are people in this world who don't see him and his sister as "just kids." They see them as scary. As harmful. As dangerous. Imagine telling a child that.

I remember constantly glancing over at a white mother with her children and envying how carefree their lives would one day be. Of course, I didn't actually know her, so perhaps I was wrong, but in that moment, I wanted so badly to know what it felt like to not even have half of the thoughts I have cross my mind; to not wonder if my son will be shot and killed for the way he dresses, if my daughter's identity will not be seen as a "trend"; to live comfortably under the promise that we are all equal. The last time I thought that, I was really young. The last time my children thought that, we were sitting in a booth at McDonald's.

When I told my daughter what happened to Tamir Rice, her brown eyes — which are always so expressive and so full of life and wonder — went dark. The fire that usually lights them up disappeared. I watched it, I watched that light go out, and it took the wind out of me. I wanted to reach across the table and grab her and tell her that I would make everything OK for her because that's what she and her brother deserve, but I didn't. I couldn't. The world will not give them what they deserve. So instead I cried. I said, "this is why you don't get to pretend to play with guns, because you might intimidate someone, and that intimidation will cause you to potentially be harmed." My son, who's 6, said, "but we're just kids," which only produced more crying from me. I had to tell him that there are people in this world who don't see him and his sister as "just kids." They see them as scary. As harmful. As dangerous. Imagine telling a child that. They walked away from the table different people. Their world was now different. They were now changed. And it shattered my heart to pieces.

It's impossible to put into words what it feels like to watch innocence — already so fleeting — abandon a child. It's devastating.

We talk about race often at home. It's impossible not to. My children are biracial. Their dad is white, and my current partner is also white. I am black. At home, our conversations have been lighter. They're more about the observations my kids make about our differences, and we make it a point to celebrate those differences. Back then it was about teaching my kids to appreciate their brown skin and their curly hair. I thought that maybe, maybe, when they were older we'd really dive into the realities of what being black in America is like. And I was hoping that by then, our country would look different. But Tamir Rice's death changed everything for me as a mother.

I described the way they were followed by a truck full of white men, who shouted slurs and taunted them.

After the prosecutor announced there'd be no charges brought against the officer who murdered Tamir Rice while he was playing in a park, I realized I couldn't ignore the race conversation. Then when Black History Month rolled around, I offhandedly asked if they would be reading any books or doing any projects at school in honor of it, and both kids told me they weren't. So I went on Amazon and bought them 30 books by black authors, highlighting so many different aspects of African American history. We read about the '60s, of course, but we read about everything before and after that, too.

We read a book about Birmingham and Martin Luther King, Jr.'s time there. They definitely had a lot of questions, and it gave us an opportunity to talk about what it was like for their grandparents to grow up in Texas and Chicago during the '50s and '60s. I told them a story about when my dad was 6, and his brother was 4, were walking down a dirt road in rural Texas. I described the way they were followed by a truck full of white men, who shouted slurs and taunted them, who threatened to kill my dad and my uncle. When my dad tells this story, which isn't often, he says that, to this day, he doesn't know how they remained safe of how they got away. As I told my kids a story about their grandpa — someone who faced the same reality they now do — I watched them age a little more. Riley, my daughter, didn't speak for a good 15 minutes afterward. She could only look out the window. I remember looking at her the way I did when she was a baby. She smiled about everything back then, and almost never cried. Exploring as a newly minted 7 year old brings her so much joy, as do meeting new people and making new memories. It's impossible to put into words what it feels like to watch innocence — already so fleeting — abandon a child. It's devastating.

I never, ever thought that I'd turn on my TV and watch videos of our black sons and daughters murdered and attacked. I never thought I'd find myself sitting across from my small children at a McDonald's teaching them how to stay alive. But here I am. Here we are.

I was sheltered from the realities of being black in America growing up, as much as you can shelter a black child. I always knew that I was Other. I felt it and saw it, but my parents and I never really discussed it. I know they were trying to preserve my innocence and give me a childhood, one they never had. I totally understand this, but I won't make the same choice with my own children. I never got to talk about the greatness of being black with my parents the way I do with my kids. Both of them are so proud of who they are, and in a way I'm jealous that I didn't get to have that pride when I was their age.

After I found out I was pregnant with my daughter, I worried that someday, someone might call her a "n---er." How would I protect her from that? How do you protect anyone from that? I realized that just like me, she'd eventually feel the discomfort — one I know so well — that comes from standing in a room as the only person of color. She'd know how uncomfortable it'd be when someone made a black joke in her presence, or touched her hair or her body without her consent.

Despite the fact that I prepared for the reality that the world would make my son and my daughter work harder and longer for the things they deserved and earned, I never, ever thought that I'd turn on my TV and watch videos of our black sons and daughters murdered and attacked. I never thought I'd find myself sitting across from my small children at a McDonald's teaching them how to stay alive. But here I am. Here we are.

As much as I've told my children the truth, I know it's still too soon to lay out all the realities about being black in America. What will I tell my son when he asks to walk home from school on a cold night that requires a sweatshirt, or a hood, or a jacket? What will I say when he asks to play in the park? How will I teach my daughter to navigate being pulled over by a white police officer? To say no to a man who thinks he has right and privilege to her body? I have already stolen so much from them by telling them the truth about the world they'll soon inherit. I don't want to take everything from them, but I'm afraid someone else will.