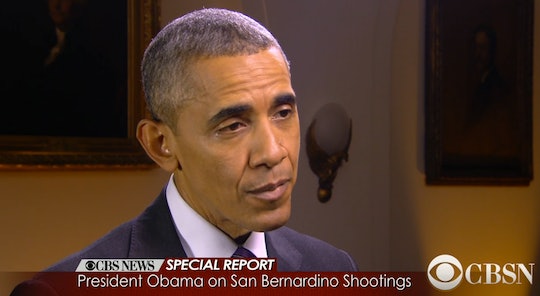 It's become all too common now. A mass shooting occurs in the U.S.; President Barack Obama makes a somber statement about it. And things were no different following Wednesday's shooting at San Bernardino's Inland Regional Center, during which up to three gunmen, one of whom is suspected to be a woman, entered the facility for people with developmental disabilities and shot an as-of-yet unknown number of people. (Update: According to officials, two of the suspected San Bernardino shooters are dead following a shoot-out with police. Authorities identified the suspects killed as Syed Farook and Tashfeen Malik, the female suspect. Upwards of 14 people were killed at the Inland Regional Center, while upwards of 21 people were injured.) Obama's reaction to the Inland Regional Center shootings focused on the gun violence problem that currently plagues the U.S. And one quote in particular from his interview with CBS seems to underscore the entire problem with the shooting.

We have a pattern now of mass shootings in this country that has no parallel anywhere in the world.

It's true — gun violence in the country has gotten out of control, and the stats are staggering. This year, in fact, saw projections that more people would die of guns than car accidents in the U.S. And our inaction in the U.S. is even more shocking, particularly to other countries — Australia and Asia, for two, enacted laws that would curb gun violence, and it indeed did for them. (Said Philip Alpers of University of Sydney's GunPolicy.org, "We don't understand America's need for guns ... It is very puzzling for non-Americans.")

Still, the U.S. has yet to restrict access to guns — even after such shocking and atrocious shootings like Sandy Hook. And that's something Obama is hoping changes. As he also said during the CBS interview:

There are some steps we can take, not to eliminate every one of these mass shootings, but to improve the odds that they don't happen as frequently. Common sense, gun safety laws, stronger background checks ... What we do know is that there are steps we can take to make Americans safer. And that we should come together, in a bipartisan basis at every level of the government, to make these rare as opposed to normal. We should never think that this is something that just happens in the ordinary course of events. Because it doesn't happen with the same frequency in other countries.

Unfortunately, based on the U.S.'s pattern, it doesn't seem as though things will change. But it's easy to be hopeful that perhaps, one day, things will. Here's hoping, however, we don't have to see even more tragedies unfold before that day.