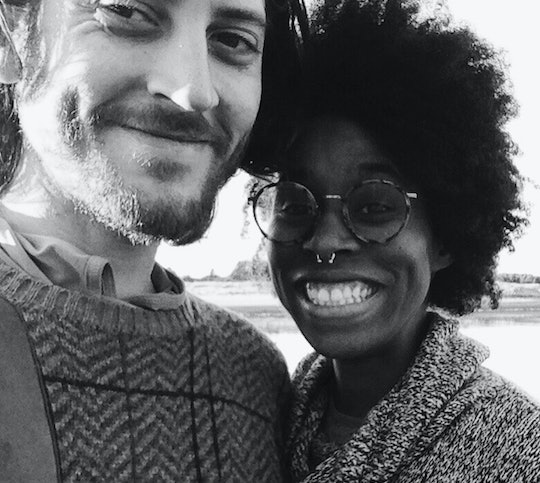 The One Powerful Way Consent Has Changed My Open Relationship

I had never really thought about consent within a relationship until I started dating again after I separated from my husband. When I was married, I never thought, for a moment, that I needed to have a conversation with my husband about consent. I'd just assumed that when people love you they naturally avoid doing anything that could be harmful or damaging. But I later realized this isn’t necessarily how relationships and dating work. Since I'm in a open, polyamorous partnership, consent is incredibly important in my relationship. And it's changed the way I think about consent, because I've learned it's not just something only reserved for partners who are new. Consent matters at every stage of a relationship — especially long-term ones.

I'll admit that I didn't wholly understand consent until I was four years into my marriage. Before I was married, I was sexually assaulted by people whom I'd trusted. Although I was aware at the time that this wasn’t how friendships work, I still was under the impression that because men are men, they just have "no self control," and I needed to carry the responsibility of making sure that I didn't put myself in these "situations" that might "tempt" them. I attribute a lot of that thinking to my upbringing. The idea that these men had forced themselves on me were actually the ones who should have been held responsible for their actions was incredibly foreign to me. I didn't understand that I was the victim; the one who had been disregarded.

But when I left my marriage, I realized that I had been a victim, in more ways than one. Looking back on my marriage, I realized that my ex and I had encouraged unhealthy habits with each other. These habits, I believe, stemmed from my experiences with assault, and I didn't wholly understand the ways my assaults had affected me. If one of us said no to sex, the other would try to coax and convince the other that sex was "what they wanted." Though he never hurt me, I was still horrified and ashamed that I'd behaved like that with someone I loved so much. We had both disregarded and disrespected our ability to say "no," and worst of all, we didn't believe each other when we said it. When my husband and I divorced, I realized how important consent was to me — and how much it would factor in to my future relationships.

Needing and giving consent has given me a lot of power. Power I didn't realize I had. Just by having a say in what happens to my body and with my body, it helps me set better boundaries. It helps me respect myself, and therefore also respect the people around me, and I'm not just talking about in the bedroom.

I’ve been with my current partner for two years now, and just like it was at the beginning of our relationship, instead of making assumptions about what the other is OK with, we make a significant effort to stop and check each other's comfort level. If we’re tired and aren’t as enthusiastic having about sex, we're clear about the way we feel. We make direct requests about what we want so there's no room for ambiguity, and if we don’t want to make these requests during sex, because we don't want to be pulled out of the mood, we have a conversation about what we're comfortable with beforehand. Of course there are times, in the middle of sex, when we have to stop and to do a check in. I’ve heard people say it's not very “sexy” to stop heavy petting or overly passionate sex to check in with the other person. I don’t disagree with this, but my partner and I do. I am still in the process of trying to unlearn so many of the things I was taught when I was young. And because I've been sexually assaulted, it doesn't bother me to pause sex to ask my partner what he wants, or vice versa.

For me, needing and giving consent has given me a lot of power. Power I didn't realize I had. Just by having a say in what happens to my body and with my body, it helps me set better boundaries. It helps me respect myself, and therefore also respect the people around me, and I'm not just talking about in the bedroom.

There is such security knowing your wishes and desires will be heard and respected; that saying "no" doesn't make you cold, or a b*tch, or a tease. My partner supports my voice; he uplifts it.

From the start of our relationship, my partner has been vigilant about getting my consent when it comes to anything that has to do with my body. He doesn’t believe it's his right to take or do with my body as he pleases. He places a lot of respect and admiration on me. When I say that I don’t want to do something, he doesn’t push me or guilt me. And each time he does this, I feel as if my words gain even more power than the first time I said "no." I feel seen, felt, and heard. I am respected, which, to me, is the ultimate sign of love.

There were times when, before I met my partner, I was dating and I felt expected to always say yes; to be cool with what the other person wanted. There were times when I'd push myself to say "no," but I was met with resistance, or a bit of an argument, and I constantly had to remind myself that this isn't how relationships should be. And even though it took me a bit of time to truly grasp this concept, every day with my new partner has only affirmed it for me. There is such security knowing your wishes and desires will be heard and respected; that saying "no" doesn't make you cold, or a b*tch, or a tease. My partner supports my voice; he uplifts it.

Having a relationship that has consent as one of its cornerstones has encouraged me to examine how my friendships outside of my relationship function. It's changed so much about my life. Now, when I talk with friends, I leave room for their "nos" and I ask their permission more fully. With my children, I also leave room for them to say no. I want my kids to learn about consent, so I've been encouraging them to share their true feelings about giving hugs to friends and family. I let them know it's OK for them to be uncomfortable and to vocalize this. I remind them saying no gives them power.

In the past two years, consent has helped give me my freedom. I used to believe that "boundaries" would actually restrict you in a relationship, but I've learned that boundaries are powerful tools for a person. I believe they've helped me create equality within a relationship, as well as respect. Knowing that, no matter what, nothing will be taken from me without my permission makes me proud.