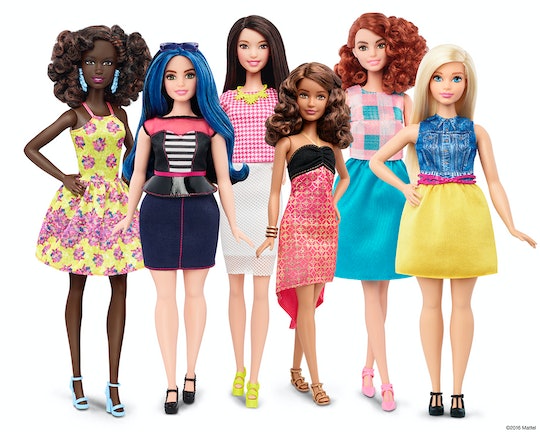 The One Problem With The New "Body Positive" Barbies

On Thursday, Mattel announced a brand new line of Barbies, called Fashionistas, that featured different body types and a wider variety of skin tones, as well as more eye colors and some cute hairstyles. The news made a big splash all over social media and even got the cover story in Time magazine with a cover that read, “Now can we stop talking about my body?” I found myself getting more and more angry the more I read about it. Sure, the dolls are more diverse than previous Barbie products, and they do look really, really, good, but the new Barbie isn’t nearly enough. Let me be absolutely crystal clear here: We are not talking about all Barbies now being available in different body types, we are talking about one isolated product line wherein the jobs of the women are to be “fashionistas,” and then it’s back to business as usual.

Barbie is telling little girls 'you can be anything,' but apparently you can be curvy OR the president of the United States. You can't be both, that would be outrageous. So rather than challenging stereotypes about fat women, they’re choosing to reinforce what we already hear about ourselves constantly.

Now, I’m a fairly crunchy mama, so you might be shaking your head at me and thinking this is all just a part of my hatred for everything fun. You might think that I’m angry with the new Barbie because I want all of our children to play with Montessori-approved beige wooden blocks for the rest of their lives. As it happens, I freaking love Barbie, and actually all things small. I grew up playing with Barbies and My Little Ponies, and I watched the companies that made them extremely carefully. So when I saw Mattel release a new line of Barbies, I brought that childhood love with me in my analysis — and all I felt was complete and utter disappointment. Barbie’s new release could have been so much more meaningful, but instead it’s just one line with a grand total of seven dolls who are all slightly wider than the original.

The first thing that I noticed about the new Barbie line was that it's just that: one new line. And just as the Malibu Barbie line didn't make all Barbies thereafter beachy, there's no indication whatsoever that Mattel has any plans to integrate any of these new body shapes into future Barbie lines. In fact, when I went digging through the new website, I found just the opposite to be true. Other upcoming lines, like "President and Vice President," feature a return to the old Barbie form.

Barbie is telling little girls "you can be anything," but apparently you can be curvy OR the president of the United States. You can't be both, that would be outrageous. So rather than challenging stereotypes about fat women, they’re choosing to reinforce what we already hear about ourselves constantly. Once I became a fat woman, I realized pretty quickly that fat is seen as a character trait. Once you’re The Fat Girl, that’s your whole schtick. Where’s the fat doctor Barbie? The fat gymnast Barbie? The fat Barbie with a kick-ass job? The fact that this is one isolated line tells me we’re probably not going to see dolls like that, and that's a shame.

Rather than applaud Barbie for doing something that's so obviously in tune with the women and girls they're creating these products for, we should ask them: What took you so long?

When the complaint is that your product is not diverse enough, you should actually make your product more diverse by ensuring that visibility and inclusivity are heard and seen in every line of the development process. What you should not do is create one token diversity line in an attempt to distract people from the fact that you’re going to keep on with business as usual.

According to that Time article, at least part of the reason behind this new line is an attempt to win over more Millennial moms, and I think that shows in the product. We’re now seeing Barbies that look like they could be friends of mine, Barbies with blue hair and Barbies with undercuts. But rather than applaud Barbie for doing something that's so obviously in tune with the women and girls they're creating these products for, we should ask them: What took you so long?

The curvy Barbie doll caters to a very specific body type, yet she still has a cinched waist, and as far as I can tell, a flat stomach. She still has twig-like arms. The primary difference seems to be that the curvy doll has wider hips and a bigger butt. No matter what is written and said about her “protruding” stomach, I don’t see it. There are women in this world who are shaped like that, and Curvy Barbie is supposed to be a means to representing the fat women Barbie struggles to reach, but the argument that this curvy doll is a “solution” to the need for a more life-like representation is so ridiculous it’s laughable.

I am a proud fat woman and I can tell you without a moment’s hesitation that Curvy Barbie is not even remotely representative of what most fat women look like. It’s certainly not what I look like. And that's a huge problem because Mattel is trying to sell this as realism. The idea that this one baby step towards larger Barbies is enough for now is infuriating, because there are fat girls who need positive messages now. I worry that when little fat girls play with these dolls, rather than feeling empowered, they’re going to feel like, “Oh my god I’m even fatter than the fat Barbie!” To be honest, I feel a little bit like that, looking at these dolls, and I’m a 30-year-old grown woman who can use cultural analysis to dismantle our fat-shaming culture! How is that going to go for a 7 year old who has no such defenses?

Do the dolls look great? They do. Are the designs totally on point? They are. But the reality is that this is not what inclusivity looks like. Inclusivity would be seeing new body types, hair types, and skin tones across multiple lines of Barbies. Inclusivity would be black Barbie president with natural hair. Inclusivity would be fat Barbies who actually have stomachs and have jobs other than "Fashionista." Until I see at least a nod in that direction, I can’t be excited about the line. So instead I'll keep asking the questions and waiting for Barbie to prove me wrong when it comes to the answers.