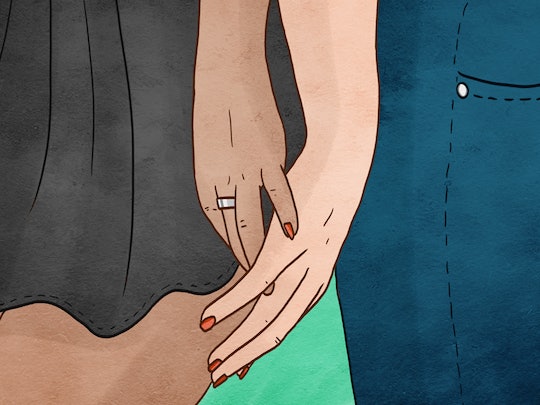 Full disclosure, in the early weeks at home with a newborn, my priorities were as follows:

Regardless of how your baby arrived, and whether or not you were the one who physically gave birth, if bringing your child into your home was anything other than a completely poop-filled circus, you might not be human. Seriously, go and talk to someone because there is a good chance you are some sort of robot species, because that shit is crazy. It's living day-to-day for months at a time, barely meeting needs and just getting by. It's diapers and latches and swaddles and jammies and baby eczema and spilled milk and lullabies and confusion and tears and other unwelcome, spontaneous bodily fluids.

So, it's probably no surprise to most fellow parents that nowhere on my list of priorities was "sexually seduce partner and/or respond partner's sexual seduction." Having a postpartum sex drive was just not in the cards for me. It wasn't even in the junk drawer where my husband and I keep the cards. It wasn't even in the kitchen where said junk drawer is. And you know what? I realize that some other moms might be able to relate to that, and some other moms will definitely not be able to. And that's OK. I'm not a sex writer by nature (in fact, I'm kinda blushing as I'm typing right now) but I think this is a message worth sharing since it's something almost every new parent encounters.

The thing with new babies, those poop-filled circuses, is that they can be all-consuming. They don't leave you much time for quiet reflection or meditation or chanting or prayer or whatever it is you do to stay in tune with you. And so, if you're feeling weird about any part of parenthood, or your new identity as a mom, or the ridiculous Netflix shows you're binge-watching at 3 a.m. while pumping (shout out, Dance Academy), it can be tricky to get to the source. And if it's sex that's making you feel weird? On top of whatever healing and adjusting we're doing, there are additional stereotypes and stigmas surrounding new moms that we're dealing with, too. We're not supposed to want sex, we're not supposed to be ready for it, our partner is going to be ready way before we are, and they're going to ask for it way more than we can handle. We're going to be too tired, we're only going to want to sleep and catch up on laundry and sleep and do the dishes and sleep. It's exhausting just thinking about all the ways we're supposed to be exhausted by the idea of sex after giving birth.

So, in all your copious amounts of free time that you're surely getting as a new mom (*cough*), I would encourage you to ask yourself the following question when it comes to figuring out how to proceed with our sex life after having a baby:

What do I want?

I get that this might not seem like an exceptionally groundbreaking question, but for the particular experience of being a new mom and contemplating sex after having a kid, this is the most important question to ask, and weirdly, the one you might be least likely to ask. And honestly, that makes sense when you think about it: You might be understandably inclined to consider a hell of a lot of other people — your partner, for one, not to mention society's big, vague expectations of you in general — when it comes to having sex. So many moms (admittedly, myself included at times) are so busy wondering how they are or are not fulfilling their partner's needs and/or society's expectations of them to "bounce back" quickly and resume being a sexually viable woman, that they don't really stop to consider what they truly want.

So, if you're looking for permission to have the sex you want after giving birth, or to decline the sex you don't want, I'm not the person to give it to you. But I am going to encourage you to listen to your gut (or your pelvis, or your heart, or really any of your physical regions that weigh in on your sex life). That's going to be able to tell you infinitely more than I ever could (or any other article you'll find on the Internet).