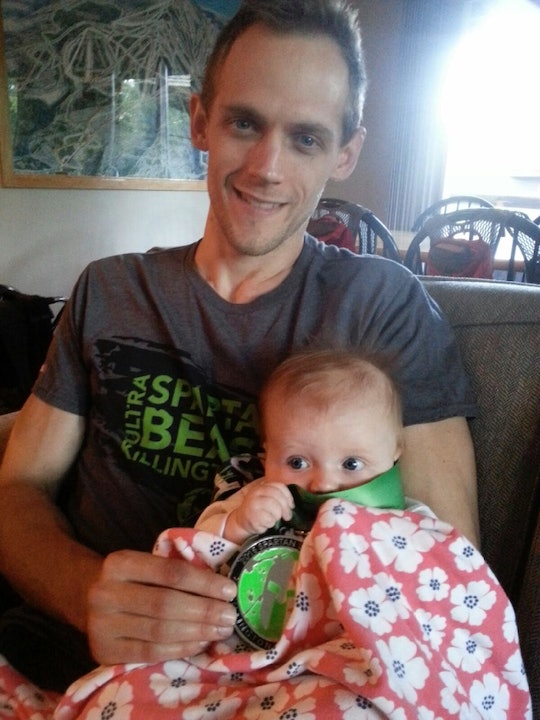 As I write this, my husband is with my daughter giving her a bath before bedtime. Next, he will put her in her PJs, rock her in our rocking chair, and sing her lullabies. Putting her to bed is one of the many things my husband does as her father. He also gets up with her on Sundays while I sleep in until 9 a.m. He plays with her and feeds her and changes her diapers. Sometimes while I play with them. Or I make the food while he shovels it in. Or I pass him the baby powder while he does diaper duty. And sometimes he does all those things while I go shopping with friends, or hit the spa for some relaxation, or go to a coffee shop to work. He does all these things and more and, just so we're clear, when he does them, he is not babysitting. He is parenting. I will never say that my husband "babysits" our daughter because, frankly, it's insulting to him as a parent.

In March 2014, I sat down on the couch beside him and said, "I have to tell you something." I wanted to tell him, to ask him, if he would consider having a baby with me. But I was so nervous that he would say no, that he wasn't ready, that he might never be ready, that I couldn't get the words out. That is until he turned to me and stated, matter of factly, "You want to have a baby." And from that moment, we decided that we were going to be parents. We decided... together. We practiced the art of baby-making (sex, I mean sex), together. He made a conscious decision that day in March to become a parent just like I did. And even though I may have done the whole 37 weeks plus one day of pregnancy and the delivery thing on my own, that doesn't make him a second-class parent. But when my husband is labeled as his daughter's "babysitter," that's exactly what he feels like.

To say that he is her babysitter implies that he is a part-timer, a transient figure in her life, instead of an engaged caregiver. Someone who is in charge for a short period of time but who, in the end, defers to me, the mom, the woman, as the primary parent. When I get home from a movie or a visit with friends, I don't pay him for the hours he's "worked." I don't offer to drive him home if it's late at night. Before I leave for the night I don't quiz him on who he should call first in case of an emergency and I don't question him on how up-to-date his CPR certification is. Because he's a grown-ass man and the father of my child, not the 15-year-old babysitter. To imply otherwise is belittling to us both — and also to his daughter.

When my husband is alone with our daughter, whether it be because I'm working, napping, or having a life outside of being a mom, he's not doing me a favor. There is nothing exceptional, nothing to be applauded, or celebrated about a man doing all the things a mom might do.

And hearing that her daddy is essentially the substitute teacher of parenting would have a two-fold effect on our daughter. Not only would she grow up questioning her father's authority as her parent, but she'd also question what her own role — or her partner's role — might be if she ever decided to become a mom. She would not be an inherently more important parent simply because she is a woman. Neither am I. But to grow up believing that her father "babysits" her while her mother parents is to grow up believing exactly this: that her father isn't necessary or capable.

When my husband is alone with our daughter, whether it be because I'm working, napping, or having a life outside of being a mom, he's not doing me a favor. There is nothing exceptional, nothing to be applauded, or celebrated about a man doing all the things a mom might do so that said mom can get out of the house. He is simply doing exactly what I do whenever he is out of the house. In other words, he's being a parent to our daughter.

However, I will admit that even for someone who feels so strongly about the language used to speak about my partner's role as a parent, even I have had to stop myself from saying "babysit" or thanking him for taking over when I get home. Yes, even the most ardent feminist can be a victim of the harmful gender stereotypes that tell us that men are babysitters and women are not, because they are so woven into the fabric of our lives. But the idea that my husband's only value as a father lies in his ability to relieve me of my duties as a parent rather than sharing them is not only mighty un-feminist of me. It's also probably the most insulting thing I could say to him as a father.

The idea that he babysits our daughter implies that he is incompetent as a parent. As if the existence of a penis precludes him from being able to wipe her butt or dry her tears or feed her or keep her clean or keep the house clean or make her laugh or feel safe. My husband is good at a great many things. He's an amazing athlete, the funniest person I know, and he organizes a pantry better than anyone I've ever met. He's also bad at a lot of stuff. He never remembers the names of characters on television shows, he has horrible taste in sports teams, and I really don't like the way he loads the dishwasher. But when I asked him why the label of babysitter insulted him, this is what he had to say: "It makes me feel inadequate and incompetent at parenting." And the one thing he is not is an incompetent dad. According to him, if some dads are incompetent, it's not because they're men. "Your penis doesn't dictate what type of parent you will be. It's about who you are." And that couldn't be more spot on.