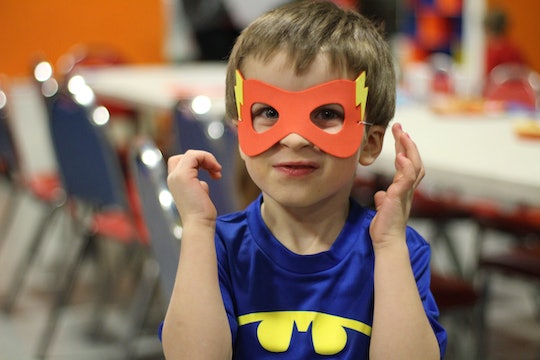 I always worried about the day when I'd have to start talking to my kids about the harder-to-navigate parts of adolescence, like body image and bullying and how to handle failure. I thought, however, that these things were on a distant horizon. My oldest son is just barely 5 years old and in a pre-K classroom where the oldest kids are 6, and I didn't think we'd need to talk to our kids about body positivity and body image this young. Surely they had a few more years of innocence before we have to have difficult and uncomfortable talks about the realities of the world — or maybe not.

There is so much gleaned from peers that some discussions I thought were far off are already here. I've tried to model and teach body positivity to my kids, but some unsettling words have already made their way from the playground to our home life.

A few weeks ago on a trip to visit my parents, my son called my dad "fat." Sometimes he’ll even eat a big lunch and stick his stomach out to show how “fat” he is. He giggles when he says this, and he seems confused when no one at home laughs. Then one night, he took it to a whole new level.

I was horrified. I don’t think the word "ugly" has ever come out of my mouth in front of my kids, and if it has, it was never ever to describe another human being. My son thought it was funny for a second until he saw the look on my face and heard his dad telling him to get in his room using that voice. I scooped up his sister with tears in my eyes. I couldn't believe this was already happening.

I have to talk to my son about body image, and unfortunately I have to start now. I need him to know that his words and actions matter. If he’s going to bring words like “ugly” and “fat” into my house, he is also going to leave them here.

The playground is where all my worst parenting fears are beginning to come alive. Even before kindergarten, my parenting world has been shaken by the things my son brings home from playtime. The nasty words, the dichotomous good and evil play, the threats of physical harm — everything I don’t want my son to know, it all comes out to play at recess when his teachers aren’t watching. I know kids will be kids, and I know no one is to blame for my son's behavior — if he didn't learn these words now, he'd learn them later. If he didn't hear them from peers, he'd hear them from TV, read them in magazines, see them on billboards and ads and movies.

These words mean nothing to him because they do not affect his sense of self-worth, but one day, if he keeps on this track, they'll affect someone else deeply.

In my utopian parenting fantasy, I believed I was going to raise my kids to be body positive by simply modeling it for them. I don’t talk negatively about my body or anyone else’s, and therefore thought that each of my children would grow to love and respect their bodies and the bodies of others based solely on my example. While I still think my role of modeling body positivity for them is important, it’s already becoming clear that this simply won't be enough. I know that the seeds of body-shaming and bullying are not merely planted, they’re starting to bloom. And it's terrifying.

I have to talk to my son about body image, and unfortunately I have to start now. I need him to know that his words and actions matter. If he’s going to bring words like “ugly” and “fat” into my house, he is also going to leave them here. I have to find the right way to help him bury them, with empathy and understanding for his peers — no easy feat for a 5 year old who thinks calling his sister "ugly" is on par with fart-joke humor.

Telling him “no” is not enough. Nor is asking him how it would make him feel. He doesn’t understand the ramifications of these words, the long-lasting sting they can leave when tossed carelessly at the wrong person. If someone called him fat, he'd probably stick out his stomach and laugh. If someone called him ugly, he would probably make a silly face and howl with pleasure. These words mean nothing to him because they do not affect his sense of self-worth, but one day, if he keeps on this track, they'll affect someone else deeply.

So for now we will try to build empathy, try to set rules around words that don’t belong, try to ensure that someone else’s feelings are more important than a punchline. I don’t know if I’ll always say the right thing, but I know I have to say something.

Not everyone’s parents will teach them that their value lies beyond their appearance. Not everyone will have the luxury of unshakeable confidence and body image. In time, my son may even come up against these challenges. Just because the pressure to attain the perfect body image is not as strongly stressed for boys doesn’t mean the pressure isn’t still there. He needs to know that the pressure to look a certain way means nothing, and yet, it means everything.

It means he needs to be kind to himself and to others. It means that words like “fat” and “ugly” have no place in his life; no place in our home. It means that the way he views others should be based on more than the way they look. It means that all bodies are good and worthy and strong and powerful, no matter how they look, no matter who owns them. It means valuing people for who they are, not what they are. It means that not all jokes are funny. There is so much meaning to unpack that it’s daunting, especially at such a young age. So for now we will try to build empathy, try to set rules around words that don’t belong, try to ensure that someone else’s feelings are more important than a punchline. I don’t know if I’ll always say the right thing, but I know I have to say something.

As I raise him and his sister, I want them both to grow up loving their capable bodies and respecting other people's. It is just as important that my son learns about body image, so that he will be more sensitive and aware of the pressures that face his sister. I want him to know how the societal pressures on her are different and greater than his own. I want him to be aware of how much his words and actions matter to her and all other females in his life. I want his example of body positivity to shine, not only for his sake, but for hers as well.

More Like This
14 Recipes For Sick Kids When Everyone's Tired Of Canned Soup & Crackers
Viral Hives In Children: What Doctors Want You To Know
22 Super Sweet Valentine's Day Poems For Kids
35 Children’s Books Starring Black Characters
What Parents Are Talking About — Delivered Straight To Your Inbox