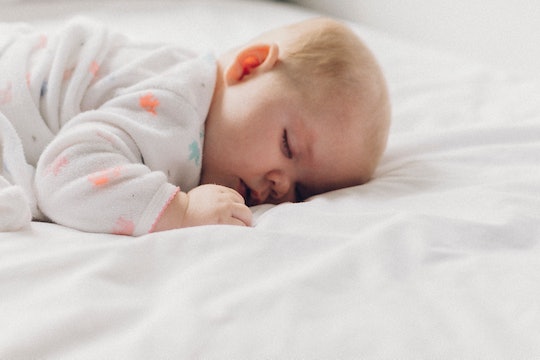 At any given point on my daughter's sleep journey, I have decided in the middle of the night that I need a night light, a white noise machine, a singing mobile, pajamas with faces on the feet for her to look down at. It's Amazon's entire Prime business model: panic at 2 a.m., have it within two days (free shipping!). At around the six-month mark, I was convinced that Scout needed a lovey. My friend in Calgary, Canada, whose child is slightly older, lauded the lovey that let her kid knock out 12 hours of sleep at a time. "It's a miracle," she told me. "Isla clutches it all night." I was sold. The only problem was that the safe sleep guidelines to protect against SIDS issued by the American Academy of Pediatricians discourage having anything in the crib before age 1, and don't specifically address "transitional objects."

When can you introduce a lovey? Well, it depends on where you live. The Canadian Pediatric Society advises against allowing any soft bedding and toys, but seems to exclude the type of muslin lovey that my friend's pediatrician advocated. The Australian anti-SIDS organization, Red Nose, advises no soft toys in the cot until seven months of age. Your parents likely say something different again. "We would just bury you in soft toys until you went off to sleep," my mum told me. "You loved it!" She is also a strong proponent of long-verboten crib bumpers and keeping one hand anchored with a wine glass while cradling newborn babies. When my daughter went through a phase of getting her leg stuck in the crib bars, I recall telling myself in a shrill internal song, "better to lose a leg than suffocate on a Laura Ashley floral!"

But the lovey... I felt torn. Now that my daughter was a lively, social 6-month-old, I imagined her crib to be oppressively lonely at night. With a lamb, or a bunny-shaped piece of muslin, she could have a friend, like Tom Hanks had Wilson.

Maybe Canada's more lax sleep guidelines are the reason Canadians are so nice, I thought. The entire explanation for Ryan Gosling. My friend bought a pack of four muslin squares and took turns wearing each inside her bra to impart that magic maternal scent. I imagined her daughter clinging to the lovey at night, a tiny raft in the still night ocean.

I asked my pediatrician again. "What about just a tiny breathable square of fabric? A swatch of silk? What about a bunny head, but not a full bunny until her first birthday?"

She remained composed. "Nothing in the crib before one."

I narrowed my eyes at her, trying to see if there was a subtext there, a wink. She narrowed here eyes back.

In the middle of the night, when the baby monitor crackles with your child's wails, everyone can use something to hold onto. For me, it was my 6-month-old, who stopped fussing the moment I picked her up, sitting up like a puppet in the crook of my arm, looking ahead with me as we strode to the armchair. For my daughter, that thing was my breast.

Part of the problem with teaching your kids to sleep is that you likely never got over the dark yourself. I won't look in the mirror during a night trip to the bathroom for fear of what I'll find there (Bob). Our dog's instinct to stay close to his pack at night has seen him piss on our actual tent from the outside during a camping trip. We are all constantly diving under the covers, thinking ourselves lucky to have survived the midnight kitchen. But our babies don't have covers to hide under. Looking at my daughter on the monitor, I'm reminded of the way the bed sheets fly off into the air in a classic alien abduction.

The solution to her middle-of-the-night waking was ultimately to sleep-train her — a small horror of its own, if very successful (we used Healthy Sleep Habits, Healthy Child by Marc Weissbluth as our manual). We call it self-soothing, as though a baby needs only their wits and a wide, clear crib to cobble together a night's sleep.

The day she turned one, I let Scout bring a silky soft toy to bed — Bunny became a fast friend, and now sits at the table for meals and resembles a piece of carpet.

It's not that I disagree with my friend's Canadian pediatrician, nor that I think my friend put her baby at risk. It's just that with so many parenting choices to make, choosing from a large smorgasbord complicates things, as guidelines begin to contradict each other. Better to stick within a single narrow approach. If I was in Australia, I'd give my child a lovey at seven months old happily; in Canada, I'd do it at six months.

Here in the U.S., we will all have to cling on a little longer.