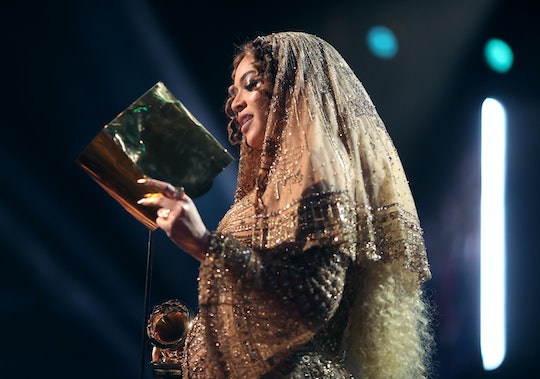 The One Thing All New Moms Should Know About Jaundice

Last week, Beyoncé and Jay-Z reportedly welcomed their twin babies, according to multiple press reports. While Bey and Jay have yet to issue a statement, today TMZ reported that Beyoncé and Jay-Z's babies are probably being treated for jaundice. The babies are reportedly being kept "under the lights," a treatment used to reduce the elevated bilirubin levels that cause jaundice in newborn babies. In the wake of this news, there's been lots of discussion of newborn jaundice, most of which is reassuring. But there is one thing new moms should know about Beyoncé's twins' condition.

In the vast majority of cases, newborn jaundice is a common, relatively minor issue. Many babies have mild jaundice that disappears on its own. Jaundice is especially common among babies who were born preterm, as Beyoncé's twins reportedly were, because preterm babies' livers are underdeveloped and can't process excess levels of bilirubin. But even though most cases of jaundice are not cause for concern, in some cases if left untreated jaundice can lead to deafness, brain damage, or even death. I know this mostly because my baby was almost one of these cases.

Jaundice is caused by excess levels of bilirubin, which is the product of your body breaking down red blood cells. The liver is in charge of making sure that the body disposes of bilirubin the way it's supposed to (i.e., when your baby pees and poops). But in the case of jaundice, the body overproduces bilirubin and the liver is unable to excrete all of it, causing the skin and eyes to appear yellow.

In most cases, when a newborn baby is diagnosed with jaundice, doctors place the baby under blue lights, which are supposed to help break down bilirubin levels. Typically, the lights do the trick and you are sent home with your baby within the 2-4 day period after giving birth. But that's not what happened to me.

Almost 5 years ago, I gave birth to a full-term, perfectly healthy baby boy. A few hours after giving birth, I was told by doctors that my son's bilirubin levels were slightly elevated. They nonchalantly explained to us that a normal bilirubin level for a newborn was about an 8 and his was just over 10, but it wasn’t a cause for concern. So my son was placed under the lights in the hospital nursery to reduce his bilirubin levels. While lying in the hospital bed, I looked up jaundice in newborns to reassure myself that it wasn’t anything to worry about, and it seemed like everything would be OK. We were released without any issues.

After the first day of being home with my baby, I was so exhausted that I honestly couldn’t have told you up from down. By the second day, I started feeling a bit better, but I did notice that my baby seemed more lethargic and less interested in eating. Because I was a new mom, I had no idea what that meant, and I was honestly ready to shrug it off as a newborn thing. But when his eyes started looking yellow, an alarm went off. I called his pediatrician immediately.

A million and one thoughts ran through my mind. The main one was: What did I do wrong?

My very kind and understanding pediatrician said my son was probably fine, but just to be safe, I should get his blood work done. His calm and reassuring tone made me feel relaxed, but the next day, my baby's eyes were still yellowish, and he was still noticeably lethargic. I took him to the lab for blood work, but I was so convinced that it was a minor issue that I invited my friends over to meet the new baby that evening. At 6 p.m., the doctor called. His words are ringing in my ears to this day:

We rushed my baby to the children’s hospital. When we got there, the doctors and nurses were already waiting for us, which confused me and scared me even more. All of this for jaundice, I thought. After retaking his blood to test his levels, they told us that his levels were at a life-threatening 38, and he needed a blood transfusion right away. In the hours to follow, I felt like I was tumbling down a long, dark tunnel. I couldn’t understand how a few days ago, I had a healthy baby boy. Just like that, he was about to be taken from me. A million and one thoughts ran through my mind. The main one was: What did I do wrong?

Yes, jaundice is common, but it is not minor.

Over the next 7 days, my son was under the lights in the NICU, unable to be held for long periods of time. I felt like I had completely screwed up as a mom, and I spent every day apologizing to my baby boy. I had no clue that jaundice was even remotely dangerous. The doctors had told me it was fine.

The doctors were never able to figure out the cause of my son's jaundice. It could have been a range of things, from our opposing blood types to the fact that my milk didn’t come in until he was already in the NICU, a condition called breastfeeding failure jaundice. But thankfully, because of the doctors, staff, and my motherly instincts, my baby boy is almost 5 and totally healthy.

I have enormous sympathy for Beyoncé. I remember the immense fear and panic I felt when my son was in the hospital, and the fact that paparazzi are swarming her hospital room probably doesn't help matters. I'm sure her babies are getting the best care in the world and that they'll be absolutely fine. What Beyoncé and her (likely very healthy) babies might not realize, however, is that they are bringing visibility to a condition that is often glossed over by doctors or considered minor, which does moms like me a huge service. Even though jaundice is usually not such a big deal, it gives us an opportunity to help those few for whom it turns out to be a very big deal. T

What I want to say to new moms who suspect their baby might have jaundice, or that the jaundice might be indicative of a larger problem, is this: yes, jaundice is common, but it is not minor. It is unpredictable and it needs to be monitored. That's why mothers need to trust their instincts. Doctors and nurses are amazing, but their advice doesn't trump that feeling in your gut when you know something is wrong. I'm betting Beyoncé would tell you the same.