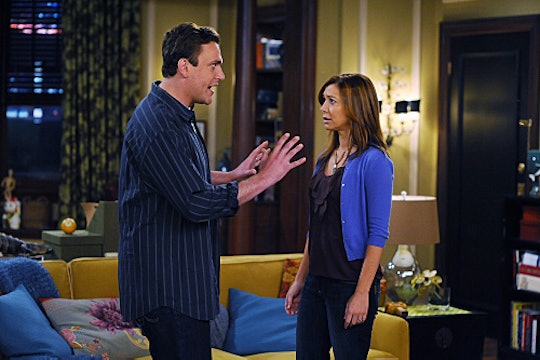 The One Thing Couples Can Do To Instantly End An Argument

It doesn't matter what stage your relationship is in, you and your partner have probably butted heads a time or two. (And if you haven't, it's most likely going to happen at some point.) Arguments between couples are nothing new, and they can't always be avoided, but they do have to be settled. There's just no healthy way to continue a relationship if your arguing escalates without any kind of end. So how do you do it? Do you have to spend hours talking it out until you're both blue in the face, does somebody just give up, is there one thing a couple can do to end an argument?

Yep. There is. And it's called "pausing."

If the phrase is making you think of a specific fictional couple on a hit TV show, I applaud your pop culture knowledge. But "pausing" to end an argument has been around before Marshall and Lily made it famous on How I Met Your Mother. It sounds too easy, but it's incredibly effective and beneficial for both you and your partner.

The way it works is simple. In the middle of an argument, when things are getting heated and the two of you have reached your limits with no other alternative, one of you says "Pause." And that's it. The argument is paused. Take that time to use the bathroom, grab something to eat, or even go to sleep. (I don't believe the whole "don't go to bed angry" thing. It's exhausting and everything looks worse in the middle of the night.) Pausing an argument doesn't mean you've forgotten about it or that it wasn't important, it means you've both realized that there is no good way to finish up what you're doing at that moment.

Think about it. When an argument gets too heated, what happens? People start doling out low blows. You call your partner names. You hurt their feelings. They hurt yours. You both become stubborn, exhausted, and fried from your argument. Eventually, you forget what started the damn thing and start talking in circles. Or worse, your argument branches out into a million other directions. By pausing the argument, you get a break. The two of you get to act like you weren't just in the middle of a shitty argument. And this act does a few things for the two of you.