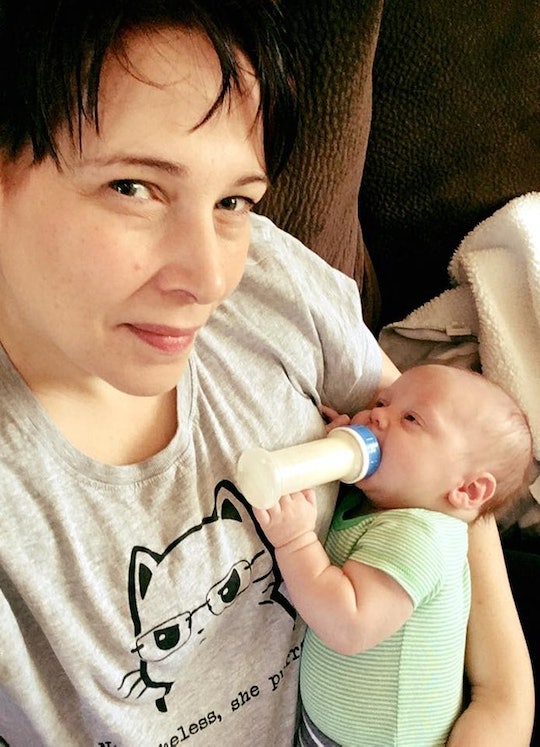 I always planned to breastfeed my babies. So, when I didn't make enough breast milk and had to supplement with formula, I felt lost. Like, literally lost in the formula aisle. I didn't know which formula to buy or bottles to get, or even how to mix them together properly. Unlike breastfeeding, there wasn't a class to tell me what I needed to know. In other words, I was completely unprepared to bottle-feed a newborn. As a result, I ended up ignoring something that could've made bottle-feeding so much easier.

I used to think that the most expensive formula and bottles had to, automatically, be best. Even though money was tight, I walked right by the store-brand formula options that were available for literally half the price of what every name brand formula cost. Afraid I would pick the "wrong" formula, I relied on brands I had heard of and that had been marketed to me, no matter the cost.

When I bought things like yogurt or cereal for myself, I compared labels and often picked a store-brand option to save money. When I was picking formula, though, I didn't look at the nutritional labels to compare options. If I had, I would have known that store-brand formulas often have the exact same ingredients as more expensive options, at a way more affordable price.

Instead, I allowed the fear of giving my daughter anything less than the best drive my purchasing decisions. To be perfectly honest, I felt so guilty about not being able to breastfeeding exclusively and having to use formula to supplement, that I bought the most expensive one on the shelf to assuage that guilt, too. The one I picked promised to be closest to breast milk, was made from only organic, non-GMO milk, and included DHA and ARA. I had no idea what any of those things meant, but the label told me they were important for my baby.

Looking back, I wish I hadn't walked by the store-brand cans and spent all that money on organic formula that, in the end, my baby didn't need.

According to Dr. Chad Hayes, the pediatrician behind A Formula for Success: The Ultimate Guide to Infant Formulas, all infant formulas in the U.S. are regulated by the Food and Drug Administration, so they all have to meet the same nutritional guidelines. In other words, most babies will do just fine on any formula, and name brand options aren't necessarily better or even different than store brands. Looking back, I wish I hadn't walked by the store-brand cans and spent all that money on organic formula that, in the end, my baby didn't need.

Thankfully, when my daughter was around 3 months old, a wise formula-feeding mom friend suggested I try a store-brand formula to save some money. To my surprise, my daughter actually did way better on the the generic version of "gentle" formula, than she had on the more expensive organic option, which gave her horrible constipation. And, as an added bonus, I saved hundreds of dollars.

The entire feeding process was complicated, messy, and time-consuming. Wasn't bottle-feeding supposed to be easy?

Then came our struggles finding a bottle she would actually take. The entire process was so confusing, which only made me feel more deficient as a mother. So, once again, I went with the most expensive option and purchased a ton of pricey glass bottles. Again, I relied on the belief that expensive automatically equalled better, and those specific bottles promised to make her transition from breast to bottle effortless, reduce gas and colic, and have nipples that were as close to a human nipples as molded pieces of silicone can get. Yeah, my daughter hated them. And to really add insult to injury, they came with a million different parts to clean.

So, rather than force her to take a bottle, I used a supplemental nursing system — basically a bottle with a tube. I would hold the tube next to my nipple, put both in her mouth, and she was able to drink some formula while breastfeeding. Yes, that sounds about as fun as it sounds. The entire feeding process was complicated, messy, and time-consuming. Wasn't bottle-feeding supposed to be easy?

As a new mom, it was surprisingly easy to fall for all the hype surrounding infant feeding.

Then, one day out of sheer desperation, I tossed the cheapest bottle I could find in my cart. At that point I was willing to try anything, and the next time I fed my sweet little girl, and much to my surprise, she loved it. That bottle cost less than $1.00, was easy to clean, and most importantly made feedings so much easier. I'm a little ashamed to say that the super-fancy bottles she hated cost 10 times that much.

When my next baby was born, I had, thankfully and for the betterment of my bank account, learned a thing or two about bottle-feeding. I ditched my supplemental nursing system, and waited until my son entered the world and started eating to see which bottles would work for him. Of course, those bottles were different than the bottles my daughter preferred, but at least I didn't waste an unnecessary amount of money on bottles he would have hated. I also started him on store-brand formula right away and, as I expected, he did just fine.

As a new mom, it was surprisingly easy to fall for all the hype surrounding infant feeding. Bottle-feeding was harder than I thought it would be, but I think it's because I made it that much harder. It became a much more enjoyable experience when I stopped buying the most expensive options and started opting for what actually worked for my baby. It's not always about the money, honey.