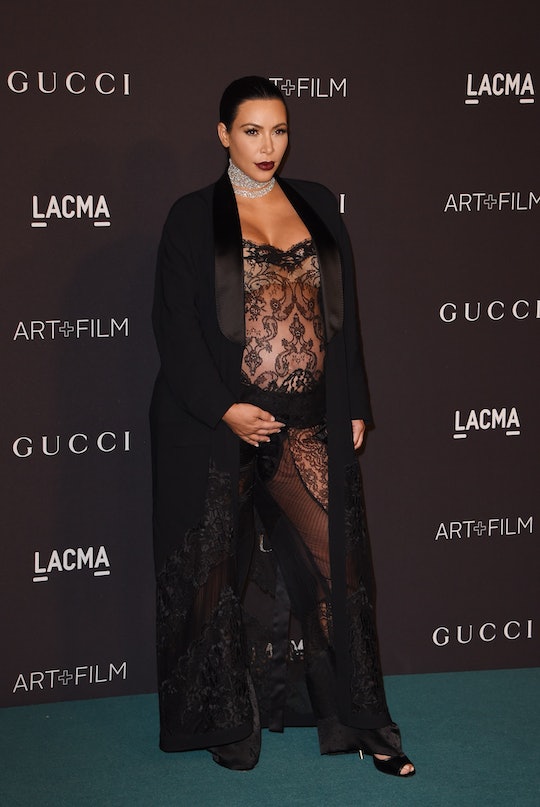 I was six weeks pregnant and hunched over the toilet, puking for the third time in the past two hours, mentally crossing Cheerios and jelly toast off of my list of foods that would I could keep down. It was the third day in a row (of about 150 more) that I'd found myself in this position and, while tiny, my baby was already letting me know who was boss. Cut to several weeks later and I was still puking, except now I was pretty much nauseated at all times of the day and was taking “naps” on the floor of the private bathroom of my office. I’d become a shell of my former self who just needed to lay down for 10 minutes in between vomiting and my job. Being pregnant, as it turned out, wasn’t all it was cracked up to be. Which is why I was pleasantly surprised (and delighted) to hear that even with her second child, Kim Kardashian West still hated being pregnant. Say what you will, and like her or not, but when the Kardashians speak, people listen. And this time around, I was so, so grateful that Kim was speaking up and admitting what I’d just experienced to be true: Pregnancy just sucks for some of us.

Don’t get me wrong – the outcome of my pregnancy was incredible, life-altering, and has given me lots of adorable, soft baby hugs that never, ever get old. But the process of my pregnancy was something I could do without. I went through those entire 10 months hopelessly searching for the elusive bright side, and it’s true that my daughter is worth every minute. But by the time I was seven months pregnant, I was over trying to be an optimist and settled squarely into the realist camp. I wasn’t “glowing,” I was sweating from walking to the subway in the middle of winter. And the only seemingly “magical” things about me were how quickly my face, feet, and hands were swelling, that I couldn’t put my socks on without grunting, and how I was still throwing up on the regular.

I know and understand that I was incredibly fortunate to get and stay pregnant and give birth to a beautiful, healthy baby girl. But I don’t think these things are mutually exclusive. I can be eternally grateful for getting to carry and deliver my daughter and eternally underwhelmed by the 10-month process that brought her here. I reserve the right to love my baby but hate the journey that led her to me. And similar to Kardashian West, I suffered the trials of preeclampsia, which added more than a few extra levels of stress, pain, and frustration to an already trying process.

I marvel at women who truly do seem to glow throughout their pregnancies and I have several friends who thoroughly enjoyed theirs, but the fact that I wasn't one of them made me feel guilty, like I was somehow doing it wrong.

Around month seven of my pregnancy my blood pressure started gradually rising, sometimes randomly spiking, plaguing me with headaches, dizziness, and an overall disconcerted feeling. I was responsible for another life outside of my own, and watching these numbers creep higher and higher was terrifying. Then finally, at my eight-month checkup, the doctor looked at me with concern in her eyes and explained that I'd no longer be able to commute in and out of the city for work. I'd no longer be able to go to the gym. I'd no longer be able to, well, pretty much do anything, actually, because I was on mandatory bed rest until this baby was fully cooked and ready to come into the world. This was a precaution by my doctor since I was far too swollen and my blood pressure was much too high to risk pretty much any unnecessary movement that would jeopardize the baby and me. I was constantly monitored, put on blood pressure medication, and was frequently reminded about how important it was that I stay on bed rest because of the high risk of kidney damage, seizures, a stroke, or bleeding in my liver, plus the possibility of my placenta failing, rendering it unable to protect my still-growing little daughter. Like Kim, I was miserable.

Kim was incredibly frank about her disdain for her second pregnancy, writing on her website: "I'm gonna keep it real: For me pregnancy is the worst experience of my life! LOL! I don't understand one moment of it and I don't understand people who enjoy it." Although I may not go as far as to say that it was the worst experience of my life, I wholeheartedly agree with her that I don't understand people who enjoy it. Kim also perfectly described what I was going through with my preeclampsia when she was talking to Ryan Seacrest during her first pregnancy when she said:

I was waiting for this amazing experience where I can just do whatever I want, eat whatever I want, feel great... and it hasn't been that way... I've had a lot of pain everywhere... I'm in pain, physically.

This was really important for me to hear because I felt like Kim was using her platform to validate my own experience. I could be completely in love with my daughter with no love-lost over the pregnancy I had to endure to hold her in my arms. Don't get me wrong, I marvel at women who truly do seem to glow throughout their pregnancies and I have several friends who thoroughly enjoyed theirs, but the fact that I wasn't one of them made me feel guilty, like I was somehow doing it wrong.

Of course now I know that just because pregnancy wasn't for me doesn't mean motherhood isn't. I am happily settled as the mom of a 7-month-old daughter and I even contemplate the idea of possibly going through it all again for her sibling some day, yet that doesn't mean you'll find me booking a maternity photoshoot or smiling at the idea of getting up to pee 14 times during the night, either.

People have criticized Kim Kardashian West and others who discuss how much they don’t like being pregnant (Melissa Joan Hart, Jaime Pressly, and Hilary Duff, to name a few) because they feel it's disrespectful to those who cannot carry a child or in some way means they don't or won't love their growing child. But I disagree. More women should feel comfortable talking about their pregnancy experiences – the good, the bad, and the ugly. And we all know that this in no way means we don’t have gratitude and love for our children beyond measure. It simply means that, when it comes down to it, growing a person is hard. It’s sometimes painful. It’s exhausting. It sucks. It's also totally worth it. And that all goes hand-in-hand.

These conversations are important for women to keep having because we need to be OK with talking about the not-so-great parts of pregnancy and supporting one another on those journeys. Loving your pregnancy and embracing it are wonderful. We should celebrate those women. We should also embrace the hundreds of thousands of women out there who aren't celebrating every time they groan while rolling out of bed. Kim's admission that her pregnancy wasn't the best moment of her life marked an important moment in my own, and I'm incredibly thankful for that.