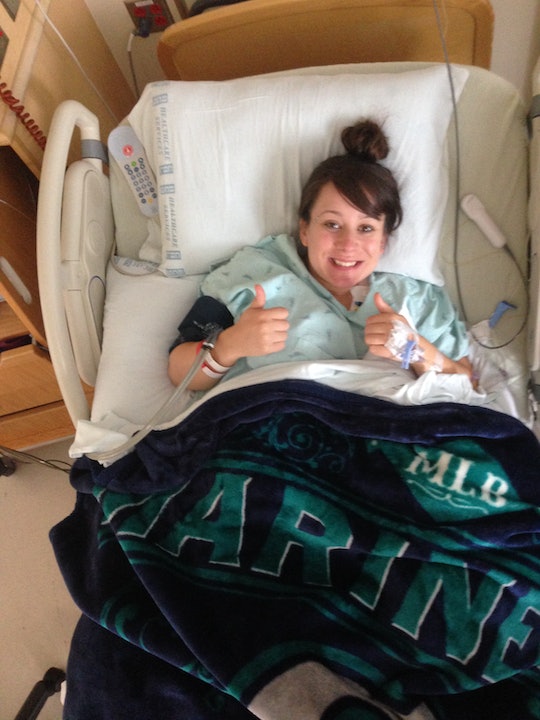 I was excited to tell the majority of my friends and family about my pregnancy and ensuing journey into motherhood, but I was most excited to tell my been-there-done-that-already-totally-rocked-birth friends with kids that I'd soon been joining the ranks. I knew I'd be able to learn from their experiences, better prepare myself for labor and delivery thanks to their knowledge, and feel all-around more empowered knowing other women I loved and trusted had already been through everything I was anxious and nervous about. Instead, I (mostly) heard horror stories of traumatic births, shared in painful detail, all meant to try to persuade me into having a home birth instead of a delivering in a hospital with doctors, nurses, and access to pain medication. Looking back, I wish someone had to told me that they knew whatever I'd planned would work out. I wish someone had stood in my corner they way I'd done for them. The one thing I needed to hear before I gave birth should've been that I could do this and that people believed in me.

I started to doubt a team of doctors and nurses I had previously felt extremely comfortable with and confident in. I even started doubting myself.

Instead, I was bombarded with worst-case scenarios that made my natural pessimism seem hopeful and positive. Instead of feeling prepared, I felt manipulated. I knew many friends were just sharing their own personal experiences (and some that weren't theirs, but their friends and/or family members') and, obviously, those stories deserve to be told. But I also felt like I was a pawn in an on-going debate on what should be considered the "best" way for a woman to give birth, and each terrifying story was a slight, subtle, somewhat cognizant but mostly well-intentioned attempt to get me to see one side of a multifaceted and complex discussion. I felt like instead of making sure I felt good, every piece of advice left me worried I was doing something wrong.

So instead of feeling empowered, I just felt frightened.

Fear is a powerful motivator, and when women are constantly told that giving birth in a hospital is almost like guaranteeing an emergency c-section, self-doubt becomes second nature. People warned I'd be pressured into having an epidural and that would, without a doubt, lead to an IV bag of Pitocin, and when labor didn’t progress on a pre-determined schedule, I'd be forced into an emergency c-section. I started to doubt a team of doctors and nurses I had previously felt extremely comfortable with and confident in. I even started doubting myself. Would I be able to stick up for myself and my plan, if necessary? Am I really doing the right thing? Am I making a big mistake that could put my son at risk? Do I even know what the hell I'm doing with anything in my life? Should I even become a mother?

Not once did they judge me and I never detected an air of hesitation or a condescending attitude. When I said I didn’t want Pitocin, the nurse nodded, the doctor said OK, and I wasn’t pressured into anything that didn’t feel right or unnecessary.

Before my water broke, I knew my birth was going to be a difficult one. I was initially pregnant with twins, but lost a baby at 19 weeks. The deceased twin, and the twin that was still growing and kicking and hiccuping, would both need to be delivered, which posed some potential complications and problems. I was going to be in a hospital, and I was going to attempt to have a drug-free labor and delivery, but would have access to medication if necessary. The hospital provided me with a birthing ball, a birthing tub, the freedom to walk the halls and anything else that I thought would help me bring our son into the world. It was because of the complications that I knew — even after hearing scary stories and terrifying situations — that I was making the right choice. A home birth was not an option for us to begin with, so we had to stick to our plan because, well, that was the only plan that was going to safely work for me and my baby.

I didn't ask friends and fellow moms for advice so that I'd be scared into making the same choices they had; I asked for their honest opinions so that I could feel validated and more confident about my own experience.

In the end, I had a wonderful experience giving birth at a hospital. I walked the labor and delivery halls and used a birthing ball and tried my hand at a birthing tub. I was included in every single conversation, not talked down to or at, and I felt like every part of my birth plan — even and especially when it changed — was honored. When the pain became too much and 10 hours of non-medicated labor took its toll, I told the nurses I wanted to change my plan and asked that they give me an epidural. Not once did they judge me and I never detected an air of hesitation or a condescending attitude. When I said I didn’t want Pitocin, the nurse nodded, the doctor said OK, and I wasn’t pressured into anything that didn’t feel right or unnecessary. When the time came to push, I did, and I felt wholly in control and marvelously empowered.

Which should be the real intention of anyone who shares their birthing story. Whether you believe in scheduled c-sections or you think women should give birth in the natural wilderness of their backyards, providing women with factual, non-biased information so that they can feel empowered to make their own decisions should be the ultimate goal. I didn't ask friends and fellow moms for advice so that I'd be scared into making the same choices they had; I asked for their honest opinions so that I could feel validated and more confident about my own experience. I asked for advice and for their help because I hoped that they'd remember how they felt when they were in my position — and that they'd remember that what works for some does not work for others.

Though I'm incredibly proud of and happy with the way I brought my son into this world, I don't ever think that it's helpful share the terrifying details of every worst-case scenario because somewhere, right now, there’s a woman who just found out she's pregnant and she's already thinking about her birth plan. She'll do what we all did: ask her close friends a plethora of questions and research the best practices ad nauseam hoping to learn from others and prepare herself as best she can and feel as empowered as possible. I want her to feel like she can do this, because I know she can. It's what I wish I'd heard.

More Like This
Mom Gives Birth To Record-Breaking 16-Pound Baby
22 Valentine's Day Pregnancy Announcement Ideas Sweeter Than Candy
Fun, Sexy Maternity Lingerie, For When The Mood Strikes
Here's What Pregnant People Actually Want For Valentine's Day
What Parents Are Talking About — Delivered Straight To Your Inbox