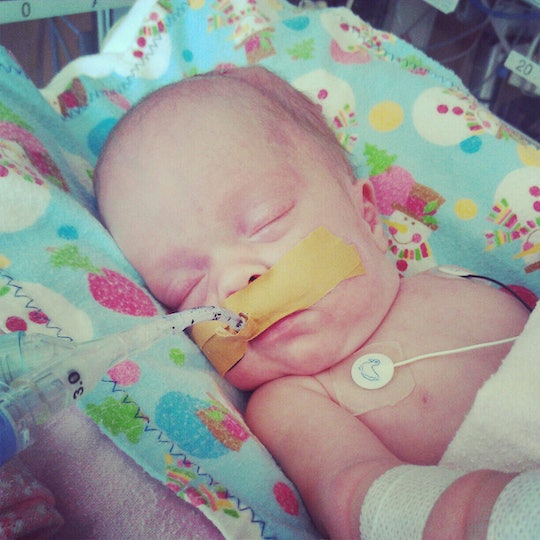 The first few days after my twins, Madeleine and Reid, were born prematurely at 25 weeks gestation were full of contradictions. That time has been singed into my memory in painstaking detail while at the same time being a complete and total blur I can barely remember. It was joyous and exciting and heartbreaking and terrifying in the worst ways possible. I was so in love and alive and also completely detached, constantly feeling like I wanted to stick my head in the sand and never pull it back out again. When I tell the story of my children’s birth, it’s mostly pretty easy for other people to understand that it was probably awful. And it absolutely was, especially once we learned that Madeleine had suffered a significant — and potentially very dangerous — brain hemorrhage. But what’s much more difficult for most people to understand is how complicated it is to exist in the NICU when your children are sick and you have no idea how it’s going to end. What no one says about the moment you find out your baby is sick is that your brain learns to function in an entirely different way to make sure you don’t completely fall apart. And that, even when it’s all over, that experience has changed you forever.

When I was in my early 20s, I took a first aid and CPR course. I remember almost nothing from that, and you should seriously hope that you never have to rely on me to revive you in an emergency because I can guarantee you’ll I’ll probably just freak out and cry. But there was one thing that the instructor said that came back to me in the NICU, because it turned out to be the best way I could think of to explain what it was really like to live for months in that strange hospital-parent limbo.

She was talking about hypothermia, and while I don’t actually have a clue what she said you're supposed to do to help someone in such a situation (I wasn’t lying about being totally useless in an emergency), what I do remember was her explanation about how the body responds. When your body temperature drops beyond a certain point, she explained, you go into a kind of survival mode, and all non-essential bodily functions (that is, pretty much anything that doesn’t help your heart keep beating and your lungs breathing) gets turned off. Even though she meant it in a purely physiological, technical kind of way (that your body is literally losing its ability to properly function), when I found myself in the NICU faced with the possibility that one or both of my children might die, it began to feel like a pretty apt metaphor.

We are still so scared, still so heartbroken, still so afraid of losing our children, that they may as well have been born a week ago. But it also feels like it never happened, like it’s something our minds have stored in a vault somewhere, and the only way we can be sure we actually went through it is by looking at the photographs.

When we first learned about Madeleine’s diagnosis, I was devastated. There were so many days where all I could do was sit next to her incubator and cry for hours, apologizing to this impossibly tiny child who wasn’t supposed to be alive yet, and who deserved so much more than what she was going through. That pain was unbearable, heartbreaking in a way I hope I never have to feel ever again. But — perhaps because it was so unbearable — that wasn’t what my husband and I felt the majority of the almost-four months we spent in the hospital with the twins. Instead, our brains recognized we couldn’t possibly make it through if we were both feeling constantly devastated, so they blurred out the parts that were most painful and it allowed us to keep going. It was, I guess, emotional hypothermia.

It’s been three years now, and Matt and I don’t talk often about that time anymore. Our kids are healthy and vibrant and energetic, and they keep us so busy we don’t have a whole lot of time to think about it. But, every now and then, we’ll lie awake in bed beside each other at night and one of us will say, “my goodness, can you believe that happened?” And the answer, always, for both of us, is yes and also not at all. We are still so scared, still so heartbroken, still so afraid of losing our children, that they may as well have been born a week ago. But it also feels like it never happened, like it’s something our minds have stored in a vault somewhere, and the only way we can be sure we actually went through it is by looking at the photographs.

Having a sick child is not necessarily about being strong or soldiering your way through out of sheer will and determination. It’s about fumbling your way along each day with giant mental blinders on, and hoping eventually you’ll come out the other side.

So often I’ll hear a heartbreaking story on the news or social media — a mother losing her child, for example — and I’ll think, “I don’t know how she is surviving.” I feel almost certain that I’d never be able to make it through, that I’d probably just die right on the spot from pure heartbreak if anything happened to my children. But then I think, if her brain is anything like mine, maybe she’s in hypothermia mode too. Maybe her brain is trying to keep her immune to the pain so that she can keep breathing, keep waking up in the morning and putting one foot in front of the other.

Of course, in reality, I have absolutely no idea how she’s feeling, and I hope that I never do. But what I do know — what I realize now, and what countless other parents before and after me know too — is that having a sick child is not necessarily about being strong or soldiering your way through out of sheer will and determination. It’s about fumbling your way along each day with giant mental blinders on, and hoping eventually you’ll come out the other side. And, as strange as it sounds, it's also about knowing that that little bit of mental trickery is probably one of the biggest gifts you can get. Because you have to make it through, one way or another.