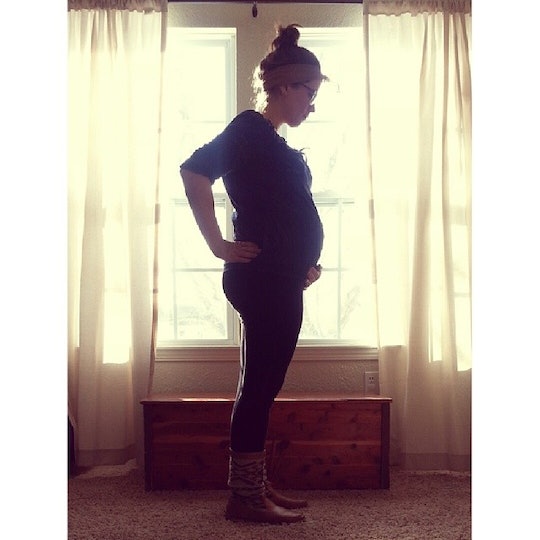 The One Thing That Makes Me Nervous About Having A Son

When my husband and I first started talking about becoming parents, I felt certain I wanted to be a mom of boys. I know that is totally a ridiculous thing to think, since I have no say in the matter, but it's true. Unsurprisingly, at first, it didn't work out that way. But after four years and two daughters later, I'm expecting my first son this summer. I'm thrilled, of course. But as for all that certainty I felt about being a mom of boys all those years ago? Well, I have to admit I'm pretty nervous about the change. The one thing that scares me about having a boy this time around is that I don't want to raise my son to play into the stereotypical structure of what it means to be a man, and I don't want to raise him surrounded by those expectations, either. But after having two daughters, this is whole new ballgame.

Long before I knew the sex of the baby I was carrying, I just felt like something was different throughout this entire pregnancy. I know there isn’t much proof to support the idea that the sex of your baby has an effect on how you feel, but still, this is the sickest I've ever been. I was beginning to wonder if this was my first sign I might be expecting a boy. By the time our anatomy scan appointment finally rolled around, I was seriously starting to lean towards boy while my husband was still certain we were destined to be parents to daughters.

Sitting in the ultrasound room with one daughter trying to climb onto the medical bed with me and the other playing on my phone, I could barely believe it when I found out we're having a boy. I was so emotional at first, seeing my active little baby dancing around the screen, and I was surprised to find myself tearing up when the tech told us we are going to have a son.

It wasn’t until a few days had passed, until the initial surprise and excitement started to settle, that I realized I am actually kind of nervous to have a son. It feels silly to admit that I'm not sure how I will do or how well I will make the adjustment from parenting girls to parenting a boy for the very first time. I know that parenting a boy should basically be the same as parenting as a girl. Sure, there are some small differences to consider, like whether or not we should circumcise or whether or not we should keep his hair short or let grow wild and curly like his sisters’. Overall, the day-to-day of parenting a boy should be pretty much the same. The reality, though, couldn't be further from that.

I want to raise a son with a more complex understanding of what means to be a male. I want to encourage him to pursue emotional health over emotional isolation. I want him to be free from the idea that men should be macho or even aggressive to succeed in this world.

Our society has made a habit of treating boys much differently. In fact, it seems we have a whole separate set of expectations for boys that typically aren’t expected of girls. One education expert, Kathleen Palmer Cleveland, discusses how boys are held to an code of unreasonable masculinity. Expectations such as boys don’t cry, ask for help when they need it, or even show affection towards friends, are all a part of this code. It bothers me to know that, as a whole, our society prefers our boys don't show their emotions. When I think about the little boy growing inside me, I hope he'll grow into a compassionate and affectionate brother, son, and friend, not an unfeeling man who puts on a brave face.

This is what makes me nervous about raising a boy. I want to raise a son with a more complex understanding of what it means to be a male. I want to encourage him to pursue emotional health over emotional isolation. I want him to be free from the idea that men should be macho or even aggressive to succeed in this world. I want him to feel free to express how he feels and to openly ask for what he needs from his mom, his sisters, other men, and the many people around him.

I am grateful to have married a man who is sensitive and expressive, and I know he'll model a different kind of strength to our son, a strength that knows that is OK to hurt and to show love.

In theory, this sounds simple, but I know in practice it isn’t so easy. Even if his dad and I work hard to validate his feelings, to avoid expecting him to “suck it up” or “be tough,” what happens when he heads to school and is surrounded by a whole new set of expectations of manhood? I hope that providing him with a home that he views as a safe haven will give him to freedom to explore all aspects of who he is, especially when it comes to how he feels about himself and the world around him. As the younger brother of two girls, I can't help but hope his sisters will be an example to him of emotional health, sharing openly and honestly with each other about their lives, from the day-to-day events to bigger, more life-changing occurrences. I am grateful to have married a man who is sensitive and expressive, and I know he'll model a different kind of strength to our son, a strength that knows that is OK to hurt and to show love.

When it comes to raising a boy, I'm not sure what else to expect. I know my friends and family swear it's different. I've heard boys are more rough and tumble, but I sometimes find that hard to believe when I watch my girls dangling worms in the air or wrestling on the couch. All in all, I feel that if raising my next baby is vastly different from raising my first two, it won't be because he is a boy — it'll be because he's just his own person, and that will be what sets him apart. Just like my first two, even though they are both girls, they're still wildly different children. I have one who is cautious and calculating about most parts of her day, and the other is a free spirit who needs to be watched at every moment.

I can’t protect my son from everything, but that won’t stop me from trying to instill a solid foundation of character in him. I want to do my best to raise a confident and kind child, but I can’t help but feel I am working against an entire society who wants to put him in a really small and limiting box. The plan, as it was with my first two children, is to do my best — and hope that is enough.