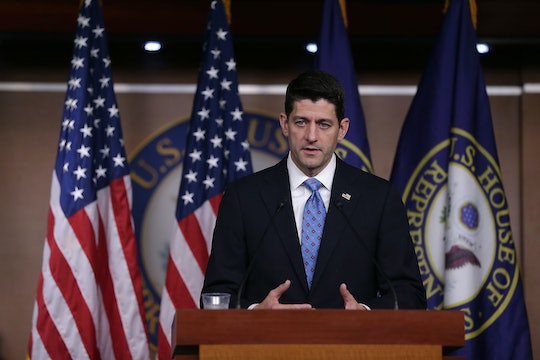 It seems there's a new health care bill being floated by Senate Republicans, and it's just about as awful for women's health as you might expect. As the GOP continue to diligently move forward with efforts to repeal the Affordable Care Act, they continue to come up against road blocks. The initial replacement bill by House Republicans barely managed to earn enough votes after a second attempt, and it looks as though there could be one thing that keeps this health care bill from passing as well.

That one thing is abortion, for more reasons than one.

The initial health care bill aimed at repealing the ACA (also known as Obamacare) passed by House Republicans aimed to deny access to federal tax credits for any insurance providers that covered abortion services. Senate Republicans are set to introduce a new bill, called the Better Care Reconciliation Act, and it's no improvement for women's access to reproductive health care. While the language in the Senate's health care bill is deliberately obtuse, this new bill would essentially bar family planning centers, including any that offer abortion services (unless deemed medically necessary), reproductive health services, and otherwise from receiving federal funds through Medicaid. In other words, no federal funds for Planned Parenthood.

Senate Majority Leader Mitch McConnell, who penned the BCRA in secret along with 12 other senators (all men, in case you are interested), has run into an issue with the abortion provision on several levels. First off, many health care plans across the country offer abortion service coverage under the ACA. Second, the Senate is looking to rush the bill through a vote to prevent a possible Democratic filibuster, but the abortion provision might not comply with the Senate rules of reconciliation, the special procedure which would enable them to bypass the Democrats.

At least two Republican senators have already formally objected to Sen. McConnell's inclusion of the abortion provision, Alaska Sen. Lisa Murkowski and Sen. Susan Collins of Maine. And of course, Democratic Sen. Elizabeth Warren was especially verbal on the Senate floor on Wednesday after reading the new health care bill, according to Vox.

The abortion issue has left the Senate Republicans at an impasse; if the provision doesn't meet reconciliation guidelines, it might very well have to be taken out. And if it's taken out, anti-choice Republicans are unlikely to pass the bill. As Texas Sen. Ted Cruz told The Hill:

Senate Republicans could see their bill felled by abortion access. Poetic justice, anyone?