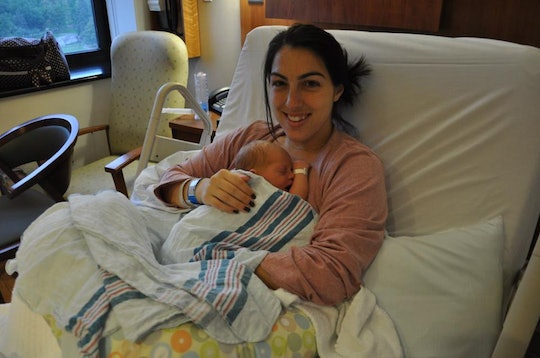 What Every Postpartum Mom Absolutely Needs

Guys, I'm not going to do that thing where I don't get to the answer until somewhere in the middle of the article. The answer is food. Food is the one thing you absolutely should bring to a postpartum mom. Technically, you do not have to read any more of this article. In fact, if there's a postpartum mom in your life, put this aside for now, get some food (make it, buy it, order it, I don't care) and bring it to her immediately. If you've already brought her food, go bring her some more. OK, have we cleared out the slackers who have been remiss in their duty? Just the people who are expecting to be near a postpartum woman in the future are still here? Good. I hope you will continue reading, because I'd like to really stress why food is good under normal circumstances, but the most good when you're talking about it in the context of new motherhood.

For starters, pregnancy is a long and hungry time. It's hungry because growing a fetus is a ton of work, even when we're sleeping, and we need food to fuel this noble endeavor. It's hungry because our hormones are going insane and we need to eat our feelings. It's hungry because there are a million and five foods some of us are paranoid about taking even a nibble of, lest we do irrevocable harm to our beloved babies before they are even born. Do you know what it's like to have a craving, to have physical and financial access to that craving, but be unable to partake of that craving for more than nine months? Do you know what it's like to see other people enjoying that craving in front of you?

Do you remember that episode of The Twilight Zone where that little boy could do harm to people with his mind, so everyone in his town was really nice to him all the time? Let's just say that if I, as a pregnant woman, had that little boy's powers, I would have used them to throat punch every relative, friend, and obnoxious co-worker who mockingly waved something delicious in front of my face saying "Mmmmmmm. So yummy! Don't you wish you could eat it?"

Because do you know what you don't have time for when you have a new baby? Anything.

Yes, you horrible human being. I do. I do wish I could eat it. Almost as much as I wish I could rip your still-beating heart out of your chest and eat that, too.

Now a postpartum mom is coming from a long-stretch of hunger, and it doesn't fade as soon as her child is born. In fact, birth may be the first time in a long time that she has been able to really indulge in anything. Bringing her food will facilitate that urge, and she will thank you for it. Oh, and if said new mom is breastfeeding? Multiply pregnancy hunger by a million and you're getting close to her level. In cases like this, it's probably best to send food, because there's a better than average chance that if you come to her with the food she may wind up biting off your hand in the feeding frenzy that will ensue. This will not be her fault. It will be your fault for not taking the proper precautions. No jury in the world will convict her.

Another reason you should not go to a postpartum mom without a delicious sandwich or enormous tray of lasagna in your arms? If you don't, she may not eat at all. Because do you know what you don't have time for when you have a new baby? Anything. (I bet you thought I was going to say cooking, but it's literally anything other than caring for the new baby.) OK, sure, the vast majority of postpartum women are able to get sustenance without people bringing her meals, but it's sustenance: not meals.

And, really, can you think of anyone more deserving of a meal than a woman who's just had a fully-formed human expelled from her body? I'm not even going to wait for you to try to come up with something because you can't. Because no one is more deserving of food than such a person. Sit down, close your mouth, make a frittata, and bring it to your postpartum friend.

OK, sure, the vast majority of postpartum women are able to get sustenance without people bringing her meals, but it's sustenance: not meals.

Of course, let's not get it twisted here: while meals are the most important (as they take the most time and effort), feel empowered to bring snacks, too. Because, really, can it be considered a middle-of-the-night feeding if a new mom is not also feeding her face some fancy cheeses she got in a Zabar's gift basket? Not in my America.