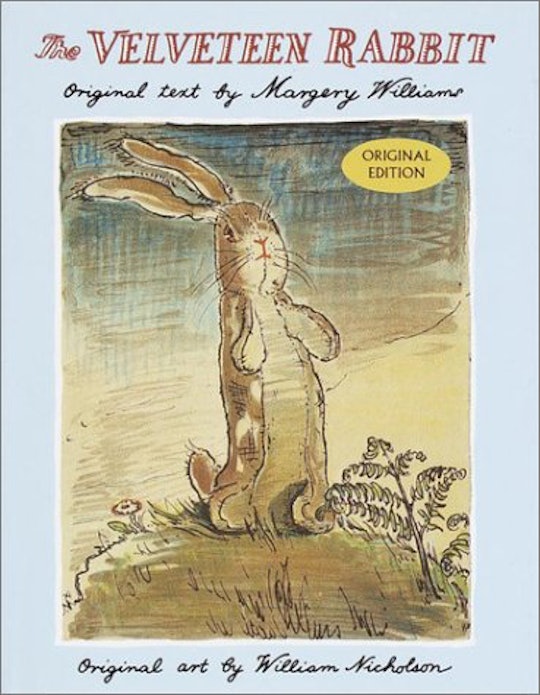 The One Thing You Never Noticed About 'The Velveteen Rabbit'

There are some children's books that just stick with you, no matter how old you get. I can still picture the bedroom from Goodnight, Moon like it was my own and I still get chills when I see a toy being well loved thanks to The Velveteen Rabbit. If you've never read the classic by Margery Williams, you need to do it now. And if you have read it, there's probably one thing you never noticed about The Velveteen Rabbit — it is the ultimate lesson in loving someone in order to save them.

I know, you already knew the story was about love, friendship, and the power of both. But think about the Rabbit and the struggles he faces before he becomes Real (capitalized in the book because obviously, this is a big deal). He looks at the other fancier toys, the ones that wind up and move, and feels like he can't compare. He worries that he'll never know what it means to be Real. And when the Boy took him to the woods and Rabbit met real-life bunnies, he immediately worried that they would make fun of him because he couldn't move on his own, feeling more and more insecure.

But as the Boy's love for Rabbit grows, so does his self-worth. After the little boy's illness, Rabbit is put in a bag to be burned because he's full of Scarlet fever germs, but after wriggling free, the nursery magic Fairy turns him into a real-life rabbit, where he lives happily, checking on the Boy as he grows.

The one passage that really proves how The Velveteen Rabbit is the ultimate story of overcoming bullies includes this quote: "You were real to the boy," the Fairy said, "because he loved you. Now you shall be real to everyone."

Are you crying? Cool, me neither.

Every night, I tell my daughter that she's important and that she matters, but I think The Velveteen Rabbit could teach her that lesson even more. The Rabbit felt like a nobody until he was loved by the Boy. And then? Then he was worthy. He felt like a real rabbit that others could see and he felt like he could take on the world when he was Real. It's proof that a little bit of love and kindness can go a long way in making someone feel like they belong in this world.

Think of all the horrific stories you hear about people hurting themselves and killing themselves because they didn't feel like they mattered. They didn't feel Real. And although love doesn't always solve everything, The Velveteen Rabbit is a great way to describe what it means to feel Real because someone loves you. You are alive. You are worthy. Someone has seen your worth and they love you for it. What could be more exhilarating than that?

Without the love of the Boy, the Rabbit surely would've sat in that bag of toys to be burned, feeling like there was no point. But because the Boy loved him so fiercely, the Rabbit had the strength to get out of the bag, even if he wasn't sure he could make it. He had to try, didn't he? He had to try because the Boy proved to him that he was worthy of trying, worthy of getting out of the bag.

So read The Velveteen Rabbit again and again. Read it to your little ones. Gift it to everyone you meet, including those who don't have children. Because the lesson is one that needs to be heard — love others so they can feel their worth. And love them hard.