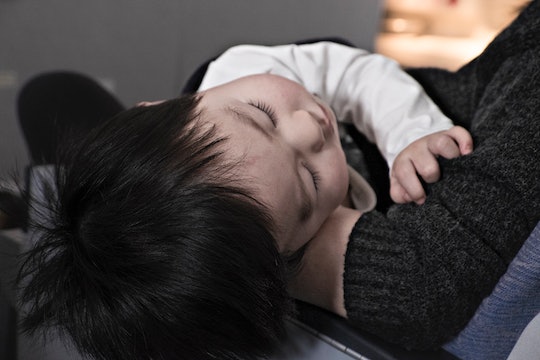 Getting a kid to sleep through the night in their own bed, for the first time, is a pivotal moment in every parent's life. Getting to that point, however, is anything but joyous. In an effort to get to that pivotal point, many families have turned to and found success with is the "cry it out" method. However, not everyone is on board with letting a baby cry it out. Some find it to be traumatizing, going so far as to tell parents that they're "torturing" their baby. Everyone has their opinions, sure, and while everyone should feel free to express, there's one thing you should never say to a mom who uses the "cry it out" method.

Parents have been practicing different methods of "sleep training" for decades. Everyone has a testimony as to what did and did not work for them, and for the most part, parents are supportive of one another on their journey towards getting a full night's rest. However, some people are devout in their own, specific methods to the point that they label themselves are experts. I get that we all have different beliefs and use different tactics and have different systems in place for ourselves and our families. I get that I could actually learn from many parents, especially the more seasoned, and am usually up for listening to kind suggestions (especially if it means I am going to get more sleep). However, when someone goes as far as to call my method of sleep training my children harmful or tortuous, a line has been crossed. Telling a mom that she is hurting her children purposefully when she's trying a method that has been widely accepted and used countless times, is hurtful, anything but helpful and, honestly, the last thing you should say to any parent.

However, when someone goes as far as to call my method of sleep training my children harmful or tortuous, a line has been crossed.

I might be "stern" in certain aspects of my parenting, simply because I'm determined not to raise rude human beings, but I'm hardly an advocate of child torture. I knew that my days of leisurely napping and sleeping for eight hours at a time were going to be a thing of the past way before I was up at 3 o'clock in the morning feeding my baby. Sleepless nights are, arguably, one of the first things someone warns you about when you announce a pregnancy, so the exhaustion that accompanied motherhood wasn't surprising to me. However, when my son's pediatrician told my husband and I that our son was old enough to start sleeping through the night on his own, and the we should begin the process of sleep training, the notion of getting more than three hours at a time of sleep was as surprising as it was enticing.

Yes, as two new parents who had come to terms with the perceived fact that we would never sleep again, we were stunned when our child's doctor said that he was capable of sleeping 12 hours in a row. I mean, that sounded amazing, sure, but it also sounded too good to be true. I'm not a doctor though, so I decided to trust the pediatrician's advice and begin the sleep training process because I'm going to assume a pediatrician knows what they're talking about, and my pediatrician was talking about more sleep.

Our son was four months old when started letting him "cry it out." The first night wasn't as bad as we thought it would be. After we put him to bed, he cried for a few minutes in his room until I went in to check on him. I didn't pick him up or turn on any lights, but just spoke softly to him and rubbed his fuzzy little head. After being in his room for just a minute or two, I left. He cried for a few more minutes while my husband and I watched him on the video monitor, but he never seemed to be in distress. He just whined a bit. Before we knew it, he had fallen asleep. We stared at the monitor in disbelief, assuming that this was a fluke, and that it would be three more months until he would fall asleep that easily again. Thankfully, we were wrong.

The next night, the same thing happened. Then it happened again and again and again. Our son was sleeping in his crib for almost 12 hours at a time. That's not to say that there weren't times when putting him down to sleep was difficult and frustrating (trust me, plenty of nights, it was), but for the most part, he adapted well to his new sleeping routine, thanks to the cry it out method that my partner and I used.

Due to my personal experience, I was somewhat of an advocate for letting a child learn to soothe themselves and put themselves to sleep, and I sang the praises of our method every chance I got. While many mothers shared similar stories, some received my testament with sour faces. "How can you do that to your child?" they would ask me. "Don't you feel bad about just listening to them cry?" Sure I do. I mean, no one enjoys listening to their children cry, but I'm pretty sure no one enjoys feeling like an extra from The Walking Dead because they haven't slept in months, either.

I get that not everyone believes in "crying it out," or the science behind it, but for someone to insinuate that allowing my son to cry for a few minutes somehow equates to torture, completely off base. I understand that there are times when you shouldn't let your baby cry it out, but we were extremely attentive to our son during the entire process. When he was sick, we didn't just leave him there and cross our fingers. No, we picked him up and tended to his every need. We did the same when he was crying louder or longer than usual, or when he was in a new environment. Any time he seemed even slightly out of character, we took pause. Why would anyone find that to be tortuous?

I find it extremely offensive that anyone, even for a second, would think that I would allow my child to suffer. My kids are my world. When they hurt, I hurt more, and when they cry, sometimes I cry, too. I would suffer every day for the rest of my life if it meant that my children would never have to, but allowing them to adapt to putting themselves to sleep is far from something that I would consider "suffering." In fact, it allowed my son to get the rest he needed and allowed me to get the rest I needed. In turn, my son was able to experience a happier, healthier mother, which is not only something he needs, too, but something he deserves.

For us, letting our son cry it out was extremely effective. Both of our sons are amazing sleepers and, as a result, my husband and I are able to get some much needed rest, too. For the sake of all parents, I wish that every child slept as well as ours do, because it's beneficial for all of us, but I understand that sleep training and the "cry it out" method aren't for everyone. I just wish those who don't agree with our methods wouldn't go as far as to demean them, or insinuate that I am hurting my children purposefully and/or for my own gain. Like any other parent, I'm just doing what's best for my children, and myself.

More Like This
From Captions To Gifts, These Are All The Kindergarten Graduation Ideas You Need
Here’s What You Need To Know About That Viral 1960s Baby Formula “Recipe”
Gerber's New Spokesbaby Isa Has The Biggest Brown Eyes & Was Born With A Limb Difference
Ashley Graham On The “Fun, Organized Chaos” Of Raising Twins