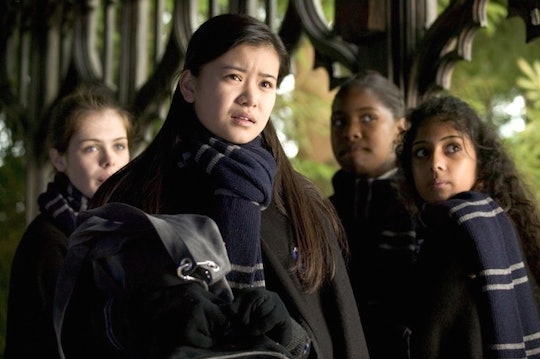 Confession: As a longtime Harry Potter fan, I've always just loosely identified myself as a Gryffindor because, well, Harry and Hermione (sorry, Ron). It didn't occur to me that there might be a more suitable house for me to identify with because, again, Harry and Hermione. However, I'm revisiting the series now and it's occurred to me that it might be worth it to dive in a little deeper. There are a number of ways to determine which Hogwarts house you belong in, from self-declaring to doing some reading and some researching and some online quizzing. While the original Pottermore Sorting Hat quiz is not currently online, there are plenty of replicas available, if that's your jam.

So despite my original assumption that I was a Gryffindor, lo and behold! In my case, the signs are now pointing to Ravenclaw. And like a throwback to my days as a loyal reader of Seventeen and YM magazines, I'm trying to figure out just what this result says about me, my personality, my life, my relationships, and what my crush is actually thinking. Should you be in the same boat, or perhaps you're someone who has a beloved Ravenclaw in your life, I thought I might break it down to one simple thing you can say to a Ravenclaw to make them feel awesome.

First though, we should get on the same page about what being a Ravenclaw actually looks for a 2016 Millennial, since let's be honest, that's a demographic that doesn't get a ton of page time in the series. In the famous song introducing all the houses, the Sorting Hat sings:

"Or yet in wise old Ravenclaw

If you've a ready mind

Where those of wit and learning

Will always find their kind."

I mean, could "wit and learning" mean being constantly online and absorbing all the headlines and pop culture and current events possible, and then making comments about it that are usually only interesting to me? OK, then yes, count me in. A ready mind? Sure, I guess, assuming I've had enough sleep which, let's be honest, I definitely don't get. But still, I think I get what Rowling is saying here: Ravenclaws are quick and curious and informed. I'll take it.

We're also quirky, a trait marvelously displayed by goddess Luna Lovegood (my personal hero, NBD). If being anything like Luna is wrong, then I most definitely don't want to be right.

The Pottermore Ravenclaw welcome letter really drives this point about uniqueness home, noting that "we think you've got the right to wear what you like, believe what you want, and say what you feel." Boom, can't argue with that.

With the traits of individualism and respect for intelligence and learning in mind, here's what you can say to a Ravenclaw to let them know you're in there corner.

It's so simple. Can we really reduce it that one simple thought? Yes. Yes we can. It's about appreciating their mind as well as their quirks, supporting their unique interests, and respecting their values of of reason and understanding.

It's probably the Ravenclaw in me talking, but I would argue that the world would be a better place if we were all able to do this. Easier said than done, I know, but it's not too crazy of a thought, right? I wonder what Luna thinks...

Good enough for me!

More Like This
The 20 Most Romantic Quotes From Friends
Adele’s Grammy-Nominated Album Features A Beautiful Song Written For Her Son Angelo
Marie Kondo Gives Up Tidying Post-Kids, Sparking Joy For Moms Everywhere
Julia Fox’s Apartment Tour Is Peak Mom Realness
What Parents Are Talking About — Delivered Straight To Your Inbox