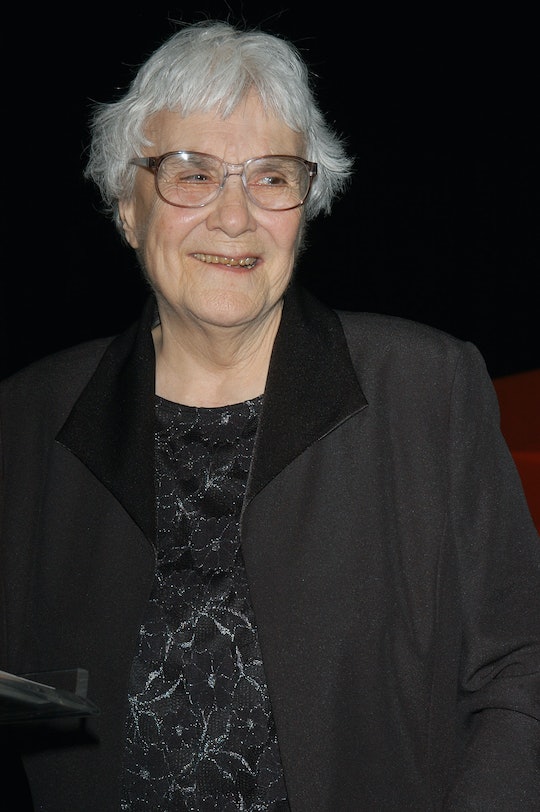 Harper Lee, the well-worded and mysterious author of To Kill a Mockingbird, died Friday at age 89, leaving a hole in the hearts of literary fans everywhere. Actually, Lee's reach extended far further than just to the bookish — you'd be hard-pressed to find a North American high school graduate who hasn't read To Kill a Mockingbird (or at least extensively SparkNotes-ed it). It's hard to find only one To Kill a Mockingbird quote that defines Harper Lee's legacy, because her writing touched people around the world in so many ways. The book shoved the Bible into second place on a "must read" book list, won Lee the Pulitzer Prize for fiction, and has inspired generations of law students with its strong characterization of lawyer and father Atticus Finch.

Whether you enjoyed middle-grade English or not, there's no denying that To Kill a Mockingbird accurately captured a number of tricky subjects that are still pertinent today. It wasn't just a coming-of-age story with well-crafted characters — it was an accurate snapshot of race relations and civil rights during the time of Jim Crow laws. The book was published in 1960 and revolved around events of the 1920s in a Southern town, but I think the true strength of Lee's storytelling springs from the fact that people around the world, years later, are touched by To Kill a Mockingbird's relatable and timeless messages.

The United States is still struggling with race and criminal justice — all you have to do is look at the headlines of the past few years to realize the country is still teeming with tension and calling for change. Why did the United Nations have to school the U.S. on racism and police violence in 2015? Why does the U.S. have the highest prison population in the world, with 20 percent of the world's prisoners despite housing only 5 percent of the world's population? Though the country has come a long way since Jim Crow, the U.S. still has a way to go to achieve the kind of country (and justice system) envisioned by Atticus Finch, which makes Lee's message just as strong now as it ever was.

But, personally, I think it goes beyond that. In To Kill a Mockingbird, main character Scout struggles with the way she treats her neighbor, Boo Radley. She watches her father, Atticus, unwaveringly attempt to do the right thing, not the easy thing. She lives in a world where there aren't easy answers, and where finding the goodness in people isn't always a simple task. These are challenges everyone faces in life, whether or not they have an opinion on race relations or criminal justice, whether they're coming of age, like Scout, or making difficult parenting decisions, like Atticus — which is why I think this is one of the best quotes that defines the legacy Lee left behind:

Courage is not a man with a gun in his hand. It's knowing you're licked before you begin but you begin anyway and you see it through no matter what. You rarely win, but sometimes you do.

I think it so perfectly sums up each generation's collective and personal courage. Whether that courage means protesting police violence, voting in the hopes to change a place you love, or getting up every day when facing depression, Lee leaves fans with the reassurance that their courage stems from their everyday decisions — from standing by their values despite how contrary the odds may seem.

Thanks for the reminder to fight the good fight, Lee.