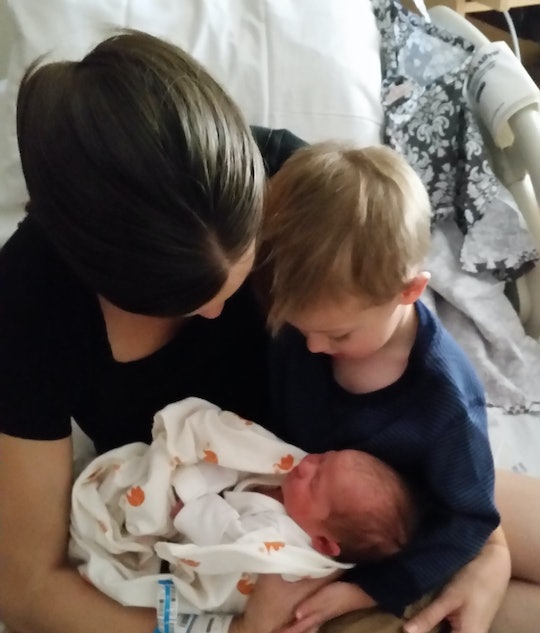 The One Way My Unmedicated Labor & Delivery Changed My Self-Confidence

Growing up, I had very low self-esteem. I had a happy childhood with loving parents and nothing to cause me to feel that way, but I did. And when I became an adult, I learned to hide my lack of confidence from everyone around me, but the voice telling me I was worthless was still there, loud as ever. When I got married, my husband did his best to build me up, but I still failed to see someone I liked in the mirror. Whenever we talked about having children, I prayed my kids would one day see me differently than I saw myself. I dreamed of being a mother, and I had plenty of love to give, even if I didn't love myself. Back then, I had no idea that an unmedicated birth would one day change my life and would give me not just a baby, but true a sense of self. I had no idea that one of the hardest days of my life would give me the strength and self-esteem I so desperately craved.

After years of trying to conceive, we were blessed with our first son. Two years later, our second son came along. With the help of an epidural, both my first two labors went quite smoothly. My oldest decided to come in the middle of a much-needed date night. My second birth was quite different. I woke up to intense pain at 3 a.m. and headed for the hospital. Timing my contractions in the car revealed them to be less than three minutes apart, so naturally my husband was a nervous wreck. After hours of painful labor, I begged for an epidural, but due to a nurse shift change it didn't arrive until I was dilated to a 7. The level of pain, prior to the medication, was so overwhelming that I told myself I'd never have an unmedicated birth if I could help it.

Following the births of my two sons, being a mom was the only thing I ever felt good at. I was complete... until I began to feel an overwhelming desire to add to our family. The thought consumed me until all I could talk about was having another baby in our family photos. My husband was against the idea of having another baby at first, but remarkably he reconsidered. Two months later, we were expecting a baby girl.

What felt like five minutes after I was looking at a positive pregnancy test, we were on our way to the hospital. But after being checked by the nurse and monitored for an hour, I was sent home. I was 4 centimeters dilated, so I was quite surprised to be turned away. I felt defeated, and sadly, even a stop at Burger King failed to make me feel better.

The following night, I had a sudden contraction that took my breath away. I knew instantly that it was time to meet our daughter. Less than an hour later, I was at the hospital begging for an epidural. Tears filled my eyes when my doctors told me I was still just 4 centimeters. And the tears continued when I learned that since I was less than 39 weeks, by four hours to be exact, there would be no medication until I labored an additional centimeter. With my two previous labors, I went into labor at 38 weeks gestation, and both times I had an epidural, but apparently the policy had changed.

With my chin to my chest, my knees in my hands, and my husband at my side, I gave one final push.

I contemplated driving to another hospital until I started vomiting uncontrollably. One hour of misery later, I heard those three glorious words I was waiting for: "You're 5 centimeters!" I was loaded into a wheelchair and wheeled down the hall. My epidural was ordered and an end to the torture was finally in sight, or so I thought.

I ignored the voice telling me I couldn't do it, and I did it.

As I entered the delivery room, my relief turned to panic when my contractions started coming one on top of another. With little to no breaks in between pushing, I started to wonder if my epidural would get there in time. "I can't do this!" I cried to the nurse while she struggled to get the IV in my hand. I'm nowhere near strong enough to do this without medication, I thought. God, please help me! I knew my husband felt helpless watching me and I heard that familiar voice again, the one telling me I was weak and destined to fail. "I'm going to die," I said, just as the nurse came to check my progress. I grabbed her arm violently and told her, "I need to push!" She didn't believe me, but I pushed with my next contraction.

My body was taking over whether I wanted it to or not. I knew the nurse was wrong. My daughter was coming right now and I was going to prove it to her. I felt my water break with my first push. What a relief, I thought. Knowing I was right was empowering. I felt brave all of sudden, trusting in my body, listening to its cues. I was ready to face the pain head on. As water started to gush out of me, the nurse frantically grabbed her intercom. "I NEED NICU IN HERE STAT, AND BRING THE DOCTOR!" she ordered. Finally, I thought, we're on the same page.

I looked down and panicked when I saw green, murky liquid all over my bed. "What's wrong?" I asked, but the nurses were too busy rushing around my room trying to quickly prepare my bed for labor. "Your baby pooped in the fluid," a nurse finally told me. "We need to get her out!" And it was time to push again. In a state of shock, I turned to look at my husband. He looked pale. I felt confused, defeated, and ready to throw in the towel. All that bravery I'd felt just moments before had disappeared. Frankly, I just wanted to give up.

The pain was too intense to focus on anything else. I screamed and thrashed back and forth. "Look at me!" one nurse said, grabbing my shoulders in an attempt to calm me down."If you're going to do this, you need to focus and do it right." Then she added: "Push!" So with my chin to my chest, my knees in my hands, and my husband at my side, I gave one final push. I ignored the voice telling me I couldn't do it, and I did it. Three hours from the time I'd walked through the hospital doors, my beautiful daughter was born. Her cry was the most beautiful sound I'd ever heard.

If I forgot the pain, then I would've had to forget how I fought my way through it. I would forget the triumph, the pride, and the joy I felt.

They placed her tiny body on my chest, and suddenly, I was free. She looked up at me with her beautiful brown eyes, and I realized someone new was staring back at her. Not only was I now a mother of three, I was the mother I'd always prayed I'd be. I was strong, brave, and confident in who I was. I was ready to take on the world. Because of the unbearable pain I felt in birthing her, I felt strong. Because of the overwhelming fear, I felt brave. The voice telling me I was weak vanished. I was a woman who, for once in her life, believed in herself.

For a while after her birth, I was haunted by the events of the day. I was scarred by the pain, fear, and confusion I felt. I wanted to forget the immense pain and never look back. Until, something miraculous happened: I realized that what I'd gone through and what I'd felt had somehow changed me. I didn't want to forget anymore. If I forgot the pain, then I would've had to forget how I fought my way through it. I would forget the triumph, the pride, and the joy I felt. And I definitely wanted to remember that.