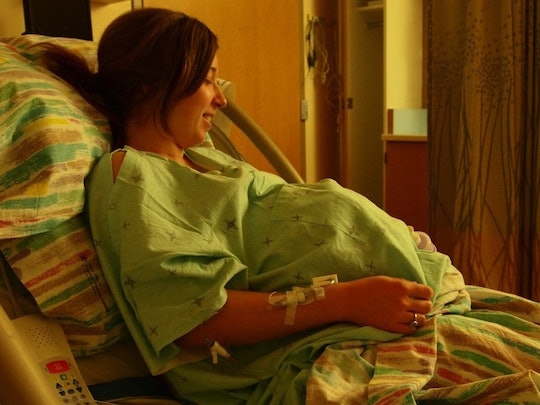 The Real Reasons Why I'll Never Regret Getting An Epidural

Like all the women in my midwife centering group, I wanted to have a “natural,” unmedicated birth. It was a large part of why I decided to partner with a midwife instead of an OB-GYN for my third and final birth. I wanted to know my desire to go without unnecessary intervention would be respected, and after a scary first birth where my birth plan was completely ignored, I felt I'd get the support I needed with a midwife by my side. I wanted to see what my body was capable of without the aide of Pitocin or an epidural (both of which I had been subject to with my previous births). This was my last chance to get the birth experience I had always wanted: a birth without an epidural.

My previous experiences with epidurals and birth in general were not what I'd hoped for. At all. My first was traumatic as hell, as hospital staff pushed me into early labor through invasive interventions. My water had been broken forcefully, I was drugged out on Demerol and still writhing in pain from Pitocin. I was bullied into everything up until that point, but I begged for an epidural. I wanted anything to stop the pain. Then, as soon as I got the epidural, I kept telling everyone around me that I needed to lay down. I was dizzy and nauseous. I vomited onto my hair and hospital pillow before blacking out. I woke to a room full of hospital staff, my mother and husband crying over me because my heart rate and the baby’s had dropped so low it seemed certain one of us was going to die.

Then, for all that horror, the damn epidural wore off while I was pushing hours later. I still felt the most terribly painful part of birth in all its “ring of fire” glory — with an unmedicated episiotomy to boot. I swore I would never have another epidural again (or another baby, but that’s a whole different sort of story).

When we finally decided to move to the hospital, I was already talking about getting an epidural in the car. The pain was just too much for me.

During my second delivery, when my daughter was born, my labor was progressing slowly and again, the hospital staff pushed Pitocin on me to hurry things along. I knew how painful the contractions would become once they were in motion, so after much deliberation with the staff caring for me, I decided to try another epidural. The anesthesiologist was very attentive to my fears and stayed with me to make sure all went well afterwards, and it did. My daughter’s birth was easy from that point forward, and she was out after a mere 12 minutes of (still fully medicated) pushing. Even though it was a wonderfully easy birth, I still felt a pang of regret looking back, wishing I would have had the chance to labor unmedicated.

When my son and my daughter were born, I felt like I'd given birth to two babies and still didn’t really feel like I'd ever really experienced birth. The Pitocin and epidurals so early on in my labors made me give up control what happened next. Once these things were in motion, I was tethered to my hospital bed, unsure if what I was feeling was a result of the birthing process or a product of all the medication in my system. It wasn’t what I'd always hoped my births would be like. It wasn’t even close. Sure, I ended up with healthy babies in the end, but I felt cheated in a way. I hadn’t experienced my body in its most raw and natural state — and I wanted that.

I had made it all the way up to the finish line, and needed that epidural to help me cross that threshold. During my third birth I was able to focus as I pushed, and felt more present for my birth because of my epidural.

So with my third baby, I decided to stay at home and labor for as long as possible or until my water broke. To be honest, I was really holding out for my water breaking (another experience I never had). I went into labor on my due date, and stayed home as long as possible, wondering whether I was really in labor or still having horrific gas pain from all the jalapeño poppers I ate to induce labor. Still, I waited out the pain as long as I could, taking hot showers, watching Game of Thrones, and texting friends until it was undeniable that I was in hard labor. When we finally decided to move to the hospital, I was already talking about getting an epidural in the car. The pain was just too much for me.

Even though it was something I hadn’t wanted, I didn’t feel robbed of any part of the birthing experience. I had pushed my first son out after my epidural had worn off. I knew that hellish pain. Now, I knew the rest of it too.

However, my midwife helped me through my contractions far better than my husband was able to at home. I labored without medication, in any position I pleased, for a few hours as things moved along. Still, when I was at 9 centimeters and on the home stretch, I asked for an epidural. My husband and midwife tried to talk me out of it, afraid I'd have regrets again, but I stayed adamant. I got the epidural just in time, and less than an hour later, I had my third and final baby.

For the first time in my three deliveries, I'd really felt my labor and worked through it. I had made it all the way up to the finish line, and needed that epidural to help me cross that threshold. During my third birth I was able to focus as I pushed, and felt more present for my birth because of my epidural. Even though it was something I hadn’t wanted, I didn’t feel robbed of any part of the birthing experience. I had pushed my first son out after my epidural had worn off. I knew that hellish pain. Now, I knew the rest of it too.

I realized what I had wanted most out of my birthing experiences was to feel like I was in control. Going through most of my birth unmedicated was enough for me. Knowing when I wanted the epidural was a powerful moment, not a moment of fear. It helped me enjoy my last birth, and I will never regret it.