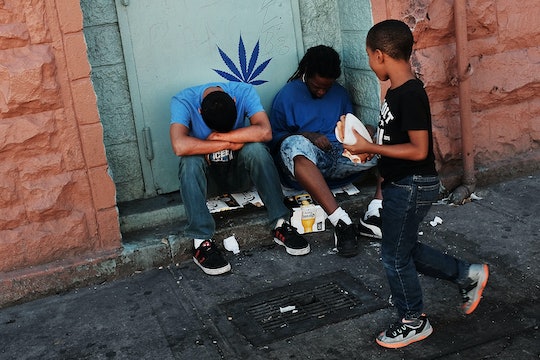 The Opioid Crisis Is Affecting Kids Across The US

During his Senate confirmation hearing for FDA commissioner this week, physician and entrepreneur Scott Gottlieb said that the agency had been “complicit, even unwittingly” in fueling the nation’s opioid epidemic. He added that addressing the crisis would mean treating the rising incidents of opioid abuse like a public health emergency on the scale of an Ebola or Zika outbreak. The recent spike in painkiller- and heroin-related deaths is certainly alarming. And new data shows that the opioid crisis is beginning to affect more kids, as more children and teens become addicted themselves. So why aren’t we doing more to fight prescription drug addiction? How we think about drug use and addiction may actually be part of the problem.

The scope of the problem can’t be overstated. With prescription painkillers like OxyContin, Percocet and Vicodin becoming more common in American households, it’s far easier for children to come in contact with opiates than many other drugs, according to a Chicago Tribune report. An average of 12,000 children and teens ingest prescription painkillers inappropriately each year, according to the Centers for Disease Control. A Yale study confirmed those statistics, documenting a 205 percent increase in drug poisonings among kids under 4 and a 176 percent increase among teens age 15 to 19.

And while some of those cases — especially in the youngest children — were accidental exposure, Yale biostatistics researcher Julie Gaither told the Tribune that many others were cases involving abuse of legitimate prescriptions in older children. Cleveland addiction specialist Dr. Jason Jerry explained the pathway to addiction to New York Times health reporter Benedict Carey in a 2014 interview: prescription drugs like oxycontin and fentanyl introduce the sedation-like high of heroin use, and when the pills are no longer available, people turn to harder substances to recreate the feeling.

Often it’s a legitimate prescription, but next thing they know, they’re obtaining the pills illicitly. [...] People eventually say ‘Why am I paying $1 per milligram for Oxy when for a tenth of the price I can get an equivalent dose of heroin?

That’s why hearing Trump’s FDA nominee acknowledging the agency’s role in the opioid crisis is important. The FDA, as the government agency that oversees how prescription drugs are approved and made available to patients, approved the use of OxyContin in teens in 2015. Gottlieb said that FDA officials “didn't fully recognize the scope of the emerging problem” several years ago and that, under his leadership, we could expect to see a new, larger strategy to combat opiate addiction, according to The Washington Post.

The GOP-controlled Congress might be the biggest barrier to large-scale investment on dealing with opiate addiction, though. The irony is that the Republican-run Congress blocked taking the kind of dramatic action on Ebola and Zika that Gottlieb referenced in his testimony, and they seem poised to block evidence-based intervention on opioids as well. The health care package introduced by House Republicans last month would have slashed CDC funding and cut health coverage for millions. President Trump’s budget proposal took things a step further by gutting funding to the NIH and the CDC by as much as 20 percent.

The NIH and the CDC are on the front line of the nation’s ability to research and respond to diseases — including (in a further bit of irony) research on effective treatment for opioid-addicted kids.

Until very recently, the prevailing idea when it came to drug abuse was that marijuana use led to the use of hard drugs. But research has shown that simply isn’t true. For many users, addiction is more likely to begin in the family medicine cabinet. And not only are more people with children suffering addiction, more young people are abusing opioids themselves. For all those reasons, Gottlieb’s call for a more “dramatic” approach to dealing with prescription drugs has merit. But will it go anywhere? Until we have an answer, the nation's addiction crisis is only getting worse.