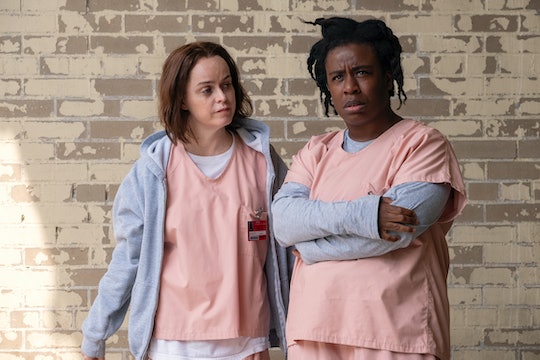 When Orange Is the New Black premiered on Netflix six years ago, it ushered in tons of other quality programming from a streaming platform that hadn't quite hit its stride yet. Now, the show is coming to an end and the Orange Is the New Black Season 7 trailer is here to get you ready for the end while making you cry like a blubbering mess.

The trailer for the final season combines comedy, drama, and touching moments, much like the show has done over the past six seasons. So just in case you thought that Season 7, which premieres on Netflix On July 26, would lean on the more lighthearted fare to close out the women's stories, think again.

When Season 6 left off, Piper and Sophia were released from prison early, effective almost immediately, and Blanca, who was under the impression that she too was getting out, was instead redirected to an ICE prison where she would presumably stay for the foreseeable future. It was a wild turn of events that left their futures hanging in the balance and viewers unsure of where they would all go next. And, of course, what this meant for the prisoners who are still serving the remaining days of their own sentences.

In the Season 7 trailer, you see all of your favorites who are still in prison jumpsuits — and the few who no longer have to sport the cheap polyester that had plagued them for years. Piper is trying to start her new life outside of prison and find her way. From the looks of it, she is having an easier time finding employment and getting on track than Aleida did when she was released from prison in Season 4. But Piper is still finding it difficult to re-enter society after several years behind bars.

The trailer also shows Taystee arriving at the same maximum security prison where Suzanne and Tiffany have become comfortable on their cell block. After Taystee was framed and tried for the murder of former CO Piscatella last season, she now has to adjust to more time behind bars and what her life will be like with no freedom in sight.

The trailer also gives fans a glimpse of Sophia out of prison and working at a salon, so at least there is some light at the end of the tunnel for her. And Gloria seems optimistic about getting through the next chapter of her life with her fellow inmates and closest friends. I'm not sure how much time the rest of the characters have on their sentences at this point, but since some of the women had been serving them long before Piper came into the picture at the start of the series, there's a good chance we could see more inmate releases by the end of the season.

In a perfect world, Orange Is the New Black would end with a flash forward so viewers could see how everyone's stories end and at least give some semblance of a happy ending to them. Piper might also finish the memoir she began before she was released, which was obviously a callback to the real life memoir by Piper Kerman, which was used as the inspiration for the series. I might be asking for a lot in the way of happy endings, but these women have been through a lot on Orange Is the New Black and now that the end is near, they deserve a little hope for the future.