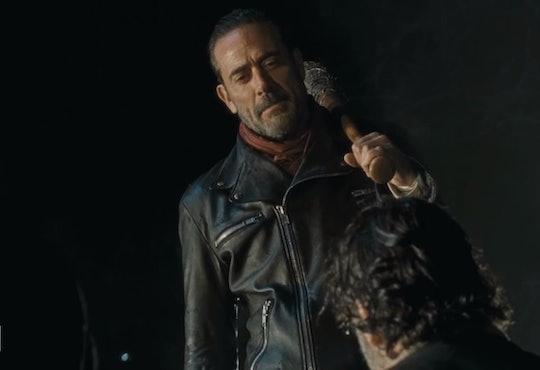 The Parents TV Council Thought ‘The Walking Dead’ Premiere Was Too Violent... Wait, What?

Gentle reader, please be sure to sit down, because I'm about to drop some shocking truth bombs. Ready? Water is wet, the sky is blue, and the Parents Television Council says The Walking Dead Season 7 premiere was too violent. Take as long as you need to process that. If this is your first time ever ingesting any form of media, allow me to elaborate. The Walking Dead is a show based on a series of comic books that takes place during the zombie apocalypse. In the absence of any sort of law or order, some humans resort to violence. (Warning: this post involves major spoilers from Episode 1 of The Walking Dead Season 7.)

Drilling down further, the Season 7 premiere featured the gruesome deaths of two fan favorites. Newcomer Negan (Jeffrey Dean Morgan) introduced himself to the group and asserted his authority by bludgeoning Abraham (Michael Cudlitz) and Glenn (Steven Yeun) to death with his trademark weapon, a baseball bat wrapped in barbed wire called Lucille. Although the identities of the victims were kept secret leading up to the airing, nothing else about the episode was surprising in the least. The scene was nearly identical to the one that played out in Issue 100 of the comic book over four years ago, right down to Glenn's left eye popping out.

The casting of Negan was announced almost one year ago, and he made his debut during the Season 6 finale in April. In fact, viewers even saw the beginning of Abraham's murder in the finale, although it was shot from the victim's point of view to obscure his identity. It was an undisputed fact that the premiere would show at least one person being beaten to death, by Negan, with Lucille. Even a first-time viewer would have known this, as it was very heavily advertised throughout the summer. So what's the PTC's problem? Did they think Negan was just smashing watermelons with that bat?

The real issue doesn't seem to be about The Walking Dead at all; PTC president Tim Winter admitted to The Hollywood Reporter that he hadn't actually seen the whole episode in question, and his claim that the show uses violence as a crutch in place of storytelling is all the proof fans need to know that he's wholly unfamiliar with the series. Abraham and Glenn's deaths, and the threat of more violence, were used to illustrate group leader Rick Grimes' (Andrew Lincoln) loss of control, and how Negan reduced him to a shell of his former self by using his love for his adopted family against him.

So what's this really all about? It's a pitch for cable unbundling. While Winter specifically calls out The Walking Dead's "graphically violent" premiere as being "harmful, especially to children," surely he knows full well that no parent in their right mind allowed their young children to watch it. But his statement quickly pivots as he claims that "It’s not enough to 'change the channel,' as some people like to advocate, because cable subscribers – regardless of whether they want AMC or watch its programming – are still forced to subsidize violent content."

By the same token, I, an AMC watcher, am forced by my cable provider to "subsidize" certain networks that teach that "historical figures" Jesus Christ and Santa Claus were white, but guess what? I've found a way around that. I just don't tune in to that channel. Not ever. My son, who's known how to operate a remote control since before he was potty trained, will never see any objectionable content on those networks or channels (or AMC, for that matter), because cable boxes don't randomly jump to channels that viewers don't select. And yes, it's a bummer that I have to pay for a channel I object to, but we don't get to pick and choose, just like we don't get to decide what our tax money is spent on. The Parents Television Council would do well to remember an oft-repeated lesson that all parents know by heart: Life isn't always fair.