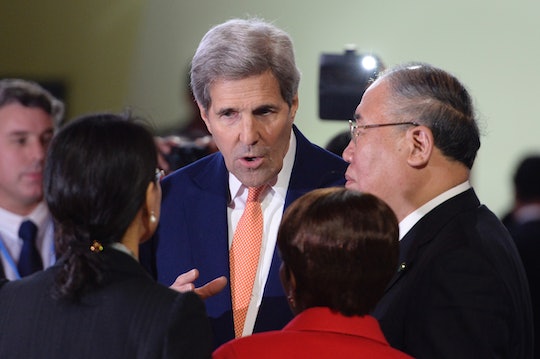 The Paris Climate Agreement Has Been Adopted, And, As Obama Says, “This Is Huge”

Representatives of 195 countries have finally come to an agreement and adopted the Paris Climate Agreement Saturday. Now it's just up to each individual delegate to head back and have their home countries pass the legislation. President Obama tweeted right after nearly 200 countries opted to adopt the agreement that "this is huge," and it is. But it's also just the very, very beginning of the process.

According to The New York Times, it was a "tense morning" when the final draft of the document was delayed. Once delivered, delegates got down to picking it apart for language they could all agree on before voting. Foreign Minister Laurent Fabius of France appealed to representatives to pass the act Saturday, saying it was the best possible version:

Our text is the best possible balance, a balance which is powerful yet delicate, which will enable each delegation, each group of countries, with his head held high, having achieved something important.

There was a lot of compromise that went into the final draft, but the final version requires all signing countries to dedicate themselves to peaking greenhouse gas emissions, lowering the global temperature to 1.5 Celcius, and donating up to $100 billion a year by 2020 to developing countries to join the cause. They also have to return every five years to renegotiate the law.

Not everyone is thrilled with the negotiations. And Congress will certainly be battling the finer print before passing the law. Bernie Sanders said today that it's not enough.

While this is a step forward it goes nowhere near far enough.The planet is in crisis. We need bold action in the very near future and this does not provide that.

On the other side of the aisle, Republicans aren't thrilled about peaking greenhouse gas emissions or adding anything else to the budget. Or admitting that climate change is even an issue. Whatever side you choose, the biggest news today is that almost the whole world has finally (sort of) agreed on something today.