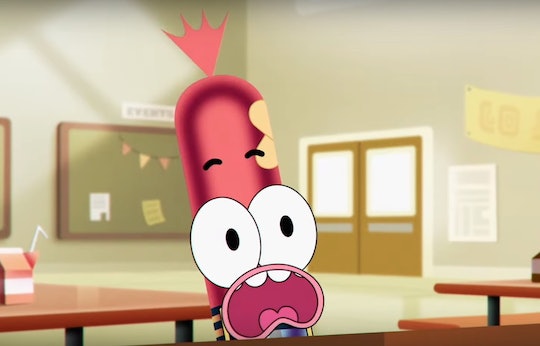 When it comes to Netflix, kids have it easy. I feel like I wait ages for a new season of Stranger Things or Orange Is the New Back, whereas kids get to see new seasons of their favorite animated series pop up multiple times throughout the year, like Pinky Malinky, which only just premiered on Netflix in January. Maybe it’s easier to churn out 13-minute episodes of cartoons. I just wish it were that easy to get new seasons of my favorite shows. And the Pinky Malinky Season 3 episodes prove that the talking hot dog kids have come to know and love would have been worth the wait, had kids been forced to wait longer than a couple of months.

Season 2 premiered back in April with a batch of 15 new episodes and then in June, Netflix dropped a double episode to give fans another taste of the show before Season 3 premiered on July 17. Season 1 introduced young viewers to the title character who happens to be a talking hot dog, despite no one else in his family having the same mutation that he calls genetic. They watched him navigate his small town and junior high with his best friends in tow and Season 2 showed how the well-meaning Pinky learns from his mistakes and teaches others about theirs.

Now, Season 3 is here to bring more laughs and continue his adventures in the fictional town of Sackenhack.

One of the changes fans might notice this season is all of the ways Pinky distorts his body to fit the scenario. So if you’re not put off by Pinky stretching his hot dog body around a bear to save his friends or peeling his face off to reveal an identical one underneath, then you’ll probably love where Pinky Malinky goes in Season 3.

That’s not to say that it’s a far cry from the way he has been portrayed before. In the first two seasons, Pinky lost the top of his hot dog head, showed what the inside of a hot dog looks like, and shot cats out of his mouth. Pinky Malinky definitely isn't about sticking to realism, but that’s probably what kids love about it. And I wouldn't expect any realistic or serious moments from a show about a talking hot dog.

Pinky Malinky is the animated docuseries that you never needed, complete with fake viral videos thrown in and Pinky’s commentary on life as a junior high schooler whose main goal is to gain fame, popularity, or a little of both. Preferably both. If you’ve never watched Pinky Malinky before or just skimmed the show while your kid went through the entire first season in one sitting, it’s one of those cartoons that is about making the audience laugh, maybe including a life lesson or two, and having a happy ending at the end of each 13 minute episode.

And if you ever *have* watched The Amazing World of Gumball, then it should come as no surprise that Chris Garbutt and Rikke Asbjoern, who worked on the Cartoon Network series, also serve as the co-creators of Pinky Malinky. The humor in both shows is similar and it's enough to grab and hold the attention and older and younger viewers alike. Right now, it's unclear if this batch of Pinky Malinky Season 3 episodes is the last to come for a while, but I see these first three seasons being released in the first half of the year as a good sign of things to come.

Pinky Malinky was brought on Netflix as part of Viacom’s studio model strategy to give a home to shows that might not work on network television, but could on a streaming platform. So far, Pinky Malinky seems to have found a permanent place among other Netflix Originals, and I think there’s a good chance that there will be more seasons to come.