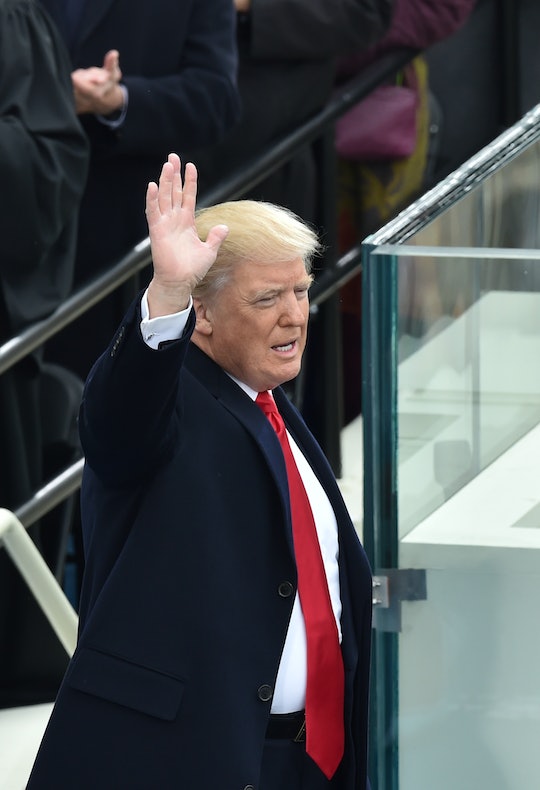 A lot is about to change now that President Donald Trump has been sworn in as the 45th president of the United States, but one change has already happened — at least on Twitter. That's because the POTUS Twitter account has been transferred to Trump, after being created in May 2015 for former President Obama and used for the remainder of his presidency. Trump has already proven himself to be a prolific and powerful Twitter user, often choosing the social media channel as his preferred way of sharing his opinions with the public. But will he actually use the POTUS Twitter account now that it belongs to him?

According to TIME, as president, Trump now inherits Obama's @POTUS account, along with its more than 13 million followers. As the first sitting president with a Twitter account, Obama used it to share messages with the American people on social media (another account @BarackObama, was controlled by his staff). But with the inauguration of Trump as the country's new leader, the account has been wiped clean, and Obama's messages have been transferred to a new account, @POTUS44.

According to The New York Times, Trump has already tweeted again from his personal account after being sworn in, while the @POTUS account remains tweet-free for the time being. That could signal that the presidential Twitter handle may be used only by his team at the White House (according to BBC News, the @POTUS account may be used only for official business), or possibly even not used at all. But it's not just Obama whose lost his Twitter account today: all of the presidential accounts were actually switched following the inauguration.

According to Fortune, first lady Melania Trump has now taken over the @FLOTUS handle from Michelle Obama, and Vice President Mike Pence has also taken over former Vice President Joe Biden's account, @VP (Pence is currently the only one who has actually tweeted, however). As for the original followers of the accounts, it appears that they have automatically be transferred to the new accounts created on behalf of Michelle and Biden — @FLOTUS44 and @VP44, respectively.

If you were a follower of the Obamas under their original accounts, it does kind of seem kind of sad now to see the baton being passed to the new administration. But it doesn't sound like it will be the end of the Obamas on Twitter — they recently announced that they will be continuing their work as part of the newly formed Obama Foundation. And, of course, judging by Trump's penchant for tweeting, it's also pretty likely that we've only just begun to see what the impact of his social media use will actually be as he begins his term as the country's 45th president.