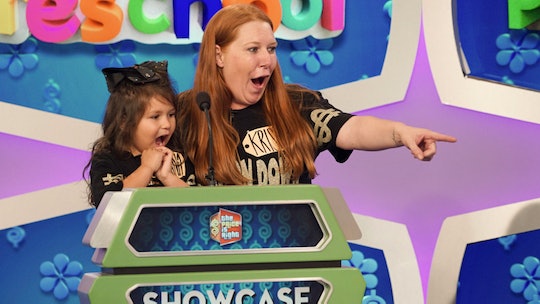 Keep calm and come on down. The Price Is Right Kids Week has officially begun for the second time in CBS history, and it's just as adorable as ever. The hit game show started Kids Week on Apr. 22 and it is expected to run until the 26th. Every day, each new episode will feature a new school-aged group, from preschool children to college kids. In an exclusive clip for Elementary School Day, which airs on Tuesday, Apr. 23 at 11 a.m. ET, a mother and her child, Elias, play The Price Is Right's version of tic-tac-toe to win some pretty phenomenal prizes.

As soon as the clip for The Price Is Right Kids Week begins, audiences will be filled with joy. The duo make their way on stage and Elias immediately runs up to host Drew Carey and hugs him. "I love this show," Elias exclaims mid-hug. The clip then shows that the big prize for winning is the ultimate slumber party, filled with a new television, snacks, and a bunk bed. "Uh...yes," Elias screams. Same. So what does the kid have to do to get the big prize? Win a game of Secret "X", in which three of the six spots are mysteriously predetermined.

The mother and child are able to get two X's on the board by guessing the price to a My Little Pony toy set, but they fail to guess the Hulk action figure correctly. However, they still have one shot to win the slumber party prize. Just as the predetermined spots are about to flip over... the clip cuts out. I guess you're going to have to tune in to see what happens.

Whether or not The Price Is Right contestants win or lose, the experience will last them a lifetime — and hopefully, without any tantrums in the process. In an interview with TV Insider, executive producer Mike Richards revealed what while he was initially worried that some of the younger kids might take losing badly, there were luckily no tears on set.

"For sure, a couple of the preschool kids are disappointed their parents didn't win, and that's funny. Funny disappointment, not sad," Richards said.

Now, The Price Is Right Kids Week doesn't end with the Elementary School episode. Per CBS, the rest of the Kids Week will feature children who are in middle school, high school, and college. And audiences are in for a treat. Still speaking to TV Insider, Richards explained that middle school students have been some of the best contestants the show has ever had.

"The middle school kids are some of the best at bidding that we've seen, and I don't mean just in Kids Week," Richards said.

Richards also added that there is real motivation when it comes to Kids Week players, especially since each prize is tailored to the age group.

"If you're a high schooler, you want electronics. And so we went crazy with the latest video games, virtual reality bikes," Richards said. The EP then shared that Friday's college special will give contestants free books for a year.

"It's like, 'What makes your life better?' Nobody really wants to spend money on books. I get it, I was in college," Richards said.

The Price Is Right might be the longest-running game show in television history, but it's fresh specials like Kids Week that keep things interesting. So come on down and enjoy the show.