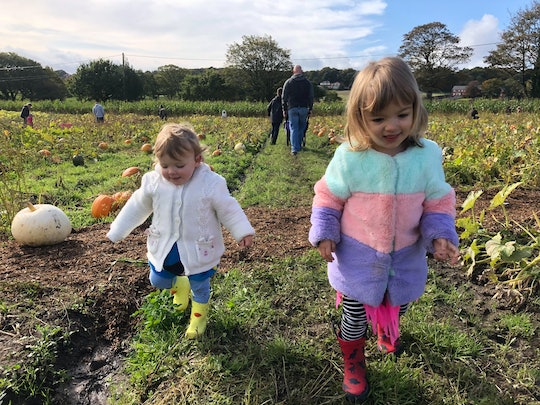 Your life's trials will only become more pronounced when you take your kid to a pumpkin patch soon, on a crisp October Saturday, intent on pocketing the perfect snap of your babies among some pumpkins. Upon arriving, you may notice that every other parent and carer within a 30-mile radius seems to have had the same idea as you. Motivated by the thought of an adorable 5x7, ready-to-frame snapshot of their kid(s) sprouting from the ground like a special varietal of seasonal gourd, parents have made the trek to the nearest field. And it is here, amidst the ensuing chaos of dozens of tykes trying to find the biggest pumpkin on the farm, that you will wonder why these people can't just get out of the way while you, too, try to capture your own magical photo.

All you want is a memory to last a lifetime, after all. Welcome to the pursuit of the great pumpkin patch photo.

The thing is that most of the time other people, too, are following their kid(s) around the place with a camera at the ready. You never know when your child is going to suddenly fall in love with a green, or orange, or white pumpkin. You never know when their eyes will brighten at the thought of taking it home to decorate, or eat, or try to kick around like a soccer ball (RRP: $50). You need to be prepared, so you arm yourself with that camera and trail your babies with the energy of someone who has never known the debilitating nature of parental sleep deprivation or been bait-and-switched an apple cider in place of an honest-to-god coffee.

Do I wish they could find it in their child-free hearts to move out of the damn way when I'm clearly trying to take a hilarious and wholesome picture of my daughters running towards a pumpkin twice their size? Oh, yes, I absolutely do.

Of course, sometimes people on the patch aren't there with children, and have been drawn by some other harvest-related passion. Maybe these childless kooks want to make a pie out of their prized gourds. Maybe they want to deck out their homes in the spirit of the season. Maybe they just want to enjoy some fresh air and the hot chocolate sold at the side of the field. I don't blame them. A progeny-free trip to the pumpkin patch sounds wholly relaxing — hell, I wish I'd done more sh*t like that when I had the chance. But do I wish they could find it in their child-free hearts to move out of the damn way when I'm clearly trying to take a hilarious and wholesome picture of my daughters running towards a pumpkin twice their size? Oh, yes, I absolutely do.

There is, quite frankly, no proper etiquette for these situations. I personally never want to be the d*ck who interrupts another person's fun day out on the pumpkin field to holler "SORRY MY SON WILFORD HAS HIS EYE ON THAT KNOBBY PUMPKIN THERE — WOULD YOU ALL MIND TAKING FORTY STEPS TO THE EAST?" whether they have kids with them or not. After all, what makes my desired photo shoot any more important than the pictures they want to take? (A: The fact that my child is in it.) What makes the space any more mine than theirs? (A: The fact that we sacrificed a proper breakfast for the see-sawing blood sugar levels that come with granola bars consumed in the car seat.)

Getting everyone to look at my partner at the same time was a feat comparable to terraforming Mars.

Theoretically, at least, the space is everyone's to enjoy, even if it means coming to terms with the fact that some of those people will be forever in the background of your special family photos, wiping cow pats off their wellies — unless your day out is in the middle-of-nowhere, which is not a destination most kids have the patience to get to.

Added to which, I have found that almost every time I manage to snap a pic of one of my kids looking amused or fascinated, the other is having a melt-down. There were a few rare shots of my daughters and me together, but most were shot from behind because getting everyone to look at my partner at the same time was a feat comparable to terraforming Mars. There were others where I managed to get one kid's face while obscuring the other. There's even a video of my youngest freaking the f*ck out because she can't carry the most giant of gourds, because she has no sense of her own size or strength as of yet.

Amongst them all are one or two traditional gems. Photos featuring both my girls (neither of whom is crying buckets), with plenty of pumpkins in sight, and absolutely no random humans. I consider them "gems" because of how frikkin difficult it was to get them — but, funnily enough, when I look back at the dozens of images from this year's trip to the patch, it's all of the others that warm my heart. The messy ones, the funny ones, and even the ones full of unknown passersby. In their imperfection, they have captured one of the nicer truths of raising little ones — things won't always be pristine, or easy, or cute, and they'll frequently heave downhill like a runaway train, but they'll always be an adventure.

More Like This
30 Easy Summer Activities For Kids That Work Rain Or Shine
The Covid Vaccine For Kids Under 5 Has Been Sent To The FDA For Review
Should Parents Consider Delaying Covid Vaccines Until Closer To School Starting?
How To Properly Clean An Inflatable Pool