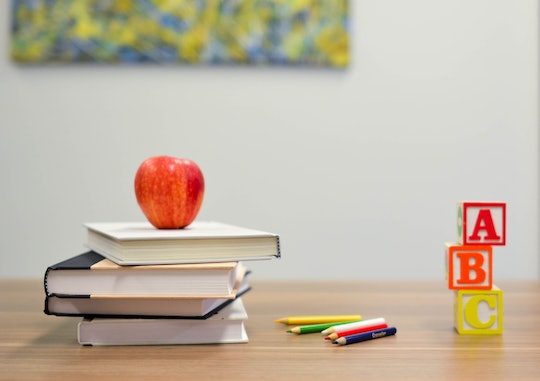 Ugh, This Racist Letter A Daycare Received Is So Gross

Sometimes it feels like every day, the world gets a little more terrible. Although the "grown up" world has its fair share of problems, there are some spaces that should remain totally conflict free. Like the daycare centers parents drop their kids off at every morning. Alas, even those spaces aren't safe from hate and racism. Take the racist letter this daycare center in Pennsylvania received this week, demanding that it fire an employee because she was "too dark."

An alleged employee of the daycare center tweeted an image of the letter that was sent to the Bridge 2 Creative Learning Center in Whitehall, Pennsylvania on Tuesday. Her account has since been turned private due to alleged threats she received after sharing an image of the note, according to Raw Story, but police are on the case of trying to track down the sender of the note.

According to The Morning Call, Dominique McKelley, the owner of the center, received two identical letters this week with no return address. There were two copies, one addressed to the center and one addresses to the black employee. The letter writer alleged that they were writing only in the name of "Making Daycare Great Again" and urged the owner of the center to fire the woman as soon as possible because her skin color was not "the first thing a child or parent" wanted to see in the morning.

Luckily, the daycare center isn't backing down. Although tracking down the sender of the letter may prove difficult, police have been called into investigate and extra security measures have been taken to ensure both the children's and staff's safety.

Whitehall police Chief Michael Marks told The Morning Call that he had never seen something "so offensive" in his 20 years on the job. “It’s disturbing. This is not something you want to see in your community. This is something we as a police department are going to take very seriously," he said. There haven't been any other related incidents in the area, so it might be hard to figure out where the letter came from.

McKelley doesn't think that it came from any family at the center, despite the fact that the letter alleges that some of the parents were considering pulling their children from daycare because of the African American employee. McKelley said of informing the employee about the threat:

I didn’t want her to have to read something like this. She started crying. She looked scared. She said she was going to quit. But I convinced her to stay. This has gotten everyone here so fired up. To see that look on her face when she read it … it just gets to you.

McKelley wrote on Facebook that the center thanks its families and communities for their solidarity:

We know this is not a staff or family attending our center. We are all very close including the awesome families that come to our center. This is some loser that needs to be brought to justice for the ignorance they feel is ok to spew. I want to assure our families that I have taken all precautions but I really think they already know that.

Just in case you needed a reminder of how divided the country has actually become, there are people on social media claiming that the letter is a "hoax" crafted by liberals. Fact checking site Snopes and other outlets have confirmed the veracity of the letter with the daycare center and local police. Romper's request for comment wasn't immediately returned.

Hopefully the staff and community around the daycare center stay safe and strong with the onslaught of hate coming at them — first from the letter writer, and then from bullies on social media questioning them for speaking out.