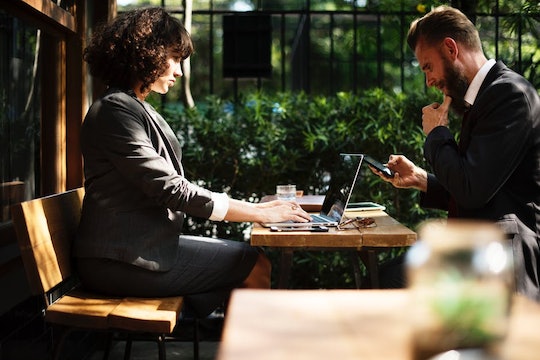 Turns Out, The Wage Gap For Millennial Women Is Actually Getting Worse

Here's some horrible, awful, very bad news, everyone: The wage gap for millennial women is getting worse. That's according to new data from the Bureau of Labor Statistics, which show that, in 2016, women between the ages of 25 to 34 earned earned 89 cents for every dollar a man raked in. Indeed, that is very bad news. What's more, it illustrates that millennials are actually on a backwards trajectory because in 2011, the ratio was reportedly 92 cents to $1.

Because millennials are highly educated and have more education and greater access to jobs than other generations, it's a troubling development that Fortune's Keshia Hannam noted is also "unexpected." So, what, exactly, is going on here?

Well, the first explanation for the sudden widening of the void between women's and men's paychecks actually has more to do with men than it does it women. Namely, their earnings had dipped in previous years. Now, though, Economic Policy Institute senior economist Heidi Shierholz told Bloomberg they're doing better. Also, women are more likely to be employed in less lucrative industries, lag behind men in securing roles in STEM occupations — which include roles in science, technology, engineering and mathematics —and tend to have less job experience than men, according to Fortune.

And the wage gap is pervasive as heck, with the earnings Hollywood's highest paid actors dwarfing that of its most well-compensated actresses by two-thirds.

Another culprit behind the wage gap that persists for young women is the one that probably also brings them a lot of joy: starting a family. In the United Kingdom, for instance, where men earn 10 percent more than women, women oftentimes cut their working hours or stop working outside the home altogether after they have a baby, Senior Lecturer in Sociology and Social Policy Heejung Chung wrote for The Conversation recently. Men's participation in the workforce, on the other hand, tends to increase when they become fathers.

Obviously, that can prove to be a major setback for women who want to return to work. Having gaps on their résumés and having otherwise fallen behind in terms of experience can certainly make salary negotiations and tackling the job market extra difficult.

And it's a problem to which society seriously needs to pay attention, because 16 million millennial women are moms, the Pew Research Center reported in January. These women — born between 1981 and 1997 — now "account for the vast majority of annual U.S. births." As such, the percentage of them trying to strike a balance between their professional lives and their personal ones is only going to continue to grow. And if wage disparities continue to worsen, then there will undoubtedly be more problems to face down the road.