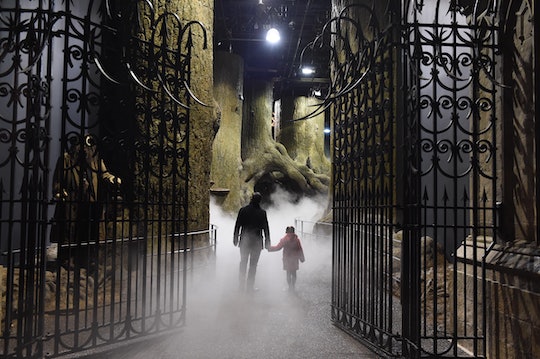 3 Brothers Got Matching 'Harry Potter' Tattoos For The Best Reason

Every parent wants two things, in my opinion; they want their kids to be close and they want them to be obsessed with the Harry Potter books. The second part might not be true for everyone, I suppose, but it really should be. Because the wizarding world of Harry Potter, Hogwarts and all, can't exist unless we focus, guys. So when these three brothers got matching Harry Potter tattoos, it was so incredibly pure for several reasons.

It all started with a birthday. It seems a middle brother wanted to do something special for his little brother to commemorate their bond for all eternity. What better way than getting matching tattoos, right? But not just any old ink would suffice for these three brothers... only Harry Potter inkdom would do. And for a very special, very sweet reason that will 100 percent make every mom out there cry so honestly, get ready. According to the middle brother's post on Imgur:

I am the middle child of three brothers, and for my little brother’s birthday, me and my big brother bought him and ourselves a tattoo of the Deathly Hallows symbol. Our Mom started reading Harry Potter to us when we were around eight, and read every single book aloud for us all the way up to high school. It sparked the love for books in all of us, and I have fond memories of those reading sessions.

I know; I ugly-cried too. As did many, many others I suspect. The post has over 390,000 views and 439 comments from other Harry Potter fans who love the idea.

The three brothers chose simple tattoos from the "Tale of the Three Brothers" that JK Rowling wrote about in Harry Potter and the Deathly Hallows. For the uninitiated, the tale follows three brothers who are given three special gifts by death, a cloak of invisibility, an elder wand, and a stone of resurrection. Potter fans know the story well, of course, and it's massive significance to the plot.

Those who have yet to discover the wonders of the Harry Potter world... I won't ruin it for you. Each brother chose their tattoos, according to the middle brother's post on Imgur:

Heart eyes all around.

In all seriousness, this was a lovely way to not only pay tribute to Harry Potter (praise be), but also to their family. Each other, yes, but also their mom who spent hours reading with them throughout their life. As a mom myself, I can only imagine how this gift made her feel.

Couple that with the fact that her kids are now potentially equipped to defeat the Dark Lord, and she's got to be one happy lady.