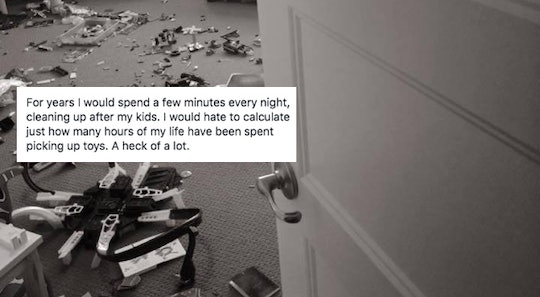 I have four sons and none of them care about living in a clean room. Not a single one. No matter what sort of tactics I try to use to encourage them to clean their room, the results have been desultory at best. They move their mess from one corner to another, or pile things in their closet, or they wait until I throw in the towel and resentfully clean up after them. It makes for a hostile living environment, which is why I'm so ready to get on board with this mom who has stopped cleaning up after her kids. Because cleaning up after my kids has begun to feel like a mountain I'm climbing with no summit, no end, and honestly? Just no purpose. So preach.

Heidi Hamm — whose post was shared on the Facebook page for Her View From Home — recently admitted that she is done cleaning up after her kids. Hamm shared a picture of a room littered with the usual toy debris and explained:

Today I shut a door. On this. For years I would spend a few minutes every night, cleaning up after my kids. I would hate to calculate just how many hours of my life have been spent picking up toys. A heck of a lot.

Hamm calculated that the hours were simply "too many." And I can almost guarantee you, it's definitely too many.

Hamm went on to write:

I love a clean house. I do. It's the one thing in my life that I feel like I have complete control over. If my environment is organized, life is just, better. But, kids. I love them. So much. They're amazing little humans. But they're messy. And they don't care. I don't get it. Clearly they are lacking in the clean gene department. I don't know how many times I have had the same conversation with them. Me: “How can you stand it? You can't even walk in here.” Kids: “Yes we can! We just play hopscotch around the toys.”

OK, honestly I'm not laughing but... yeah, this is such a kid thing to say. "Just play hopscotch around the toys." As funny as it is, it's also so incredibly frustrating to put so much effort into creating a nice home environment for your kids when they don't seem to care a whole lot about keeping things that way. And I don't know about you, but I've certainly researched clever ways to get the kids to help me clean up. None of them have worked.

Hamm was apparently on her hands and knees trying to organize one day, when her husband made a suggestion. As she wrote on Facebook:

One night my husband found me on my hands and knees, color coordinating the Lego. Did I mention I like things organized? I was exhausted. Which is a common state for me. "Why don't you just shut the door?" He asked. I stared up at him. It's possible it was more of a glare. I had been expecting him to join me on the floor, sifting through the mountain of Lego. Instead he offered me those seven words.

It seems those seven little words have managed to help other fed-up moms as well. "My kids were in charge of their own rooms...doors kept shut because it actually was a war zone to me," one comment on Facebook reads.

"My kiddos had to have their rooms and bathroom clean at 4:30 every Friday. That's it." another reader shared on Facebook. "I wished for perfection, but wasn't willing to fight the battle. 4:30 every Friday, I won. That was all I needed."

At the end of the day, as Hamm pointed out, everyone needs to prioritize, and "self-care" should be considered a top priority for stressed-out moms. She wrote:

Self care is closing a door. So now? The kids clean the play room once a week. Not me. Them. The other 95% of the time? It looks like this. And that's okay. Because this shut door in my life? Is one that I can live with.

A closed door is a compromise I can live with, too. The new rule? If the smells start wafting out from under the door, it's time to clean. That's not wrong, is it?